A Grade I Listed Building in St. Minver Lowlands, Cornwall 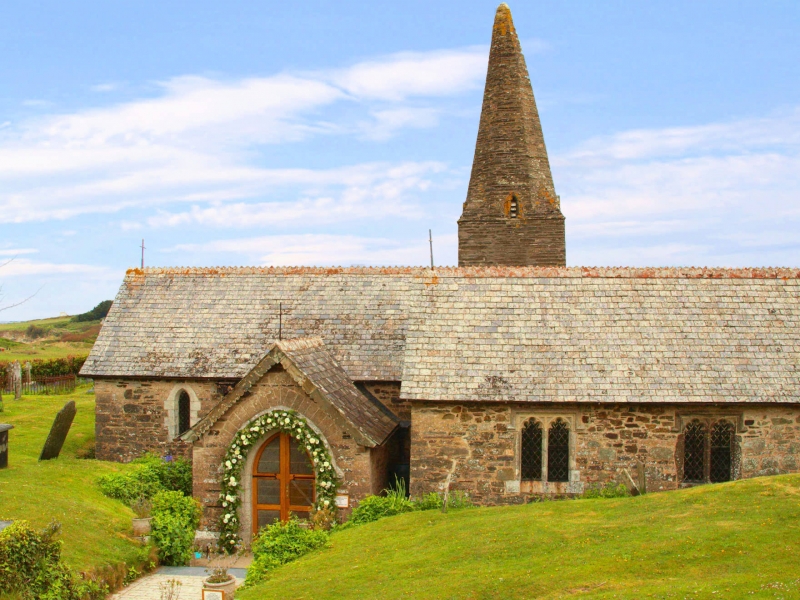 SW 97 NW ST MINVER
LOWLANDS
3/304 Church of St. Enodoc
6.6.69
GV I
Chapelry of St. Minver dedicated to St. Enodoc or St. Guinedoc. Circa C12 origins
with walls of nave, chancel, north transept and lower stage of north tower possibly
incorporating some early masonry. C12 font. Second stage of north tower and spire
possibly C13. South chancel aisle C15. Restored by J.P. St. Aubyn in 1863-4.
Stone rubble. Regular slate roofs with nave and chancel in one.
Circa C12 church probably comprised nave, chancel, north and south transept and
possibly north tower. In circa C13 a broach spire was erected on the north tower at
the north end of the transept. In circa C15 the three bay south chancel aisle was
erected, probably absorbing the south transept and a south porch was added. By the
C18 the church had become partly buried under sand and by the 1850's a clergyman was
annually admitted through a skylight in the north transept to perform a service for
the purpose of securing priviledges. The 1863-4 restoration of J.P. St. Aubyn
included the part rebuilding of the external walls to the nave, chancel, south
chancel aisle and porch; the renewal of tracery in the nave, and two windows in the
south chancel aisle and the renewal of the roofs and roof structure in the nave,
chancel, south chancel aisle and north transept.
Exterior: Nave with C19 tracery to west of porch and west window with C19 geometric
tracery of two lights. South chancel aisle with south wall part rebuilt, C19 2-light
window with cusped head and two circa C15 windows with hollow chamfered jambs and
cusped heads. East gable end part rebuilt. The chancel is built on bed rock with
east window of four lights with cusped tracery. To the north the low north transept
is pierced by a small lancet east window. North tower of two stages surmounted by
low broach spire of stone rubble with small trefoil headed belfry openings on four
faces. Gabled south porch with C19 2-centred arched opening. South door with circa
C14 2-centred arched opening with moulded jambs.
Interior: Roofs replaced in 1863-4. Circa C15 three bay arcade to south chancel
aisle with moulded type B (Pevsner) granite piers, 4 centred moulded arches, moulded
bases and caps. Furnishings largely replaced in 1863. Base of circa C15 rood screen
survives although restored and regilded; the uprights are moulded and carved with a
floral trail and the restored panels are decorated with blind tracery. Granite font
of circa C12 with round bowl, shaft carved with cable moulding and round base. The
bowl is lead lined and the plinth has been restored. Carved chest to north of font
mentioned in inventory of church goods in 1613. Catacleuse holy water stoup reset in
south wall with C15 arch above.
Leger stone of John Mably, 1687 in south porch.
Memorial to Ernest Edward Betjeman of Undertown (qv), father of Sir John Betjeman
1872-1934 on south wall. In churchyard, collection of mortars collected during
excavations of the surrounding area.
Medieval granite wheelhead cross with Maltese cross carved in relief, resited in
south porch.
St. Endocs was known as 'Sinkininny Church' having given the impression of sinking in
the sand. A detailed account of the restoration was written in 1919-21 by Mr. Hart
Smith Pearce, son of the vicar responsible for the restoration.
The church is closely associated with Sir John Betjeman, Poet Laureate from 1972, who
is buried in the churchyard, close to the Lych Gate.
Maclean, Sir John Parochial and Family History of the Deanery of Trigg Minor
in the County of Cornwall 1879, vol III
Church Guide
Pevsner, N and Radcliffe, E The Buildings of England, Cornwall 2nd ed, 1970
Sites and monuments Register, Truro, Cornwall.