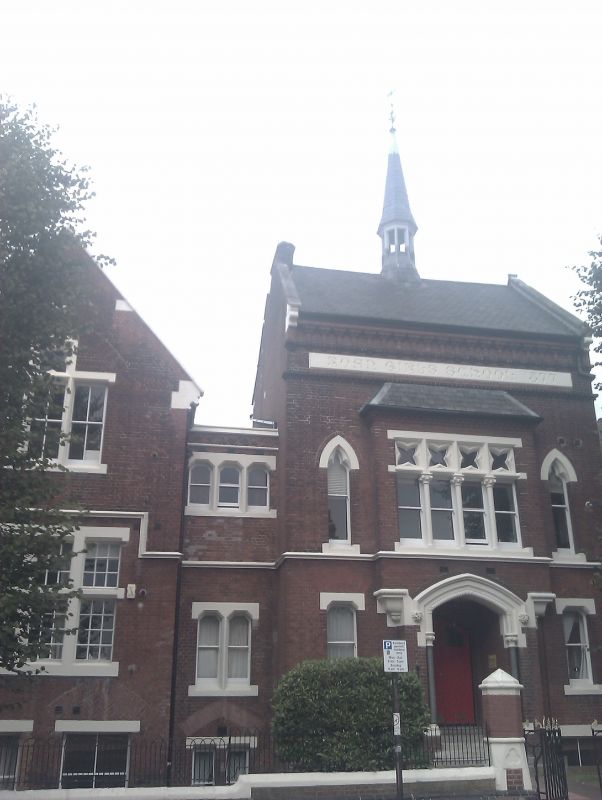 Former school. Built to the designs of Thomas Dinwiddy in 1877-8 in Gothic style
with additions to the east of 1906-7 designed by Alfred Roberts and on the west of
1936-7 by Percy B Darnatt. Built of red brick with stone dressings and slate roof.
Comprises central portion with link blocks and gabled wings. Central block of
2 storeys is surmounted by an octagonal bell-cote with spire and metal weathervane.
Gable ended with stone coping with kneelers. Brick Lombardic frieze and beneath a
stone band with the legend "ROAN GIRLS SCHOOL". 1st floor has elaborate 4-light
central bay with dogtooth cornice, quatrefoil mullions and engaged columns. This is
flanked by trefoliated lancets. Stone band. Arched doorcase with cable moulding
and engaged columns. Ground floor has Caernarvon arched windows. Each side has a
lower 2 storey brick link block with 3:2 Caernarvon arched windows to left and 2:2
similar to right. Left gable has stone coping. 1st floor 3-light window with
quatrefoil and ground floor 4-light mullioned and transomed window. Right gable
similar but also has the foundation stone. Attached to the right hand side is
Alfred Robert's extension of 1906-7, 2 storeys red brick with 3 sashes. To the rear
is a further extension of 1906-7 in red brick with flat roof with cast iron
balustrading and piers. Sash windows some cambered on the ground floor with
buttresses between. Built on to the left hand side is the 1936-7 extension by
Percy B Darnatt of red brick in flemish bond with mansard slate roof, 5 metal
casement and some 4-light windows with some ogee heads and Cinquefoil mouldings.
Attached to the front is red brick wall with 7 octagonal brick and stone gatepiers
with trefoil ornament and pointed caps with cable moulding. There has been
John Roan schools in Greenwich since 1677 but this is the most elaborate of the
2 surviving old Roan schools, for boys and girls. They were amongst the earliest
purpose built secondary schools in South East London and were built on the Prussian
System.