A Grade I Listed Building in Bolton, Cumbria 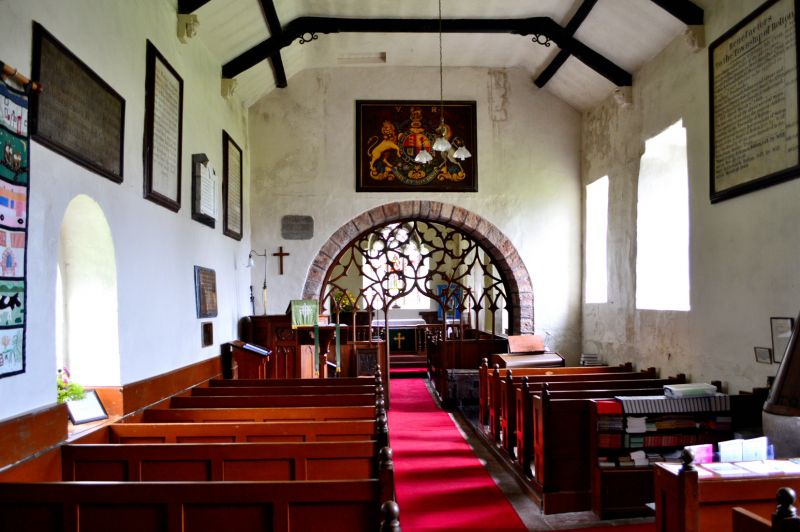 Parish Church. C12 and C13 with later alterations; restored in 1848. Coursed,
squared rubble with buttressing to east and west end. Graduated slate roofs
(chancel lower) with stone copings and C17 apex finials; gabled bellcote to west
end. 2 cell plan with former west tower now opened up to form part of aisleless
nave; original nave string-course visible above gabled C18 south porch. C12
south door has single roll-moulding to semicircular head with rosette decoration
to hoodmould. One jamb shaft survives. Each capital has a chip-carved abacus
with a low-relief figure to the side; the left hand capital has scallop
decoration, the right-hand one is moulded (possibly recut in C13). Partly
blocked north nave door is similar with cushion capitals and billet ornament to
hoodmould, but lacking both jamb shafts; 2 contemporary carved stones are set in
the wall above, one depicts 2 knights jousting and the other bears a badly
weathered inscription. On south side, single C18 window with semicircular head
to left of porch and 2 similar to right, all diagonally leaded. Narrower
chancel has square-headed C14/C15 window and 2 lancets, of which the second has
had its sill raised to accommodate a square-headed C17 doorway; single C12 slit
window, near east end in both north and south walls. 3-light east window is
largely C19 under C14 pointed hoodmould. At west end, dogtooth ornamented
trefoil heads to single-light windows on either side of central buttress
originally formed a C13/C14 quatrefoil panel. Internally, plain semicircular
C17 chancel arch has C19 traceried screen infill. Hemispherical font on square
pedestal with chamfered base and capital has conical, ribbed, wooden cover
initialled and dated T.G. W.H. 1687. Fastened to wall on east side of door is
wooden poor box with dated inscription (now partly painted out) "1634 The pour
mans box and churchwardens seat". Some re-used C17 panelling at west end with
gallery above. Various commemorative wooden panels on nave walls give details
of benefactors; an C18 memorial stone fastened externally to the south wall of
the chancel records the gifts of James Hanson and his wife to the village
school. A badly weathered C14 tomb effigy is set in the south wall of the nave
to the left of the porch.