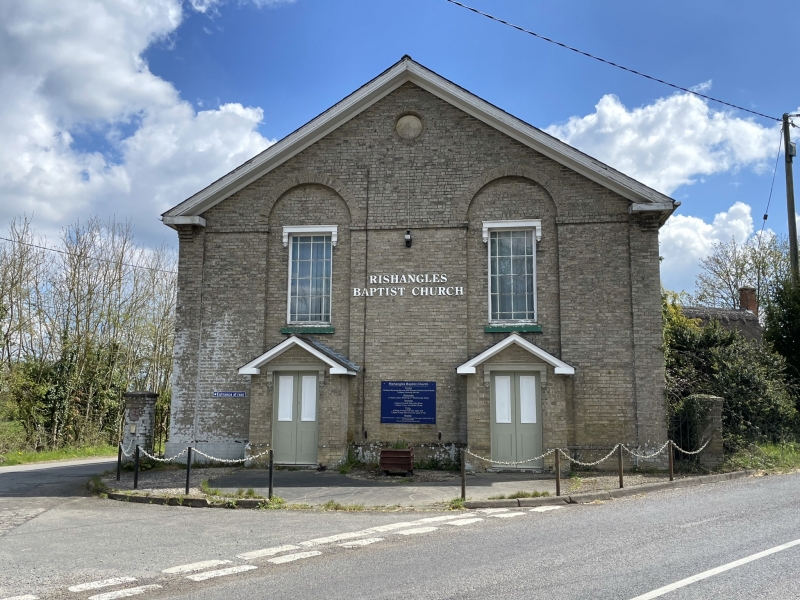 Church of England Parish: Thorndon with Rishangles All Saints

RISHANGLES EYE ROAD
TM 16 NE
4/51 Zion Baptist Chapel
(including attached
railings)
- II
Baptist chapel. Dated 1862. Red brick with white brick gable end facade to
west. Slated roof. The front gable and porches have moulded verges and boxed
eaves. Single storey. Symmetrical facade with flanking pilaster strips and 2
narrow arched recesses with a brick band at springing level. Each recess
contains a non-opening casement window with glazing bars under a flat lintol
supported on console brackets. Below each window is a gabled porch with 4-
panel door in 2 leaves. In the gable is an inscribed circular panel with the
date. 4-bay sides with larger windows of similar pattern within square-headed
recesses. Attached to the left and right of the facade are short lengths of
contemporary wrought iron railings terminating in square brick piers. Further
railings to south extend along the road frontage of the churchyard. Gallery
at east end has 5 removable panels and 2 lower panels with sliding shutters,
all later alterations. Re-seated 1985.