A Grade I Listed Building in Hentland, County of Herefordshire 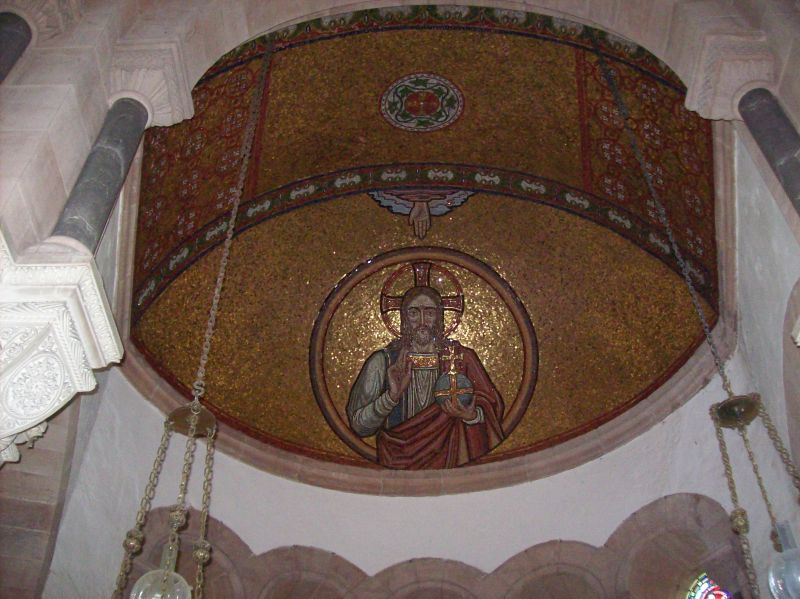 Campanile has four stages, deep Lombard frieze and pyramidal roof; on the east, entrance, side the ground stage has a round archway of two orders with cushion capitals, above are two unfinished projecting rock-faced blocks, on its south side an extremely thin loop; second stage has one small central round headed opening to each visible face; third and fourth stages have large recessed panels each with a Lombard frieze at the top, the third stage having two arched openings to each side divided by one column with a cushion capital, the fourth has three such openings with two columns to each side.

Cloisters have three groups of four bays, divided by two buttresses with off-sets rising to roll-moulded frieze, each group is divided into bays by paired columns carrying coupled capitals each with different grotesque and foliated carvings, round bases of columns are clasped by square corner projections from pedestals; west end of cloisters ends in two bays of similar openings but with labels and Lombard frieze above; facing south at the west end is a projection with archway of two orders and plain cushion capitals aligned on south end of narthex. Above the cloisters are the narrow arched south windows of the nave arranged 1:2:2:1, and therefore not in rhythm with cloister bays, beneath deep moulded eaves cornice; west gable has coped verge. West elevation is symmetrical, three central arched windows each with label and head stops separated by two weathered buttresses to narthex flanked by west end of cloister (already described) and a corresponding projection to left formed by north porch; moulded frieze and cornice; nave gable above narthex has a small recessed quatrefoil just under the apex below which are respectively rowed one central arched window, then three and a bottom row of seven such windows, corresponding with the end of three purlins to each slope are sculptured panels with grotesques and interlace designs.

North elevation of nave has three pairs of chamfered round arched windows, north wall of north porch is plain but its eastern return has paired columns with richly carved common capitals and moulded imposts under round arch with label and stops which are carved on the north side to represent a clenched fist and on the south, a snail; at east end of nave, beneath gable with oculus corresponding to an abbreviated north transept, projects the hipped roofed single-storey vestry with chamfered arched west doorway containing ledged door with elaborate strap hinges and on its east wall a raised panel on plain corbels projecting down between and below the cills of a pair of chamfered round-headed windows. East elevation has gable behind central apse and lower half-apses of chancel, fenestration is at high level with five arched windows to apse and three to each half-apse, in the centre of each apse is a central plain pilaster rising from high chamfered plinth, half-apses have dentilled eaves cornice with Lombard frieze beneath; main apse has large corbels beneath dentilled eaves, under the corbels is a band of interlaced blind arches with circular motifs between.

Interior of campanile has arched and chamfered doorway into north side of its south wall containing an oak door with enriched strap hinges and escutcheon; cloisters have gabled planked roof, transverse round arches on columns with cushion capitals, one unfinished, dividing the main bays, the arch at west end having double columns and capitals decorated with birds, grotesques and centaurs; marble tessellated pavement with sweeping design in red, blue and white, changing in front of south door to narthex into circular pattern in brown, grey and red, its design resembling that in north porch; south doorway of narthex has no tympanum, but a lozenge frieze around the archway, an inner band of interlace and birds, single attached columns, the capitals of which are decorated with monsters and interlace; the door has enriched strap hinges; against the rear wall are three pine benches, one to each main bay, in a similar style to pews in nave.

Narthex has panelled pine roof curving west down from nave wall to moulded frieze; three pairs of west windows, the inner arches of which have foliated capitals on three-quarter columns on bases with spurs; roll mouldings around north and south doorways, central hanging lantern with coloured glass, tessellated marble pavement divided into three squares, one for each bay, the central one with the inscription: "KEEP THY FOOT/ WHEN THOU GOEST/ TO THE HOUSE/ OF GOD"; west doorway has tympanum with Christ giving sign of benediction surrounded by symbols of the four Evangelists, deeply moulded arch is supported by pilasters with flat enriched capitals, double-leaved ledged doors with elaborate strap hinges.

Nave has open roof supported by three king-post trusses with three pairs of raking struts decorated by George Fox, at its east end an uncomplete truss with no tie beam on the two undecorated brackets projecting from north and south walls; north windows have inner arches supported on three-quarter columns.

Chancel has high chancel arch comprising two large grey marble columns on polychrome pedestals with white bases supporting large richly carved Byzantine-style capitals, which in turn carry attached columns with cushion capitals from which springs the austere arch; two similar arches spring at a lower level from the Byzantine-style capitals to north and south walls; this arrangement is repeated in the chancel, but with greatly enriched upper capitals, the transeptual area being dominated by four large columns and capitals beneath a central saucer-dome and the sides having transverse barrel vaults, below the south one a small shouldered arched opening with two colonnettes into the campanile; beyond the east columns a barrel vault leads to the main apse which has a hemi-dome occupied by gold mosaic of the Pantocrator; to south-east and north-east are quarter-domes to half-apses beyond splayed arches; inner arches of apses have roll-mouldings and are carried on Byzantine-style capitals, the five of the main apse being larger. Under east window is a brass plaque with red
and black lettering inscribed:

The five windows of the main apse were possibly designed by Seddon and show Christ as Lux Mundi flanked by the four apostles. Marble altar has brown cross between lapis lazuli panels and five consecration crosses on the mensa; tessellated chancel floor; organ on north side inscribed "NICHOLSON & CO/ ORGAN BUILDERS/ WORCESTER; ERECTED BY/ INGRAM & COMPANY/ ORGAN BUILDERS/ HEREFORD"; early C17 chair with recessed arcade on back, guilloche ornament, caryatids to back and arms, central panel with gryphon; choir stalls to north and south are oak, the inner desks with Ionic capitals, the north set in front of the organ have two combined benches and desks with scrolled end panels, on the south side is one combined seat and desk behind which is a six-seater with gabled hemi-domed niches, palmette frieze in the niches and fluted pilasters dividing each niche, the westernmost seat has arm rests, one with a female head, on and between the gables are the carved figures of saints arranged:

The westernmost seat has in front of it an elaborately carved individual desk with two front panels, niches similar to those of the stalls containing two scenes depicting "S Dubricius, Archbishop of Llandaff" and the "Birth of St Dubricius" separated by twisted columns, the end panels are scrolled with further scenes: to the west "S DUBRICIUS casting out the devil" and to the east "S DUBRICIUS & the miracle of the wine" with a cask inscribed:

Seven brass hanging oil lamps are distributed around the chancel, each with three chains and winged lions. Nave has pulpit, with ramped sides in the form of an ambo, of white marble with three maroon porphyry panels divided by plain pilasters under an acanthus frieze and moulded cornice; lectern is brass in the form of a tripod with twisted shafts and finials, a central shaft rising up to the book-rest; communion rails, beneath chancel arch, are oak in two separate parts each with five short Ionic columns and egg-and-dart frieze; in the centre of the south wall a marble wall monument for the 15 of the parish who fell in the 1914-18 War; font has one step up to low chamfered square base with spurs to corners, four marble columns and central drain form stem, octagonal bowl with chamfered lower edges, each face has recessed quatrefoil panel, designs in the panels include daffodils, leaves and the Star of David; stained glass in centre window of north side depicts two martial figures, one holding his sword, the other a censer; in the west gable are saints; angels and St Dubricius; beneath towards the south is a copy of the painting "Madonna Della Secciola/ Raphael/ Pitt"; the inner side of the west door has a roll moulding and tympanum containing two crosses and an interlace design.