A Grade I Listed Building in Tattershall, Lincolnshire 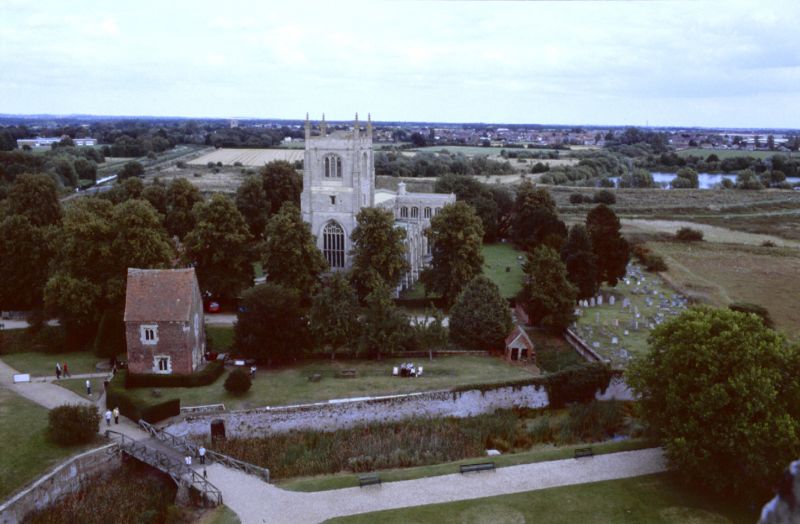 Collegiate and parish church. 1440-1500, by Ralph Cromwell.
Licensed in 1439 by King Henry VI to convert a Norman Parish
church into a Collegiate Church, for 7 priests, 6 secular clerks,
6 choristers and 13 poor old people in the almshouses. Completed
by William of Waynflete. College demolished 1545. Most glass
removed to Stamford in 1754. Restored 1893-97. Ashlar and lead
roofs. Western tower, clerestoried nave, aisles, transepts,
chancel, north porch. 4 stage tower, plinth, moulded string
courses, plain parapet, angle buttresses and pinnacles. Belfry
stagehas triple louvred lights in a 4 centred arched surround to
each side. Panelled and traceried double doors in a deeply
recessed double concave arched surround with shields and
quatrefoil in the spandrels and an outer panelled order with
lozenges. There are 2 vertical traceried panels to either side
of the doorway and above a cusped frieze with shields. Above a
large 5 light transomed window and a rectangular single light to
third stage. On north side of tower a large painted clock face.
To either side are large 4 light windows to the aisles. The
church has a bell moulded plinth, plain parapets and stepped
buttresses with pinnacles. The north side has 5 large 4 light
windows. The clerestory has 4 pairs of 3 light windows in 4
centred arched surrounds. Gabled south porch has 4 centred outer
arch with quatrefoils to the spandrels and to the right a niche
for a stoup. Above the arch is a square panel containing the
arms of Bishop Waynflete, surmounted by an empty ogee headed
niche with cross fleury. Side benches and 2 light windows. C15
roof with moulded principals. Inner door, panelled with
traceried heads and ogee wicket. Inner arch matches the outer.
North transept has single 4 light window to the west and a 6
light transomed window to the north, and the east side 2 four
light windows. The sides of the transept are clerestoried with
paired 3 light windows. The chancel has 5 transomed 3 light
windows. The east window is transomed with 7 lights and empty
rib vaulted and embattled niche above. The south chancel wall is
as the north, but at the base are the ledges for former cloister
roof. The south transept is as the north with the addition of a
doorway in the south wall with moulded surround. The south aisle
matches the north and has a doorway as the north but without a
porch. Interior. Ashlar interior. 4 bay north and south
arcades with taller single eastern bays into the transepts.
Lozenge shaped piers on tall bases, clustered triple shafted
reveals, octagonal imposts, hollow chamfered arches. Between the
arches round wall shafts ascend to octagonal corbels, supporting
the tie beams of the contemporary roof which has angel supporters
and brattished principals. Tall panelled tower arch with double
wave moulded continuous surround and tall bell moulded base. In
the sides of the tower are deeply hollow chamfered arches,
opening into the aisles. The aisle roofs match that of the nave
and have foliate corbels. In the south transept chapel is a
piscina with ribbed vault and frieze of roses to the cill. The
ashlar base with pierced quatrefoils of the original screen
survives as do 2 pierced panels of the woodwork. In the south
wall of the north transpet is a further vaulted piscina with oak
leaf frieze to the cill. Before the chancel arch is a C16 stone
pulpitum having central double doors with decorative muntins,
traceried heads to the panels, set in a 4 centred arched surround
with shafted reveals and cusped head. Flanked by 2 recesses with
similar arches, the one on the right is pierced with 3
quatrefoils. Above the arches are 2 tiers of blank cusp headed
panels, divided by half round ribs. The top of the screen is
embellished with unusual enriched trefoil brattishing. Panelled
passageway leads to Collegiate chancel. On the eastern side of
the screen is a projecting canted gallery with blank panels and
brattishing matching the west side. Panelled chancel arch with
shafted reveals and annular capitals. Chancel roof has arched
ties resting on octagonal corbels of angel supporters carrying
shields. The roof has brattished wall plates and principals, and
pierced panel traceried spandrels. In the south wall is a triple
sedilia with piscina beyond having 4 centred arched heads with
ogee crocketed canopies, pinnacles and a frieze decorated with
fabulous beasts and a trefoil brattished top. In the east window
the 7 lower window panels contain C15 glass, some reset, all that
remainedafter the Earl of Exeter removed the rest to Stamford in
1754. Fittings. Many reused pieces of C15 woodwork in prayer
desks and sides of chancel pulpit. The octagonal nave pulpit
with decorative panel sides appears to be original. The font is
octagonal with swept base having traceried panel sides. The bowl
is chamfered below and plain. Monuments. In the north transept
are 6 brasses, 3 to Collegiate clergymen, 2 half sized showing
the deceased robed in full vestments. William Moor, B.D.,
d.1456, Joan, Lady Cromwell, d.1479, depicted in rich costume and
surrounded by figures of saints. Matilda, Lady Willoughby
d'Evesby, d.1497, also life sized and attended by saints. A
warden of the College, 1510-1520, possibly Henry Hornby, attired
as a priest with cassock, surplice and fur tippet. William
Symon, d.1519, priest.