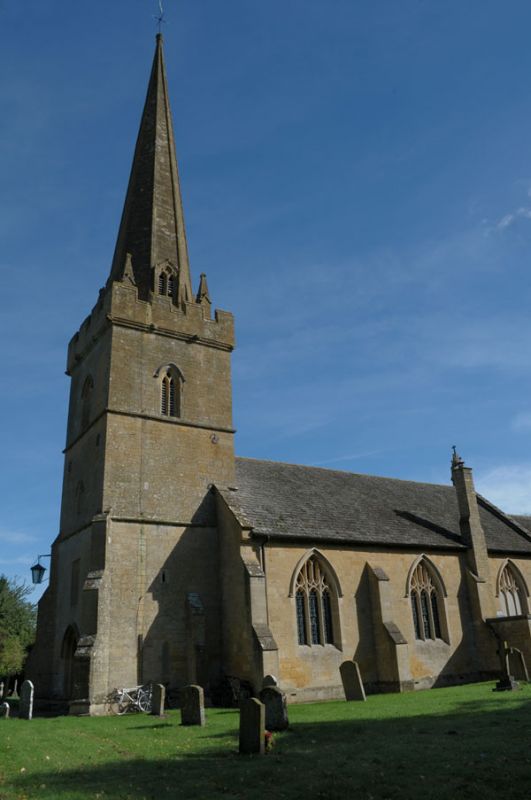 SP 0738 CHILDSWICKHAM CP -
7/152 Church of St Mary
30.7.59
- II*
Church. C13 with C12 remains and C14 additions. Restored 1870 when north
and south walls were taken down. Chancel restored in 1872. Squared lime-
stone with stone slate roof. Comprises a west tower with spire, nave, north
transept, south boiler house, and lower chancel. The ribbed spire has
lucarnes of two trefoiled lights, and corner pinnacles, set back behind
an embattled parapet. The tower is of three stages with diagonal buttresses
to the lower stage and has bell openings of two trefoiled lights with a foiled
opening under a pointed head. The middle stage has a similar west window set
within a larger blocked opening. Above the west doorway is a window of two
trefoiled ogee lights under a flat head. The west doorway is pointed and
moulded in two orders with sunk quadrant mouldings. The south wall of the
nave is of three bays and has C19 windows of three cinquefoiled lights under
a pointed head with Perpendicular tracery. Against the east bay is a boiler
house with parapet and chimney. The north wall of the nave is of two bays
and has similar windows. The north wall of the transept has a window of two
pointed lights with a quatrefoil over, which appears to be early or mid-C19.
In the east wall of the transept is a C19 moulded pointed doorway and a window
with round head. The east wall of the nave is coped and has a stone bellcote.
The south wall of the chancel has a window of three trefoiled lights with
Perpendicular tracery within a deeply-splayed opening. In the north wall of
the chancel is a blocked arched opening. The east window is of three cusped
lights and has a cusped circle under a pointed head. Interior: the nave is
entered from the tower through a restored doorway of c1130 - 40 which has a
round arch with a roll moulding between two square orders and angle shafts
with cushion capitals. Between the nave and the middle stage of the tower
is a window of two round-headed lights. The nave roof is C19 and has king-
posts rising from arch-braced collar trusses. On the north and south sides
of the nave are niches with cinquefoiled heads and crocketted gables. The
chancel arch is pointed and is hollow-chamfered between two wave mouldings.
The inner order springs from engaged shafts. On the north side of the chancel
is a blocked archway into a former north chapel. At the east end of the chancel
are early C13 triple clustered shafts with trumpet-scallop capitals, intended
for rib vaulting. The pulpit and choir stalls re-use some woodwork with carved
tracery decoration. The restored octagonal font appears to be C17. (BoE, p 118).