A Grade I Listed Building in Cropredy, Oxfordshire 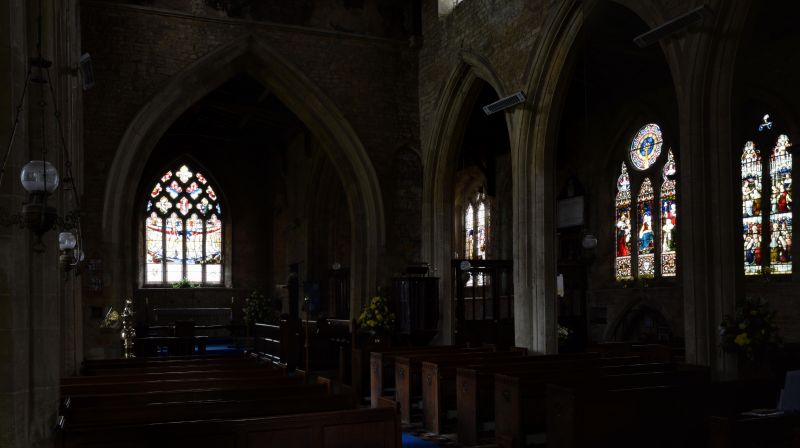 INTERIOR, Nave
has a 5-bay tie-beam roof on corbels, ridge and side purlins, arched braces.
Chancel has a similar roof, partly restored, Chancel has a Decorated and Early
English piscina, Doorway into vestry has a plank and nail door with wrought-iron
hinges. Priest's room (reached via ladder stair) has word panelling. Screen on
north side of the chancel has C14 fragments with flowing tracery. Another screen
around the chapel on the south has the initials of Ann Danvers and the date
1539. C17 communion rail. Nave has tall 4-bay Decorated arcades with piers
without capitals. Perpendicular piscina in north aisle (without a drain) . South
aisle has 2 arched tomb recesses. two fonts, one octagonal C14, the other 1853.
Late C15 style polygonal pulpit said to be dated 1619 (Kell's Directory). Rare
pre-Reformation C15 brass eagle lectern. Fragments of a painted Last Judgement
over the chancel arch. C13 chest with fine decorative ironwork. Chancel has
memorials to Francis Stainer (vicar) d.1735 and William and Abigail Taylor of
Williamscot House d.1733. Wall plaque to Richard H. S. Crossman of Prescote M.P., 1906-1974. South aisle and chapel have memorials to the Danvers and Gostelow
families of Prescote and the Caulcott, Taylor and Loveday families of
Williamscot. Freestone monument in south aisle to Walter Calcott d.1582 and
Alice Calcott. South wall of south aisle has remains of a stone figure of a
Knight in armour. Brass in nave to Priscilla Plant d.1837. North aisle has
classical style marble wall memorial to John Danvers of Prescot, MDCCXXI.
Fragments of C15 glass in north aisle. East window by Lavers. Barrant and
Westlake 1877 and memorial windows by Heaton, Butler and Bayne.