Church of St Martin in the Fields 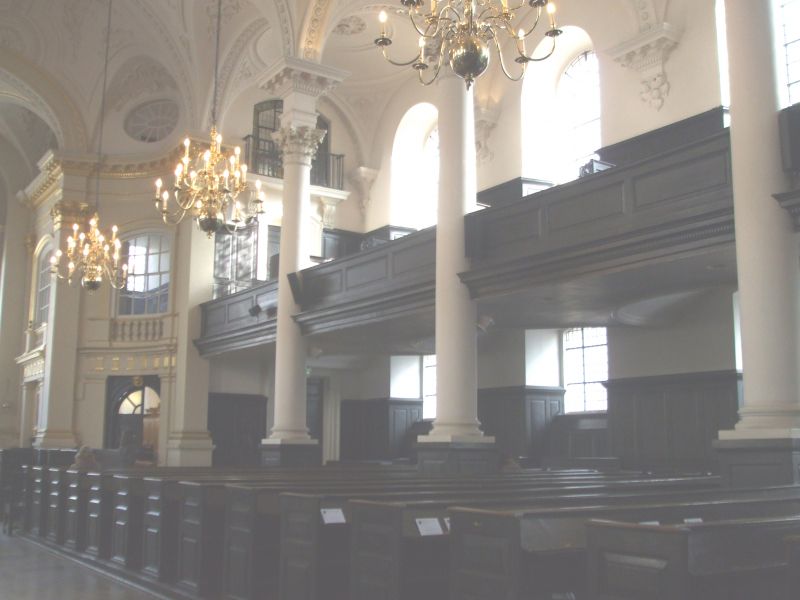 Entry Name: Church of St Martin in the Fields

TQ 3080 NW CITY OF WESTMINSTER TRAFALGAR SQUARE, WC2
72/135
Church of St Martin-in-
24.2.58 the Fields
G.V. I
Parish Church. 1722-26 by James Gibbs. Portland stone, leaded roof. Highly
influential design combining (incongruously) Vitruvian temple with steeple
and very restrained, minor use of Baroque detail (in tactfully judged political
contrast to St Mary-le-Strand). Giant Corinthian hexastyle, 2 column deep
portico, on podium of steps, carrying the pediment-gable end continuation of
the roof line. The west front proper has one extra bay each side (of portico)
and staged tower and steeple rise above it behind the portico. These end bays
are flanked by giant Corinthian pilasters and their returns are emphasised as
the tower bay by giant Corinthian columns in antis; 5 bays of 2 tiers of
semicircular arched "Gibbs surround" windows then express the body of the
church, terminating in a similarly emphasised bay to that of tower. Large
Venetian east window. Fine interior, evolving from Wren's St Clement Danes and
St James's Piccadilly, with a giant order as used by Hawksmoor carrying arches
and the segmental tunnel vault, the inevitable galleries butting into column
shafts. The chancel is narrower than the nave with noteworthy and theatrical
feature of boxes to sides (that to north the Royal Pew) set on splay as a
transition between nave and chancel. Fine plasterwork by Artari and Bagutti,
fittings and momuments, lowered box-pews, etc. It was Nash who isolated the
church as part of his West Strand Improvements, integrating it with the
composition of Trafalgar Square.
Survey of London; Vol XX
Georgian London; John Summerson.
London Vol I: N Pevsner.