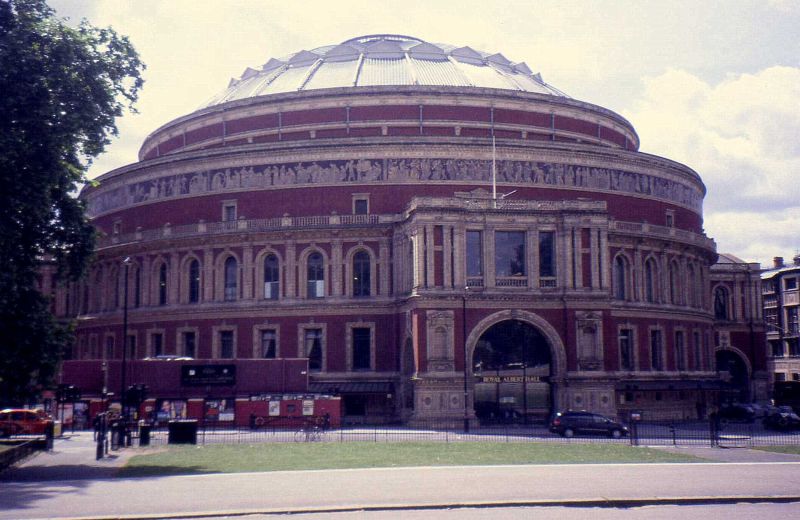 24.2.58
.
GV
I
Public hall of 1867-1871 designed by Captain Fowke; completed by Major-General H Y D Scott. Red brick and buff terracotta with a glazed domed roof. Designed in the Italian Renaissance style with an elliptical plan.

Five stages with two main tiers of windows, the lower square-headed, the upper round-headed, with decorative pilasters between and a mosaic frieze of figures above. Entrances are to the north, south, east and west, within projecting two-storey porches with elaborate moulded pilasters, balustrades and cornices. Good arcaded interior. Ceiling altered.

Historic note: In December 1905 Sir Henry Campbell Bannerman made his first speech as Prime Minister in the Hall. He was interrupted by Annie Kenney, Theresa Billington and Sylvia Pankhurst, all members of the Women’s Social and Political Union (WSPU), the militant suffrage organisation formed by Emmeline Pankhurst in 1903. This was the WSPU’s first militant act in London and took place not long after Annie Kenney and Christabel Pankhurst had become the first suffragettes to be imprisoned after a similar interruption of a meeting in Manchester. By 1908 the WSPU had grown in size and was able to fill the Hall for its own meetings. The Union used the Hall on several occasions, and it was there in October 1912 that Emmeline Pankhurst famously incited her followers ‘to rebellion’ urging them to be militant ‘each in your own way’, and the militancy they adopted included arson and criminal damage. As a result, by April 1913, the Hall’s trustees had banned the WSPU from holding future meetings there.

In March 1918 the Women’s Party (as the WSPU was now known) held a final meeting in the Hall to celebrate the passing of the Representation of the People Act the previous month.