Birkenhead War Memorial (including flagpoles to north and south) 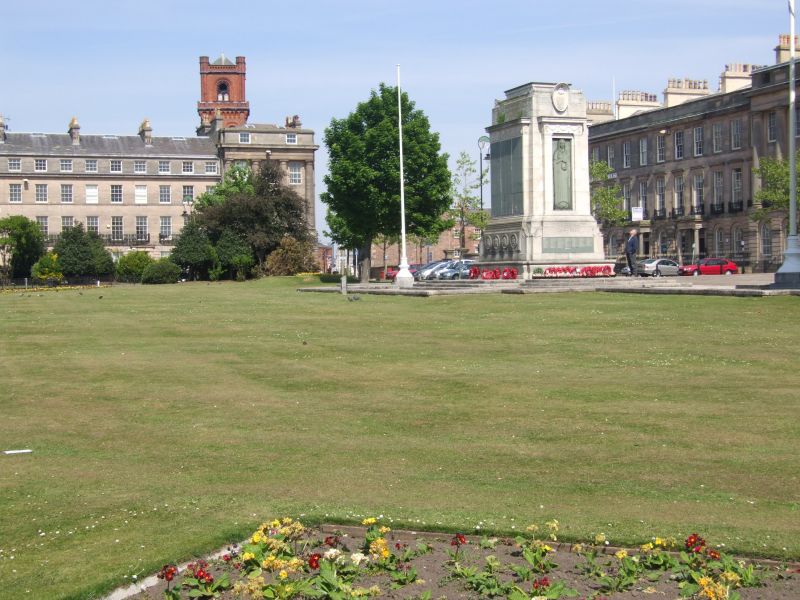 The memorial stands in Hamilton Square, created when Birkenhead’s grid-plan was laid out. It is constructed in Portland stone with Westmorland green slate relief figures and name panels. The memorial is in the form of a pylon, supported on a moulded pedestal and plinth, standing on a three-tier stepped platform. The structure is crowned with a sarcophagus on a scrolled base. The memorial stands within a paved area enclosed by granite kerbs.

The longer east and west sides carry polished green stone slabs carved with the 1,293 names of the fallen, each set within a projecting frame beneath an entablature with a festooned frieze. On the pedestal below are carved emblems of the Army, Navy, Air Force and Merchant Navy. Above the cornice on the east side is the inscription: IN MEMORY OF THE MEN OF BIRKENHEAD / WHO GAVE THEIR LIVES IN THE GREAT WAR, and on the west side: ALL THESE WERE HONOURED IN THEIR GENERATIONS / AND WERE THE GLORY OF THEIR TIMES (Ecclesiasticus 44:7). The base of the pedestal on the east side is carved: 1939 – 1945 WAR/ THE BOOK OF REMEMBRANCE MAY BE INSPECTED IN THE TOWN HALL.

The shorter north and south faces have carved stylised female figures in Egyptian dress: that to the north displaying the Next of Kin plaque carved: HE DIED FOR FREEDOM AND HONOUR; that to the south holding a laurel wreath and a palm branch. These are set within pilastered surrounds with entablatures matching those to the longer sides.

The parapets have carved oval escutcheons inset with the borough arms, and are carved to either side 1939 and 1945. The re-entrant angles of the pedestal are inset with scroll and festoon ornament. The pedestal fronts carry polished green slate slabs which are carved with further names.

The shafts of the two cast-iron flagpoles have heavy moulded bases with festoon ornament. They stand on octagonal stone bases carved with inset panels, on a stepped plinth. These form an integral part of the composition.

This List entry has been amended to add the source for War Memorials Online. This source was not used in the compilation of this List entry but is added here as a guide for further reading, 27 January 2017.

The aftermath of the First World War saw the biggest single wave of public commemoration ever with tens of thousands of memorials erected across England.  Birkenhead War Memorial was paid for by public subscription following a competition organised by the war memorial committee. The winning design by Lionel Budden was selected by the assessor Major Gilbert Fraser, President of the Liverpool Architectural Society, who praised Budden’s ‘classical form which will harmonise with the environment the Square provides'. The Liverpool-born sculptor George Herbert Tyson Smith (1883-1972) undertook the stone carving and also modelled the flagpole bases.

Tyson Smith was a specialist in architectural and public sculpture. Apprenticed at fourteen to a firm of monumental masons, he went on to study at Liverpool University School of Applied Art (or the Art Sheds) where he was taught drawing by Augustus John. In the First World War, he served in the Royal Flying Corps, setting up his own studio on his return in 1919. His early naturalistic style was replaced by an enthusiasm for Egyptian and early Greek archaic sculpture. His flat, linear, hard-edged style, as seen in the figures on the Birkenhead memorial, was also strongly influenced by Ivan Mestrovic and Eric Gill. Tyson Smith undertook sculptural work for many war memorials, most notably Liverpool Cenotaph, also in collaboration with Lionel Budden, and at Accrington and Southport. His brother-in-law, the sculptor and medallist Edward Carter Preston, designed the Next of Kin plaque which was issued to the close relatives of the fallen of the First World War and features on the Birkenhead memorial.

The memorial was unveiled on 5 July 1925 by General Sir Richard H K Butler KCB KCMG and dedicated by the Bishop of Chester.

Birkenhead War Memorial and the associated flagpoles to the north and south are listed at Grade II* for the following principal reasons:
* Historic interest: as an eloquent witness to the tragic impact of world events on the local community, and the sacrifices it made in the conflicts of the C20;
* Architectural and sculptural interest: an impressive composition with finely carved stonework and figurative panels by the distinguished sculptor Herbert Tyson Smith;
* Group value: the memorial occupies a prominent position in Hamilton Square, a civic space of outstanding architectural interest, and has strong visual relationship with the Town Hall (Grade II*), the Grade I-listed Georgian terraces around the square, and the Victoria Memorial (Grade II) at its centre.