A Grade I Listed Building in Godshill, Isle of Wight 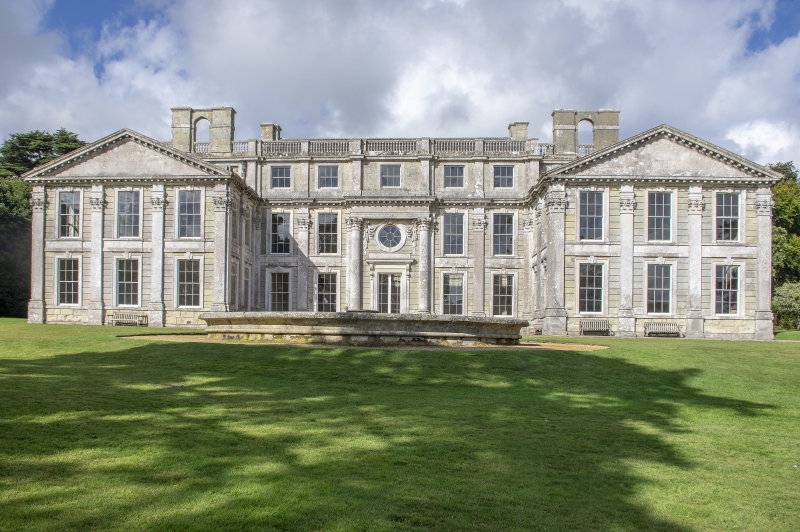 Derelict mansion. Built 1701-13 by Sir Robert Worsley,
continued by Richard Worsley in the 1770s and completed by the
Earl of Yarborough in the 1820s. Under restoration by English
Heritage at time of survey. Architect now considered to be
John James, altered by James Wyatt in the 1770s and with
porte-cochere added in the early C19. Built of Isle of Wight
greensand ashlar with Portland stone dressings and slate roof
with stone chimneystacks. Plan is central 3 storey square with
4 projecting pavilions at corners, linked by an 1830s
colonnade on the south front and porte-cochere of 1830s on
west front. The Principal or East elevation comprizes a
central portion of 3 storeys 5 windows with projecting end
pavilions of 3 bays with 2 bays of blank niches in sides of
pavilions. The central part has a balustraded parapet
incorporating 2 end chimneystacks paired to form triumphal
arches. Five restored 6-paned windows with plain pilasters
between the bays. Modillion cornice between 2nd and 1st
floors. Giant Corinthian pilasters between windows and Giant
engaged columns flanking entrance with deep cornice above.
Central oculus with satyr mask and drapery at sides. Large
door with cornice and console brackets. 2 steps. Lower windows
are restored 12-pane sashes in moulded architraves with triple
keystones. 1st floor windows have aprons. Rusticated plinth.
Pavilions have pediments with modillion cornices, giant
Corinthian pilasters and 3 renewed 12-pane sash windows.
Aprons to 1st floor windows. Rusticated plinth and bands.
Inward facing sides of pavilions has 2 blank round-headed
niches in moulded architraves with keystones. South elevation
has a 3 storey central portion with balustraded parapet. 7
window openings (without sashes at time of resurvey) Modillion
cornice between 1st and 2nd floors. 7 window openings to lower
floors with keystones. Projecting pavilions of 2 storeys at
each end linked by a colonnade of 6 Tuscan columns with cast
iron balcony above added by the Earl of Yarborough in the
1830s. The pavilions are rusticated with giant pilasters at
each end. 1st floor pavilions each have one 12-pane sash and a
round-headed niche on the ground floor. Plinth. West elevation
also has a central 3 storey block with 5 bays and balustraded
parapet. Moulded cornice between 1st and 2nd floors. Keystones
to lower windows. 2 end projecting pavilions of 2 storeys with
pediments, end giant pilasters and 3 window spaces with
keystones. Sides of pavilions have 2 blank niches. Attached to
the rear is a 1 storey porte-cochere with 2 entablatures with
Tuscan columns. North elevation is of plain ashlar. Central
block of 3 storeys with cornice and 5 window spaces.
Projecting end pavilions of 2 storeys with 2 bays. The North
East pavilion, which included the kitchen was only built in
the 1770s. Attached to this is a portico with reused pilasters
and cornice which led to a now demolished laundry, added by
the Earl of Yarborough. Great Hall retains marble floor and
some scagliola columns of the 1770s by James Wyatt. The
kitchen retains a large stone fireplace. Other internal
fittings were removed after the building became derelict. A
late C18 chimneypiece is known to be at Fulham Palace.

One of the most significant houses of the English Baroque
Style. Scheduled Ancient Monument.
(L O J Boynton: Appuldurcombe House (English Heritage
pamphlet); C W R Winter: The Manor Houses of the Isle of
Wight: 20 - 27; B.O.E. "Hampshire and the Isle of Wight": 729
- 730).