A Grade II* Listed Building in Calbourne, Isle of Wight 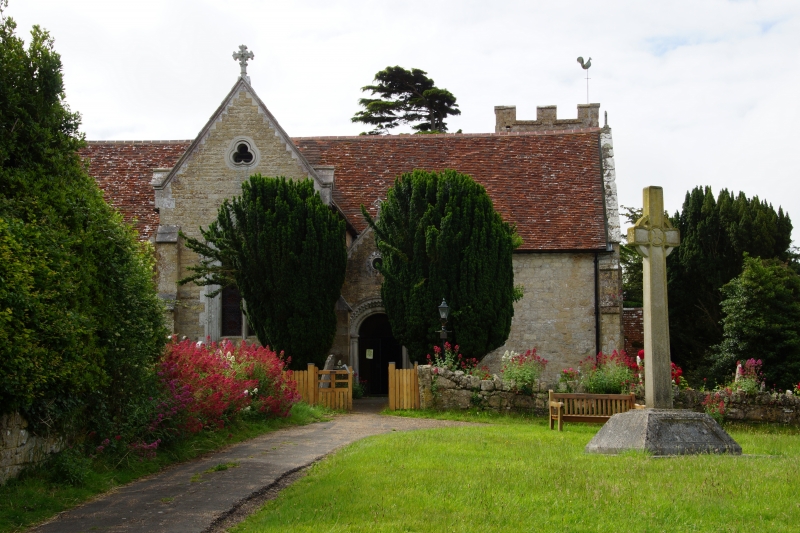 Parish church. Mainly C13 but with south west tower rebuilt in
1752 and the North or Barrington Chapel added in 1842 by A.F.
Livesay who began restoring the church in 1836. Built of Isle
of Wight stone rubble with some flintwork and tiled roofs. 4
bay nave slightly lower 4 bay chancel, south west tower, south
aisle, north chapel and north and west porches. Nave is C13
with west wall of flint, the rest of coursed rubble. Ashlar
quoins and coping with cross-shaped saddlestone. Lancet
windows, the west wall having 1 large lancet with smaller ones
below. West porch is probably C17 with pointed arch and stone
coping with kneelers. South west tower of 3 stages with
crenellated parapet. The upper stages were reconstructed in
1752, with a stone tablet commemorating T. Hollis & J.
Casford, churchwardens at the time after remaining in ruins
since a fire of 1683. lancets to upper stages. The lower stage
was reconstructed again in 1842 with Caernarvon arched window
and doorcase and buttresses. South aisle has 2 lancets and 2
buttresses. The east window has 2 lancets with quatrefoil
above and the east wall is of flint. Chancel is C13 with part
stone rubble and part flint. 4 stone lancets and pointed
arched door. East window has 2 stone lancets and trefoil
window above. North chapel is by A.F. Livesay 1842. Coursed
rubble gable end with florid cross-shaped saddlestone. Arched
window with 2 lancets and circular window. Buttresses. North
porch is C19 in Neo-Norman style with gable, round-headed arch
with zigzag moulding and engaged columns and circular window
above. Interior: Nave has C13 font, table top type of Purbeck
marble. Flat arches and geometrical panels. 3 bay south arcade
is of 1842 and there is a C19 roof. The south aisle has
hatchments and the late C14 brass of a knight with a dog at
his feet, William Montague son of the Earl of Salisbury killed
in 1379 while jousting with his father. The Barrington chapel
has 12 C19 wall tablets with trefoliated heads and shields to
members of the Barrington family. Chancel has C13 pointed
chancel arch. C19 boarded roofs. John Fisher D.D. Bishop of
Salisbury from 1807 to 1825 was at one time rector of
Calbourne, as was Nicholas Tindal, the historical writer who
became rector in 1740.
(V.C.H. Hampshire & The Isle of Wight: 218; Pevsner: B.O.E.
Hampshire and the Isle of Wight: 736).