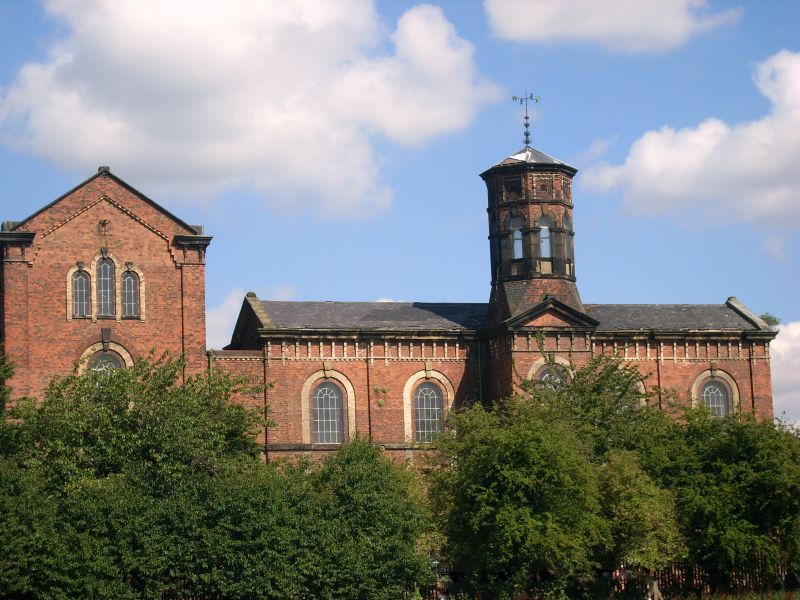 Water pumping station, later waterworks museum. 1863, by Thomas
Dale, engineer. Western addition 1876. Remodelled internally,
east porch added and chimney demolished, 1956. Late C20
alterations. Red brick with yellow brick, moulded brick and
ashlar dressings and slate and corrugated asbestos roofs.
Main block and western addition have plinth, first-floor band,
and moulded cornice with machicolations. Bays are divided by
full height pilasters, and windows are set in shallow
round-arched recesses. Windows are mainly round-arched
metal-framed glazing bar casements with keystones.
Main block, 2 storeys; 5-window range. Projecting central
square stair tower, 2 stages, topped with an octagonal lantern
with broaches, round-arched openings and a shallow pitched
roof with a weather vane. Tall round-arched window and above,
a round glazing bar window with 4 keystones under a pediment.
Ground floor right return has a smaller window. On either
side, 2 windows. Below, a similar smaller window and beyond, a
taller window. Rear has 5 windows to the first floor. Right
return has pedimented gable with a plain round window and
above, a round-arched window. Below, a pedimented brick porch
with glazed double door and fanlight with keystone. Single
window on either side.
To left of the main block, a single bay link building with a
window between floors, and below it, a pair of board doors.
1876 addition, to west, 3 storeys; 5-window range.
Ground-floor windows are taller. Second floor has pairs of
smaller round-arched windows. Rear has similar fenestration to
the upper floors. Right return has a round-arched window and
above it, a graduated triple window. Below, a round-arched
door with a round window above it. Left return has a blank
round window in the gable and below, a glazed double door with
fanlight, and above it, a round-arched window.
At the rear, former boiler houses, single-storey; 11-window
range. Windows are set in panels divided by pilasters. East
side has 7 windows, then 2 blocked openings with inserted
doors, then a window, and finally a blank bay. West side has
blocked openings to left and to right, a lean-to projection
with 2 windows flanked to left by two C20 doors with fanlights
and to right by a segment-headed door and another window.
INTERIOR. 1876 addition has iron trussed roof with wooden span
beams. A hand cranked travelling crane runs on tracks at the
top of the walls. In the south-west corner, a cast-iron spiral
stair with first floor landing. Single acting Cornish beam
engine with wrought-iron beam pivoted on 4 cast-iron Doric
columns linked by segmental arches. Steam chest and valve gear
are carried on a similar pair of columns, and the first floor
landing gives access to them and to the piston rod. Fluted
cast-iron pump cylinder has corniced top. Pump, ram and
balance weight are carried by a girder frame set in a
cast-iron well lining. The engine worked from 1876 to 1910.
This building and engine are representative of C19 municipal
water works, and illustrate how "...an architecture founded in
objective functionalism ... could be used to create a polite
and elegant building whose purpose was nevertheless
unmistakeable." (Douet).
(Yorkshire Water Museum: Springhead Pumping Station - A Brief
Description; Bristol Polytechnic T&CP Working Paper No.28:
Douet J: Temples of Steam: Bristol: 1992-: 15, 23).