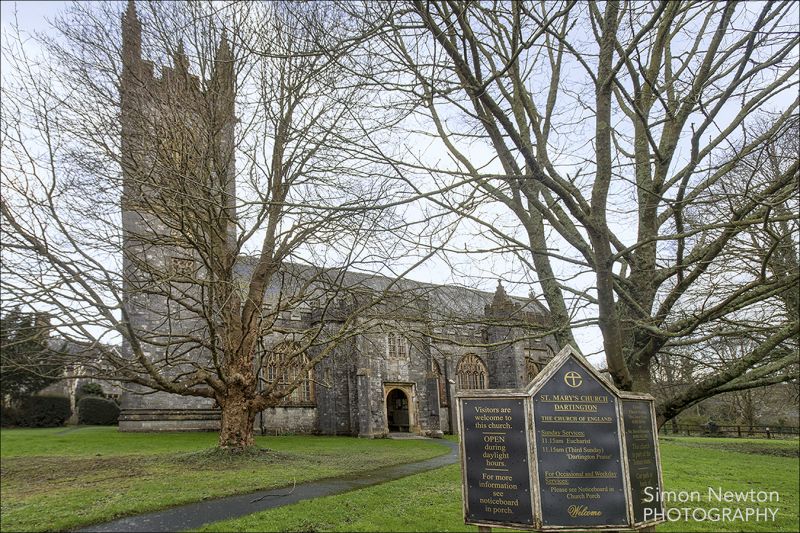 Parish church. 1878-80 by J L Pearson, reusing some material from the
medieval church. Snecked grey limestone ashlar with Bathstone dressings.
Slate roofs.
Plan: Nave, north and south aisles and chancel under one roof; west tower;
south porch with chamber over and vestry on the north side of the chancel
in the angle with the north aisle Perpendicular style. All of one build
1878-90 but incorporating some reused material from the medieval church
which was demolished in 1873 except for the tower (qv) which is situated
immediately to the west of Dartington Hall (qv). The reused material
includes the following:- the vaulting of the south porch, parts of the
porch doorway, the south doorway and door, the parapet copings, tracery in
the south corridor of the chancel and the window in the east end of the
south aisle; possibly also the doorways to the rood stairs; the reused
furnishings include the font and the rood screen which was much restored
when re-erected as was the pulpit.
Exterior: The north and south aisles have embattled parapets with reused
granite moulded coping, buttresses with set-offs and large 4-light
Perpendicular style 2-centred arch windows. The 3-light window at the east
end of the south aisle has reused late C14 decorated star tracery. Both
the north and south aisles have octagonal rood stair turrets with
battlements and short crocheted spires. The south aisle has a 2-storey
porch with diagonal buttresses and moulded doorway with quatrefoils and
mouchettes in the spandrels; the jambs and parts of the hoodmould are
reused material; 2-light lancet to the chamber above the porch. In the
angle on the west side of the porch a polygonal stair turret, to the
chamber above, with battlements which continue around the porch parapet.
the chancel has taller panelled parapets with crocheted pinnacles at the
east gable end rising from the set-back buttresses; the east gable apex has
a canopied niche with short pinnacles, and a cross above, containing the
figure of the Virgin Mary and Christ. At the corners of the chancel are
gargoyles. 5-light Perpendicular style traceried east window and 4-light
Perpendicular traceried north and south windows of the chancel; the south
window has reused C15 panel tracery. The low vestry on the north side of
the chancel has a flat roof and straight-headed traceried windows.
West Tower: in 2 storeys with diagonal buttresses, panelled frieze with
quatrefoils at the first stage level; large bell openings with reticulared
tracery quatrefoil louvres, pinnacled ogee arches, tall panelled embattled
parapet with large crocheted pinnacles and gargoyles at the corners and
pinnacles on each side; niche on side containing statue of Hems of
Exeter; 4-light Perpendicular style west window; polygonal stair turret on
the north side of tower with panelled battlements; the stair turret rises
only up to the belfry. The tower has a deep moulded plinth, its base
moulding is continued around the aisles, porch and the chancel, but at the
chancel it is only the base moulding again to a deeper plinth.
Interior: the south porch has C15 star vault from the medieval church,
with moulded tiercerons and ribs which spring from an gel corbels and have
carved bosses at the intersections. The south doorway has a reused moulded
arch and reused door with carved cover moulds and traces of colour.
Rendered internal walls. 5-bay north and south arcades with deeply moulded
tall 2-centred arches on piers with clustered shafts with moulded capitals
and bases. Tall tower arch with deep mouldings and respond shaft with keel
moulding. The nave roof continues over the chancel and has windbraces,
hammerbeams on stone corbels, the hammerbeam truss over the rood screen is
coupled to form a ceilure. The aisle roofs are lean-tos with arched
bracing on corbels. The piscina and sedilia are built into the low cill of
the south window of the chancel. The moulded doorways to the rood stairs
are probably reused from the medieval church. Fine C15 rood screen from
the medieval church much rebuild in 1913 by Hems of Exeter. The octagonal
carved wooden pulpit also re-erected from the old church. The seating is
entirely late C19 or early C20, with panelled bench ends; the choir stalls
have ends with carved leaves. The altar from the old church was installed
in 1838 by Archdeacon Froude and is made from timber from Dartington
Halls's hall roof. The wrought iron altar rails and reredos are 1909. The
font is probably C15 with octagonal Beerstone stem with panelled sides and
later plain octagonal granite bowl. The tower screen is circa 1911 to
1913 but incorporates C18 wooden balusters. The bells were cast in 1880
and the clock was erected in 1893. Stained glass east window by Clayton
and Bell.