A Grade I Listed Building in Aston, Birmingham 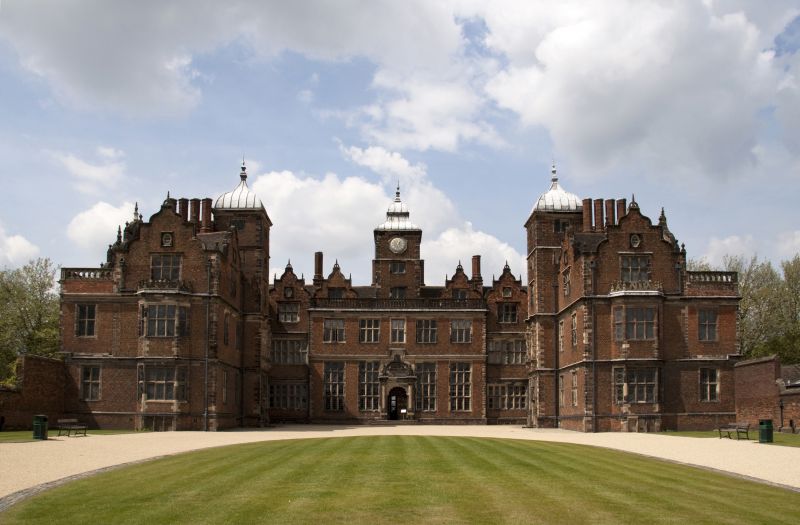 ASTON PARK
1. Aston PARK
5104 Aston B6
Aston Hall
[formerly listed as
Aston Hall (City of
Birmingham Museums)]
SP 08 NE 7/4 25.4.52
I
2.
1618-35 for Sir Thomas Holte. A major early Jacobean house on a grand scale
with a main block facing east, the forecourt enclosed by projecting flanking
wings each with a square turret breaking slightly from the inner face. Shaped
gables to front of wings and across symmetrical elevation of main block which
in surmounted by an axial tower rising in 3 stages from the balustraded parapet
to terminate in a 2 tier cupola: the dome on a square base over the original
lower tier. Surprisingly restrained ornament to the elevations of red brick
with darker brick diaper, the stone facings and quoins reserved for the corners.
Well proportioned mullion and transom windows, with 2 storey canted oriel
windows crested by strapwork to the ends of the wings. The central stone
doorway, giving immediately into the centre of the hall, has Doric columns,
entablature and cartouches above framed by strapwork and surmounted by ball
finials. An inscription bears the date 1618. Plans for the ground and first
floors survive in John Thorpe's book of drawings in the Soame Museum but there
are differences in execution, particularly the plan of the hall, a provision
for a polygonal end to the chapel on the south front and 3 bays on the west
the foundations of which survive. Alterations may well have taken place following
damage in the Civil War. Narrow wings abut the outer faces of the main forecourt
wings but were originally of one storey only at their east and west ends
heightened in the late C17. An arcaded loggia flanks the chapel projection
in the centre of the south front. The west range has a 2 storey main elevation
with a flat roof ro the Long Gallery on the first floor, the main block of
the hall rising on the third storey behind with 6 shaped gables and a chimney
stack with 6 grouped octagonal shafts. Archway to loggia at south end originally
one storey but as on east front heightened late C17, corresponding archway
added to north end in C18. The north elevation service/kitchen range with
considerable alterations to fenestration in the late C17 and C18 and with
early C19 service one storey additions. Very fine interior with wealth of
decorations in contrast to almost classical restraint of exterior. Much panelling
and architectural framework to doorways in great hall and to many of the monumental
chimney pieces in stone end alabaster. Richly carved strapwork balustrade
staircase in square well. One hundred and thirty six feet long, well preserved,
long gallery. Considerable amount of original decorative plasterwork to frieze
and ceilings but desceptively successful imitation Jacobean plasterwork carried
out for John Watt the younger, leasee of the Hall in the 1818 to 1848.