A Grade I Listed Building in Leighton, Cambridgeshire 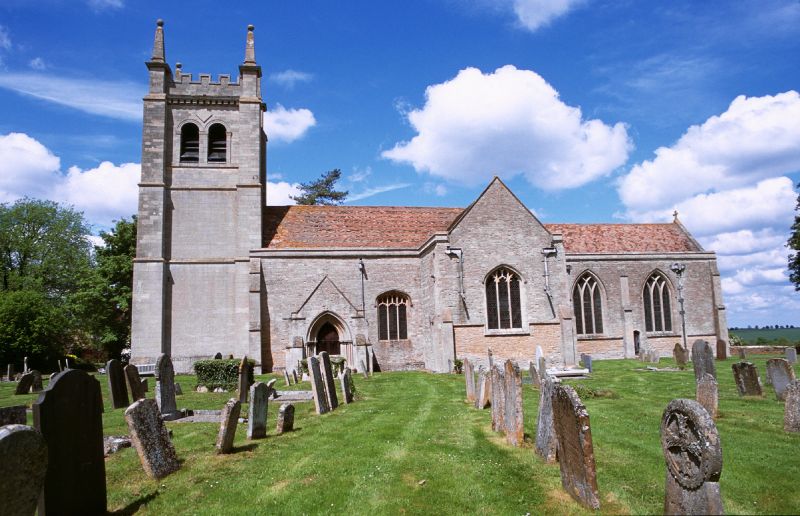 Parish church. Former C13 chancel and aisled nave rebuilt and enlarged in
C14 and north and south transepts added. Restoration in 1626 by
George Herbert included the rebuilding of the nave to a greater width,
demolishing the aisles but retaining the north and south doorways in the
porches. West tower built in 1634 by the Duke of Lennox. Further restoration
in 1870. Walls of coursed Weldon rubble with some field stones, ashlar facing
to tower and dressings of Ketton, Weldon and Barnack limestone. Tiled roofs.
South elevation: West tower of three stages with modillioned cornice and
embattled parapet between the buttresses rising to pinnacles with ball
finials. Paired, round arched belfry lights with plain pilasters (similar in
detail but larger than the west ground stage windows and the west doorway,
with key block and plain tablet above; the second stage window is square
headed); nave and transept with plain moulded parapet; reset C15 window of
three cinquefoiled lights with vertical tracery in a four-centred head; south
porch mid C13 outer doorway with two-centred arch of three moulded orders with
a moulded label'and dog-tooth ornament, the jambs have four shafts with
moulded capitals and bases; south transept with angle buttresses mainly C14,
and three cinquefoiled-light C15 window with vertical tracery in a
four-centred head; chancel two eastern windows early C14 each with
three-pointed lights and intersecting tracery in a two-centred head, the
western window is C15 with three-cinquefoiled lights with vertical tracery in
a four-centred head, below the window is a blocked C14 doorway and a blocked
'low-side' window, C16 doorway with chamfered jambs and four-centred head.
C17 rainwater heads on south wall of nave and transept, and two on south wall
of chancel (similar except in detail to north walls), one head elaborately
shaped with enriched cornice and dated 1632, with strapwork and ornament on
the flanges, and down pipe with enriched straps, and with acanthus ornament at
the junction. Interior: Tower arch, two-centred with classically moulded
orders springing from square responds'with moulded imposts. Chancel arch,
C13, two-centred of two chamfered orders, the inner order springing from
triple attached shafts with moulded caps, and modern corbels. Double piscenae
in chancel C13 reset with intersecting arcade, shafted jambs with moulded
capitals and bases, recessed shelves and two multifoiled drains. Bracket in
chancel C13, and in south transept with ball-flower ornaments; locker in
north wall of chancel C13, with trefoiled head, and in south transept C14,
with chamfered reveals. Font, formed from two C13 capitals with cover.
Noteworthy fittings include the screen, pulpits, seating and stalls c.1630-40
of oak with similar designs. Roofs; in chancel restored with five C17
trusses with moulded tie beams, moulded and panelled braces and moulded
wall-posts with shaped and moulded pendants; in nave six bays similar to
chancel with some repair; transept roofs also similar each of three bays. For
indents, monuments and floor slabs see RCHM. C17 floor tiles in north
transept. The church is noted for its C17 fittings, rainwater heads and
monuments; the C17 tower is an unusual Renaissance feature.