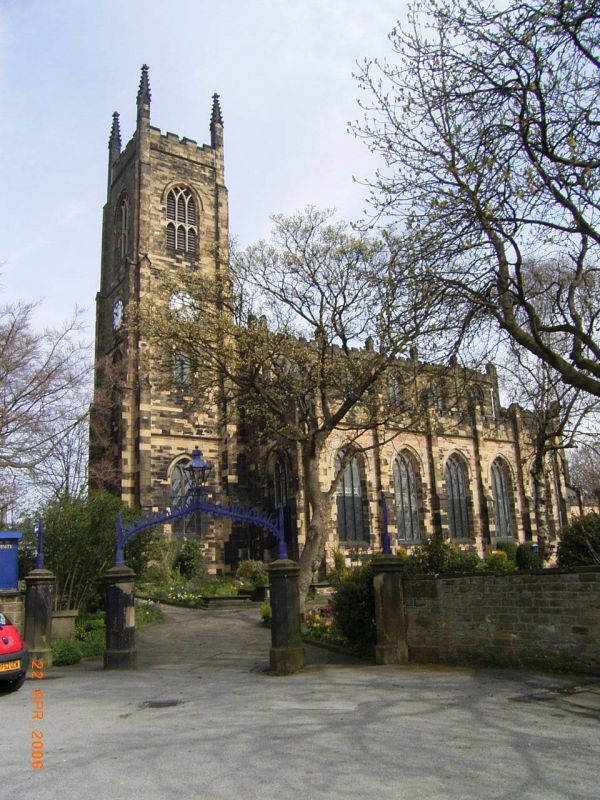 EXTERIOR: Tall church in the simple Gothic style of the early C19. The 4-stage tower has angle buttresses, and embattled parapet with corner pinnacles. It has a west doorway in a projecting surround, with Y-tracery windows, round clock faces in the 3rd stage and taller bell stage which has 3-light openings with intersecting tracery and arcaded transom. The 5-bay nave and aisles have an embattled parapets with pinnacles rising from the buttresses. Y-tracery clerestorey windows are above tall 3-light aisle windows with intersecting tracery. The chancel is also embattled, with buttresses carried up above the parapet under gable caps. The large 5-light east window has intersecting tracery and a transom. Below the east window are arched doorways to the crypt. In the north and south wall are 2 blind clerestorey chancel windows, above 2-bay vestry and organ chamber under lean-to roofs.

INTERIOR: The first 2 bays of the nave beneath the west gallery, and the first 2 bays of the aisles, have been divided off from the main body of the church. However, the original architectural elements all remain visible. Nave arcades have tall octagonal piers with chamfered arches. The chancel arch is tall and finely moulded, of which only an inner order on corbelled shafts has capitals. The tower arch also has an inner order on shafts. The nave has an arched-brace roof on corbelled wall shafts, and with cusped decoration in the spandrels, behind which the roof is plastered, with 3 purlins on each side. The 2-bay chancel roof is similar. Lean-to aisle roofs have cusped detail matching nave and chancel. Tall arches open to the organ recess from north aisle and chancel. Walls are plastered. The floor is concealed beneath modern carpet. The crypt, unusually for this period, is rib-vaulted on octagonal piers, and has walls of exposed stone, loculi for coffins.

PRINCIPAL FIXTURES: The font has an octagonal bowl and stem with blind arcading. Its cover is dated 1965. Other nave furnishings were removed in 1995, of which the openwork Gothic pulpit is in the crypt. The present west gallery has a frontal incorporating older panels. Elaborate choir stalls have ends with blind arches and tracery, and open-tracery frontals. They are probably early C20, as is the sanctuary panelling, including a reredos with 3 canopied niches. Among C19 memorials is a wall monument to Benjamin Allen (d 1829), by Bennett of York, in the form of a sarcophagus with a fulsome inscription to the founder of this church, set beneath a palm tree and dove; Allen family vaults are in the crypt. Stained-glass windows include a 1914-18 war-memorial window by Hardman of Birmingham.

HISTORY: Parish church of 1816-19 by Thomas Taylor (1778-1826), architect of Leeds who had worked under James Wyatt but by the 1820s was in private practice with many commissions for new churches. Holy Trinity was built to serve the growing population of Huddersfield in the early C19, in particular the middle-class villas and terraces of Mountjoy Road; Benjamin Allen was a leading promoter. Originally the interior had galleries on 3 sides of nave and aisles, which accounts for the tall proportions of the building. There was a major re-ordering of the interior in 1995 when most of the nave furnishings were removed, and service rooms were partitioned off from the main body of the church; this work was designed by Peter Wright and Martin Phelps.

REASONS FOR DESIGNATION: The church of the Holy Trinity, Trinity Street, Huddersfield, is designated at Grade II* for the following principal reasons:
* It is a large early C19 town church with a prominent, well-designed tower.
* It is one of a group of churches built in Huddersfield in the simple Gothic style to serve the growing urban population in the early C19.
* Although many of the fittings have been removed, the chancel retains early C20 fittings of consistent quality.
* It is a good example of Thomas Taylor's late Georgian church design.
* The crypt is unusually elaborate for a late Georgian church.