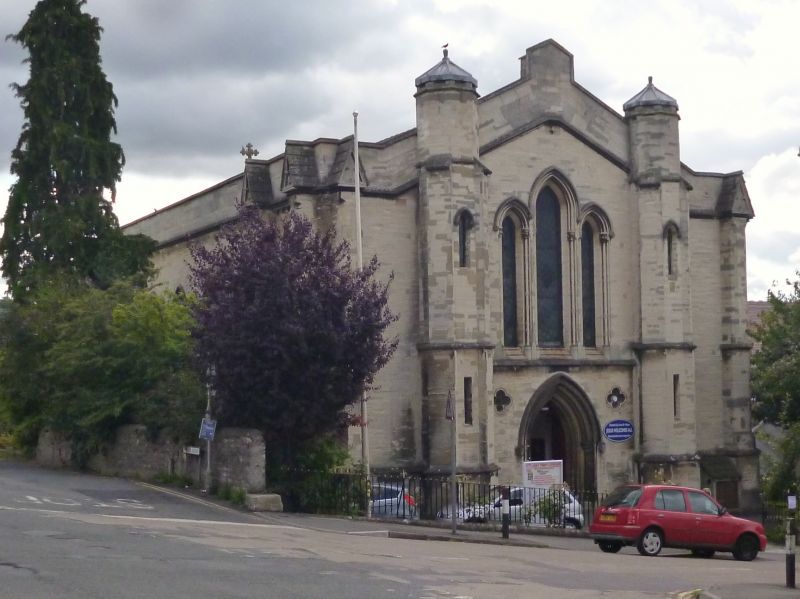 EXTERIOR: Foster deployed the `lancet style' for Holy Trinity, a simplified, sometimes bare, version of Early English Gothic. The west front is broad and quite successful. There is a central stepped triple lancet window with slim shafts, above a two-centred entrance arch flanked by little quatrefoils. The west gable is shallow, and extends behind and beyond the paired octagonal turrets framing the entrance. They formerly had very tall spirelets on pierced arcades, replaced by blunt lead cappings. The outer angles of the front are turned by substantial coped gables. The sides of the nave have six tall uncusped lancets, and at the west end, a higher lancet in a narrower bay lighting the staircase lobbies. This bay is separated visually from the nave by two coped buttresses. The five-sided sanctuary apse has a coped buttress at each corner, and windows like those in the nave. Low vestry to the north, added later in the 19th century (originally a screen behind the altar formed a robing room in the sanctuary).

INTERIOR: The interior is dominated by the chancel opening, framed by 'three elegant graduated pointed arches with foliage capitals' (Verey and Brooks). They are all of cast-iron, enabling very slim piers. The west gallery is likewise on cast-iron supports, with simpler moulded capitals. The gallery front has repeated blind arcades of cusped lancet form, a very attractive effect. The end bays of the gallery break forward slightly; originally there were side galleries ending east of the third nave windows. The wall between vestibule and nave has three big blind arches over the gallery (originally open), and arches below for the entrance etc. Flanking it, two smaller openings, now blocked, originally containing semi-private seating for 'sponsors'. Nave roof trusses probably of the 1830s, with pierced arcading and wrought-iron reinforcing straps. The sanctuary is shallow, as was usual in the early 19th century, and has a plaster vault with slim ribs. The heads of the windows break into the vault. The gallery is served by stone staircases in lobbies at the outer angles of the west end.

PRINCIPAL FIXTURES: Many fixtures are rather standard ones installed in the alterations of 1882-3. The sanctuary is floored partly with encaustic tiles, probably of 1883. The nave has pine bench pews of the same date, with rounded terminations to the bench-ends. In front of the sanctuary step are matching choir stalls, with more chamfering and a little Gothic decoration to the fronts. There are two pulpits: one is high up to the right of the chancel arch, and reached by steps through the wall. It has cusped Perp panels and a moulded base, resting on a freestanding pillar. It is painted and gilded. The second pulpit is simple, of panelled oak, given in 1935. The original seating in the west gallery survives: at the back, raked rows of open benches with shaped ends, and one row of rented box-type pews at the front of the gallery. A large, plain oak-cased organ of the late 19th century occupies the north-east corner of the nave. Stained glass in the apse only: the east and south-east windows by Powell & Sons, 1857-9; the north-east c. 1869, probably by Clayton & Bell; and the north, by Willement, 1839.

HISTORY: The church of Holy Trinity at the eastern end of Stroud was consecrated in 1839 as a chapel-of-ease to the parish church of St Laurence. The cost was borne by subscription and a grant from the Church Building Society. In 1879 it was given an ecclesiastical district, which included the eastern part of the town, Thrupp, Bourne, and Nether Lypiatt; the living was then made a vicarage.

Thomas Foster (1793-1849) was a member of a prominent family of Bristol architects, beginning about 1800 with his father James. Thomas Foster was in partnership with William Okely until 1840, producing competent but sometimes bare Neo-Gothic churches. They entered the competition for rebuilding the Palace Westminster in 1835. Known as Foster & Wood after 1849, they were successful and prolific designers of Bristol¿s Victorian public buildings, as well as undertaking much church restoration in the city and its hinterland. The exterior of Holy Trinity is very like Thomas Foster's Grenville Methodist chapel (1837-8), Oldfield Place, Hotwells, Bristol (unlisted, now flats).

REASONS FOR DESIGNATION: The church of Holy Trinity, Stroud, is designated at Grade II for the following principal reasons:

* It forms a focal point for the district and a key element in its historic development.
* The shallow apsidal sanctuary with its excellent cast-iron triple chancel arch from the 1830s building are an uncommon survival, since such features were usually swept away in later 19th century refittings. The gallery, a more common survival, is both attractive and adds to the versatility of the space for modern-day uses.
* It is one of relatively few surviving complete churches of this date by the firm of Foster & Okely.