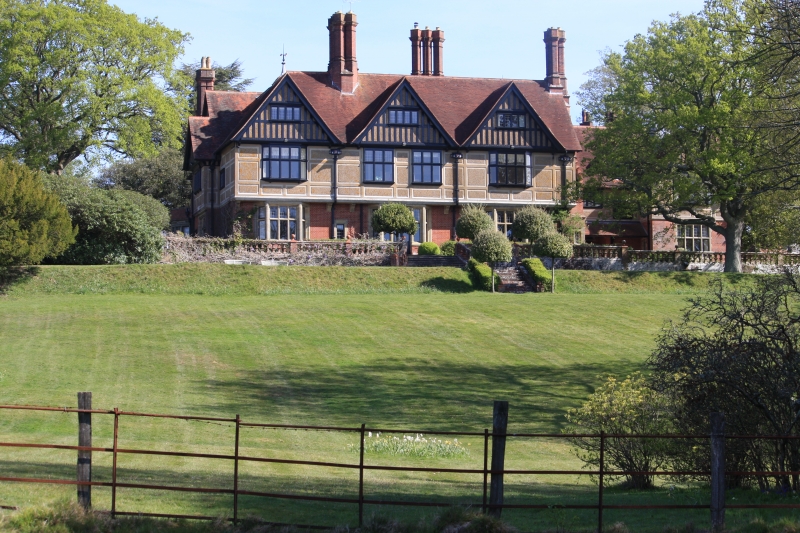 2
Country House. Dated 1892 on crown of arch over entrance porch doorway. Frederick
C Lees for Major General Sir Wykham Lee Pemberton in an eclectic English C16 and
C17 style. Red brick with dressed stone details, parging in rectangular panels to
upper storey; jettied, close stud timber framed gables, plain tiled roof. Two
storeys and attic: main block is a double pile with cross gables and dormers; to
the east a further cross range with a single storey service wing at the north end.
Seven brick chimney stacks with tall shafts, some diagonally with linking cornices.
On the ridge of the east cross range the leaded base of the former bellcote.
Entrance front of the main block, approached through a walled forecourt, has three
short projecting wings (E plan) alternating with two gabled dormers on the main
roof. The jettied gables to the wings and the eaves are supported on close set
timber brackets. A single storey stone entrance porch across the width of the
central wing has a wide basket arched doorway set in a moulded rectangular
frame with fleurons. Panelled timber double doors. To either side a single
light window with transom flanked by pilasters on pedestals, carved foliage capitals.
Crowning entablature to porch with pulvinated frieze and brick parapet above broken
in the centre by a carved stone escutcheon in an arched frame. In the gable end
above the porch, a 5-light stone mullioned casement and a 4-light timber framed
casement to the attic storey below the framed gable. To the right of the central
wing a large stone mullioned and transomed window (4x4 lights) to the hall. A
gabled, timber framed and glazed conservatory on a brick base projects from the
right hand wing. A 4-light stone mullioned casement to first floor of wing and a
4-light timber framed casement in the gable above. Similar stone mullioned
windows on both floors to left of central wing. Timber frame 2 and 3-light casements
to first floor of left hand wing and gable end of east range; central stack on
east range gable end wall. The West front has a cross gabled central feature:
central arched stone framed doorway with fanlight flanked by stone framed sidelights
with transoms. In projecting parged first floor wall above doorway a 4-light timber
framed casement and similar 3-light casement in parged end wall to right. To
left, above the gable, a tall framed gabled dormer with casement flanked by a tall
brick stack with weathered offsets. Further left, a large single storey semi-
circular bay window: stone framed of 7-lights with single transom and stone moulded
cornice with brick parapet over. The south (garden) front of the main block has 3
gabled bays with parged first floor jettied out on shaped brackets. On the ground
floor a canted stone framed bay window to each bay: at each end, 3 lights to front
and single side lights with upper transoms, the central window is similar but
contains a stone arched doorway with fanlight . On the first floor, a timber frame
canted oriel window to each end bay with 3 lights to front and single side lights
and two 3-light casements in the central bay, all with single upper transoms. A
4-light timber framed casement in each framed gable. To the right of the main
south front an entry porch with lean to roof. Parged first floor and a gabled roof
dormer above. Further right the gabled end of the lower east range with a 4-light
stone framed ground floor casement and an oriel matching those to left on the first
floor. Similar windows in the cross gable on the east side of the east range.
Generally rectangular leaded panes in the upper lights of all windows. On the south
side of the house a broad terrace with open balustrade: shaped balusters in bays
between piers capped by ball finials, flights of stone steps to garden at either
end of terrace and in centre with curved steps and balustrades.

Interior: stairwell entered from porch through panelled double doors with upper lights
glazed with leaded bottle glass with panels of similar glazing above. The hall to
rigth rises through two storeys. It is entered through a three bay screen arcade
with galleries above and on the inner or south side both reached from the open well
staircase. A cantilivered quadrant over the south east corner of the hall links
both galleries. Panelled newels and gallery piers, balustrades with turned balusters.
Cross beamed ceiling to hall with turned pendant drops. Hall fireplace on the south
side has an overmantel of C17 Breton carved oak panels (sliding doors from a litclos)
decorated with wheel motifs. Other principal rooms have original joinery. Drawing
room and morning room have Adam style fireplaces. The house is a very well
preserved example of a late C19 country house designed in a romantic idiom
influenced by the Arts and Crafts Movement. Drawings were exhibited at the Royal
Academy in 1895 and published in The Builder 13 April 1895.