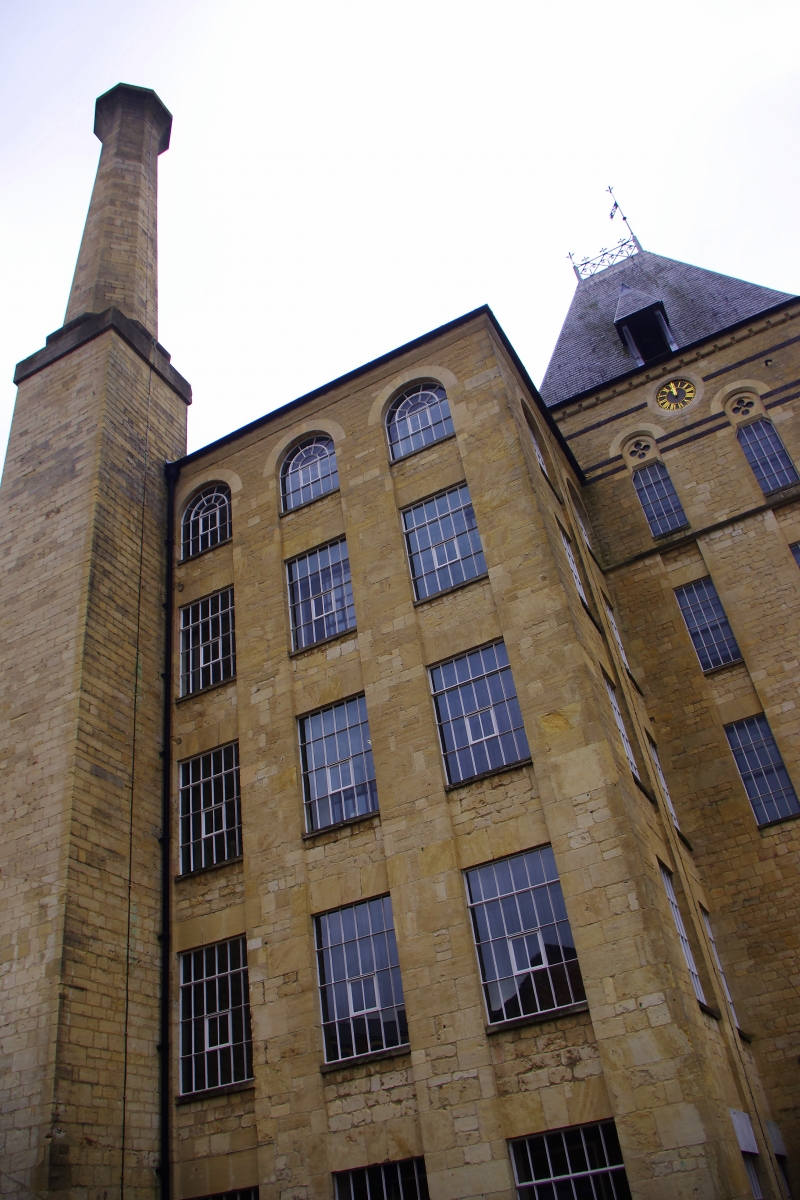 Woollen mill, now council offices. 1818 for Stanley and Stephen Clissold, extended to north and clock tower added by G F Bodley for S S Marling in 1862; restored for Stroud District Council 1987-90. Squared limestone; Welsh slate roofs, hipped to 1862 block and gabled to 1818 block; stone lateral and end stacks to 1818 range; projecting from west elevation of 1862 range is large stack with moulded base to tapered octagonal shaft with moulded capping. L-plan with long 1818 block to south of 1862 block which has boiler house to west. 1818 block of 4 storeys and 18 x 3 bays: segmental-arched doorways and 2-light segmental-arched windows each with central mullion; continuous roof dormers with canted roofs, much restored. 1862 block of 5 storeys and 6 x 6 bays: articulated by shallow pilasters which frame flat-arched windows and semi-circular arched top-floor windows; all windows of cast-iron with small panes. Projecting stair/clock tower in south west angle between blocks has steeply pitched French Gothic roof with iron cresting and weathervane. Low one-storey boiler house projects to north-east.
Interior: includes timber floors supported by timber girding beams with inserted cast-iron columns for additional support; brick arches to ground floor mark sites of original culverts to water wheels. 1862 range has stone stair and lift shaft to south west angle. The site was bought by the Clissolds in 1799: the traditonal internal timber construction of the mill contrasts with the advanced construction of nearby Stanley Mill (q;v) which was built in brick around a cast iron frame. The 1818 block was powered by 5 water wheels; steam power was installed by 1862 for SS Marling who acquired the mill with his brother in 1840. Bodley designed nearby Selsley Church for Marling, its French Gothic style matching the tower at the mill.
Including Greenaway Buildings to west of Ebley Mills: The detached western buildings of Eblley Mill, which together with the mill comprise the rare and important survival of a functionally-integrated early C19 woollen mill complex. The western group consists of two multi-storeyed buildings attached to the east and west sides of the remains of a single-storeyed shed. All in Cotswold limestone, with two and three-light mullioned windows. Early to mid C19. The east building, on a north-south axis, is of two storeys and ten bays, probably dating in part from circa 1825 or earlier. Three light windows and gabled slate roof. A wagon entrance in the east elevation and a former taking-in door in the south end suggest the main function was warehousing. A later two-storey tranverse building in brick, now forming the west side of the site entrance, replaced the original north end. The larger five-storeyed west building is of ten bays, with three-light windows and a gabled slate roof. Probably added in the mid C19, replacing a smaller building in the same position. Its large size, fenestration and absence of taking-in doors suggests it originally accommodated manufacturing processes. A two-storeyed wing of six bays projects westwards from the north end and may have formerly contained steam plant. The shed between the buildings has mostly been replaced by a wide-span late C20 roof, although the original scale and construction of the shed are indicated by the surviving north end wall and south end bay.
Interior: east and west buildings of joisted floors supported by timber props with timber king-post roof trusses. No clear evidence of steam power is visible, but the shed is likely to have been used for powerloom weaving. The surviving south end bay of the shed is of pegged timber construction suggesting an early C19 date. It is probably an unusual survival of the first stage in the development of the weaving shed. The group as a whole is similar to the juxtapostion of late C19 weaving sheds with multi-storeyed ancillary buildings seen in the textile industries of other regions.
SOURCE: English Heritage survey report; West Block Ebley Mills; 1997.