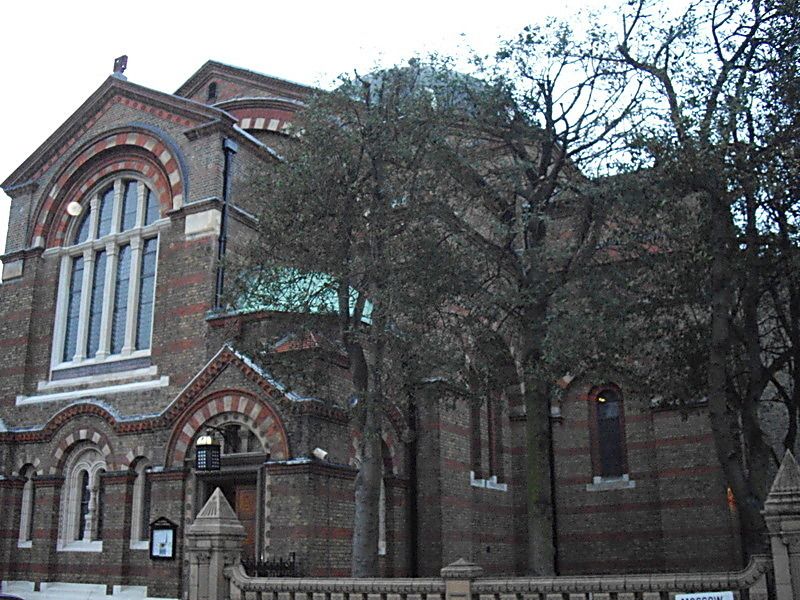 GV I
Greek Orthodox Cathedral, 1878-9, by John Oldrid Scott. The builders were Kirk and Randall of Woolwich.

PLAN: The church has a Greek cross plan, with four projecting arms forming a nave, transepts and sanctuary, the latter facing facing north; to the south is a narthex with gallery above, to the east a vestry. A crypt runs beneath the eastern portion of the building.

MATERIALS: Yellow brick with red brick banding and dressings in stone and red brick. There is a central copper-clad dome with twelve round-arched lights, and pan-tiled, pitched roofs to the nave, transepts and sanctuary; smaller copper semi-domes flank the nave and crown the northern apses. Originally the principal dome was covered with lead, but it was reclad in copper in 1901; it is surmounted by a gilded cross.

EXTERIOR: The church is Byzantine in inspiration. The principal front faces south and is dominated by the nave's gable end, which contains a large semicircular relieving arch with alternating stone and brick voussoirs; within this is a round-arched, recessed window of four lights with terracotta column mullions and banded heads. Pilasters rise from impost level to support a broken pediment formed by the gable end with enriched eaves and cross finial. The window's sill contains a granite panel bearing an inscription in Greek which reads (in translation): 'The Greek Colony in this seagirt island built this Church far from their dear country, dedicating it to the Holy Wisdom of God, during the reign of the great and illustrious Queen Victoria. London 1878'. At ground level the two principal entrances flank three central, recessed, round-arched windows set in moulded terra cotta surrounds and linked by red brick and stone banded heads and a decorative cornice. A bulging half-column forms the mullion of the central two-light window and there is further decoration in the tympana above.

The east and west facades also have large semi-circular relieving arches with alternating stone and brick voussoirs under the gable end pediments, these framing large stone wheel windows. Other windows are round-arched, in singles or pairs, some with brick surrounds and others in carved stone. The same motifs feature in the plainer north elevation, which is built so close to the adjoining building as to have little public aspect.

SUBSIDARY FEATURES: The site is bounded by a terracotta boundary balustrade with rectangular piers and inset fluted Ionic half-columns and pyramidal caps, some modern replicas of the originals which were in part lost in the Blitz. The railings date to the 1990s and have been designed with reference to historic photos showing the originals. The balustrade is separately listed.

INTERIOR: Notable for both its spatial qualities and rich decoration and fittings. The rectangular narthex leads up five steps to the main prayer hall, dominated by the large central dome. The barrel-vaulted south, east and west transepts are of equal length and to the north is the Sanctuary, divided from the nave by the iconostasis screen. The Sanctuary is tripartite with three apses surmounted by semi-domes, the central one housing the altar and therefore taller and wider. There is a vestry to the north-east and gallery in the south transept.

The narthex was originally stone paved with exposed polychrome brickwork, but in 1994 was lined in marble. It retains its original stencilled ceiling. It contains a series of mosaics, some of 1994 and others more recent in date by mosaic artists Sotiris Varvogli and Fanis Mavridis. Relocated in the narthex is the C17 inscription which originally stood above the door of the church in Greek Street and records the patronage of the church by Charles II and the Bishop of London.

In the main church, the walls are lined in rich coloured marbles in green, black, white and pink (added in 1881-5) and, where exposed, there is polychrome brickwork. The floor is tessellated paving in geometric patterns with a double-headed eagle design at its centre, the traditional emblem of Byzantium; it dates to 1889. The windows are all acid-etched glass in a variety of floral designs.

The dome, resting on pendentives, is decorated by multi-coloured glass enamel mosaic designed by sculptor and painter AG Walker, executed by GN Mecenero and undertaken in 1891-93. Against a background of gold is a figure of Christ, arms outstretched in benediction, seated on a rainbow with His feet against a spherical body representing the earth. He is encircled by twelve cherubim in a scalloped border beneath which, in between the twelve round-headed lights, are the figures of the apostles and evangelists. There is a band of Greek text at the base of the dome. The pendentives, also with a gold background, contain four-winged seraphim and are inspired by the same features at Hagia Sophia, Constantinople. The gilded Bath stone Composite capitals to the dome piers also reference the mother-church of Eastern Orthodoxy. The Sanctuary arch is decorated by further mosaics by Walker, depicting Moses and Aaron. The four arches which support the dome originally had alternating brick and stone voussoirs but in 1926 these were covered with the second major mosaic scheme in the cathedral, that by Russian artist Boris Anrep. In contrast to Walker, who uses foreshortening and shadow to make his figures appear lifelike, Anrep adopted the flat perspective and simple detail of Byzantine mosaic art. His biblical figures, saints and angels adorn the transept arch soffits and the Sanctuary apse ceilings.

FIXTURES & FITTINGS: Dividing the Sanctuary from the crossing is a richly-carved three-tiered iconostasis, designed by John Oldrid Scott and made by Farmer and Brindley. It is crafted of panels of walnut inlayed with rare woods and mother of pearl. The lower tier contains three doors to the Sanctuary, each featuring paintings by German artist and philhellene Ludwig Thiersch. These are interspersed with further paintings by Thiersch and with wrought iron brackets designed to hold lamps. The paintings depict the principal figures of Christian worship including the Archangel Michael, St George and St John the Baptist. There are twelve icons/paintings depicting scenes from the life of Christ, also by Thiersch, on the middle storey and the final section comprises a painted Crucifixion flanked by icons of Mary, Mother of Jesus and Saint John.

Other notable fixtures and fittings include: walnut choir gallery also by Farmer and Brindley to Scott's design; fine carved oak and brass misericord seating dating to c1850 and brought from the Church of Our Saviour, London Wall; Bishop's seat complete with baldachin and other clergy seats; hanging silver-plated double Greek cross with ruby lamps; large sections of a C16 iconostasis in the east transept with roundels containing figures of saints and vines; intricately-carved mahogany pulpit on alabaster and marble columns with wood inlay sounding board; marble altar; brass candelabra and candlesticks; fixtures and fittings behind the iconostasis, including vestment cupboards; cast-iron radiator covers and umbrella stands; a painting of Christ Blessing the Children dating to c1881; various memorial panels, including three which commemorate soldiers of the First World War.

CRYPT: Located beneath the eastern section of the church, has a jack-arched brick ceiling supported on iron columns. The crypt stair and a second flight of steps leading into the main room are original and there is also a fireplace. The area under the Sanctuary has been converted into a small museum, exhibiting vestments, books and silverware from the Cathedral's collection and the re-sited foundation stone. The design of the museum is by Panos Arvanitakis and was completed in 2006.

PRESBYTERY: There is a presbytery of 1921 to the west of the church, the interior of which was not inspected. It is included in the listing.

The impetus for constructing a new church was that the majority of the Greek community who worshipped at the Church of Our Saviour, London Wall lived further afield, many in the smart, new west London suburbs of Paddington, Bayswater and Notting Hill. Thus, a building committee headed by Emmanuel Mavrogordato, decided to build a new and more conveniently-located place of worship. This was to be 'a beautiful Church, outstanding in style and execution, a monument worthy of the great names of the Greeks settled in London and of the Greek Orthodox Church'. Also involved was the church's solicitor, Edwin Freshfield, a renowned Byzantinist of the time, who was consulted on aspects of the building's design. The foundation stone was laid in 1878 by Eustratius Ralli. In a speech, Mavrogordato explained that the committee had inclined to call the church 'Divine Wisdom' because 'it possesses a natural significance from its historical association with our national fortunes and is a symbol of our national aspirations and hopes'. The first service was held on Whitsuntide Sunday, 1 June 1879 and the church was consecrated by the Archbishop of Corfu on 5 February 1882, on completion of the majority of the interior decoration.

Scott's initial proposals for St Sophia were exhibited in the Royal Academy in 1876. The plans show a stone building with brick and terracotta details, domes carried on marble columns above the transepts and sanctuary, and a baptistery. The design was subsequently simplified for reasons of economy.

In 1922, Saint Sophia was designated by the Oecumenical Patriarchate of Constantinople as the seat of the newly-created Diocese of Thyateira, named after the See of Thyateira in Asia Minor, with jurisdiction over Central and Western Europe. It thus became a Greek Orthodox Cathedral and the seat of the bishop of Thyateira.

REASONS FOR DESIGNATION: The Greek Orthodox Cathedral of Saint Sophia, designed by John Oldrid Scott and built in 1878-9, is listed at Grade I for the following principal reasons:
* architectural: an early and important instance of the neo-Byzantine style in England;
* authorship: the masterpiece of JO Scott, a prominent Victorian church architect;
* interior interest: outstanding spatial and decorative qualities of the interior, inspired by the mother-church of Orthodoxy, Hagia Sophia, and featuring lavish use of marble, mosaic and terrazzo;
* artistic interest: two contrasting but equally important mosaic schemes, by AG Walker and Boris Anrep, both significant artists of their respective periods;
* fixtures and fittings: many purpose-designed for the church, and all of the highest order of craftsmanship;
* historic: a unique manifestation of C19 expatriate Greek national identity and spirituality;
* group value: with the Anglican church of Saint Matthew (Grade II*) and the New West End Synagogue (Grade I).