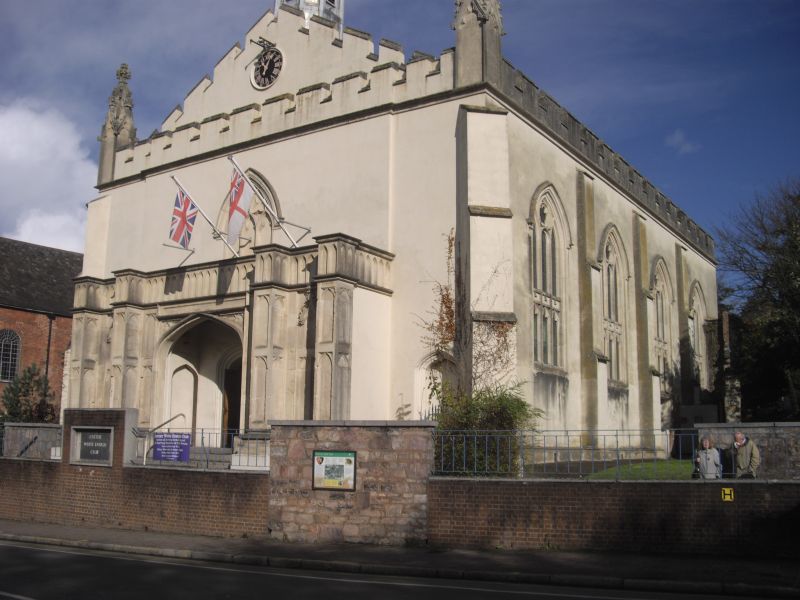 (Formerly listed as: SOUTH STREET CHURCH OF THE HOLY TRINITY)

MATERIALS: the church is constructed of stuccoed brick with stone dressings, and a lead covered belfry. The roof is concealed behind a parapet.

EXTERIOR: a rectangular preaching box with a screen-like west front; single arched window (blocked) over the arcaded parapet of the screen; battlemented parapet between heavy crocketed corner pinnacles; battlemented gable end with clock; belfry in the form of an octagonal lantern. Side elevations have four arched windows per side, set between buttresses; windows comprise three-light tracery in two orders, rising up to a sexfoil. Very plain east end. There are a number of small, C20 single-storey service extensions to the rear.

INTERIOR: The interior has been extensively subdivided with modern partition walls to accommodate the social club. A modern suspended floor occupies the area of the original choir gallery at the west end accessed by a modern staircase. A suspended ceiling has been inserted over the remainder of the chancel and nave. The arcade is of four bays. The lower parts and high bases of the slender quatrefoil piers and the east and west responds of the aisles are visible, whilst the upper parts of the nave and chancel, including the four centred arches and elegant fluted capitals of the arcade, survive above the inserted ceiling. No ecclesiastical fittings survive, apart from some windows. It is by and large plain glass with detailed decorative leading and strong coloured margin glazing. In the interior the window transoms are banded with blind moulding decoration. In the north aisle there is a later-C19 stained glass window depicting the nativity.

HISTORY: Holy Trinity Church is medieval in origin, and stands on the main medieval thoroughfare from London and the east to Exeter, just inside the South Gate on the city wall. Both the gate and the church were demolished in 1819, when Holy Trinity was completely rebuilt by the Exeter firm of Cornish and Sons, at a cost of over £7000; the church accommodated around 1000. Robert Cornish (c1760-1844) was a long-serving surveyor to Exeter Cathedral in 1800-1838, and his son Robert Stribling Cornish (1788-1871) rose to become Mayor of Exeter in 1852-53. Papers relating to Holy Trinity dated 1819 held by the Incorporated Church Building Society refer to them as 'Architects and builders'. The Cornishes also designed St Edmund's church, Exeter in 1834. The chancel of Holy Trinity was subsequently altered in 1884 by Edward Ashworth, when the pews were replaced and other fittings installed. South Gate suffered badly during the Blitz of the Second World War, but the church and much of its stained glass survived. Having fallen into disrepair, it was subsequently converted in 1977 into an armed forces social club. This involved the lateral sub-division of the nave.

* Historic interest: as a late Georgian rebuilding of a medieval parish church, demolished during civic improvements, located just inside the city's South Gate

* Architectural interest: as a picturesque (if late) example of Georgian Gothick design, designed and executed by the local family practice of the Cornishes

* Group Value: for its contribution to the streetscape, alongside the site of Exeter's South Gate and the Scheduled city wall, and its relationship with other listed buildings.