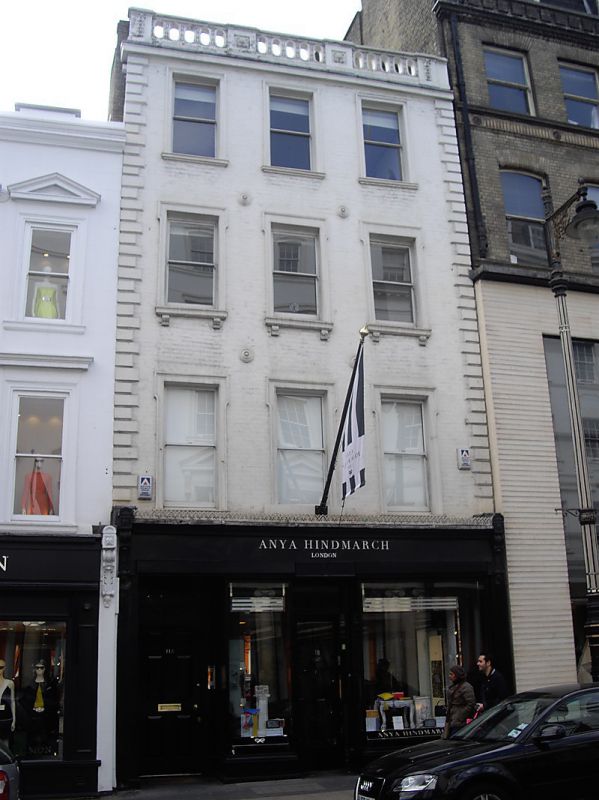 House, mid-C18, now shop with offices above, and Victorian extension to the rear. Home of Horatio, Viscount Nelson, in 1798.

EXTERIOR: Three window bays and four storeys. The brick façade has been stuccoed and all the original sash windows replaced. The ground floor has fluted Ionic half-columns, supporting an entablature which serves as a fascia to the C20 shop front. The upper storeys have moulded string courses and two raised panels between the floors, one of which bears the painted words 'Nelson House', the other of which contains a blue plaque. The first-floor windows have lugged surrounds but the others are simply recessed. The façade is the narrowest part of the building, which is trapezium-shaped and widens to the rear. The rear elevation, on the east side of Haunch of Venison Yard, appears to be mid-C19 and has metal lintels creating large openings, presumably former loading bays, on the ground and first floors; the fenestration has been altered since. The upper floor windows are smaller and have stone lintels and sills. This elevation is of lesser interest. No. 7 Haunch of Venison Yard was part of 103 Bond Street from the 1950s until recently but is now a distinct property accessed via 101 New Bond Street, a narrow commercial building of 1906 by A M Ridge. Neither of these buildings is included in the listing of 103 New Bond Street.

INTERIOR: Much-altered, but fragments of C18 fabric survive alongside Victirian features. The stair is C18 in its upper flights and Victorian lower down. There are also some original architraves and fragments of cornice, some, again, Victorian. A large Venetian-arched opening leads to a corridor which connects the former house at 103 New Bond Street to its mid-C19 extension, which overlooks Haunch of Venison Yard. The Victorian extension comprises three floors of open- plan space with timber floors connected by a grand terrazzo staircase with decorative iron balustrade. The top floor is lit by a large rectangular lantern.

Horatio, Viscount Nelson (1758-1805) lived at 103 New Bond Street in 1798, taking up residence in early February and departing on 16 March after receiving orders to proceed to Portsmouth, from where he sailed to rejoin the British fleet near Cadiz. The building is the only one of Nelson's residences to remain recognisable as an C18 house. His occupancy is commemorated in a blue plaque on the building, erected by the London County Council in 1958.

REASONS FOR DESIGNATION DECISION: 103 New Bond Street is listed at Grade II for the following principal reasons:
* special historic interest as the best-surviving home of one of the most significant figures in British history: Horatio, Viscount Nelson
* its proportions, rough plan-form above ground floor inside, pilasters to the shop, and stuccoed façade all contribute to its special character as one of the few houses on New Bond Street dating to early phases in the development of this important street;
* there is sufficient historic fabric for the building to be readable as a Georgian townhouse and to convey a sense of its appearance in Nelson's time.