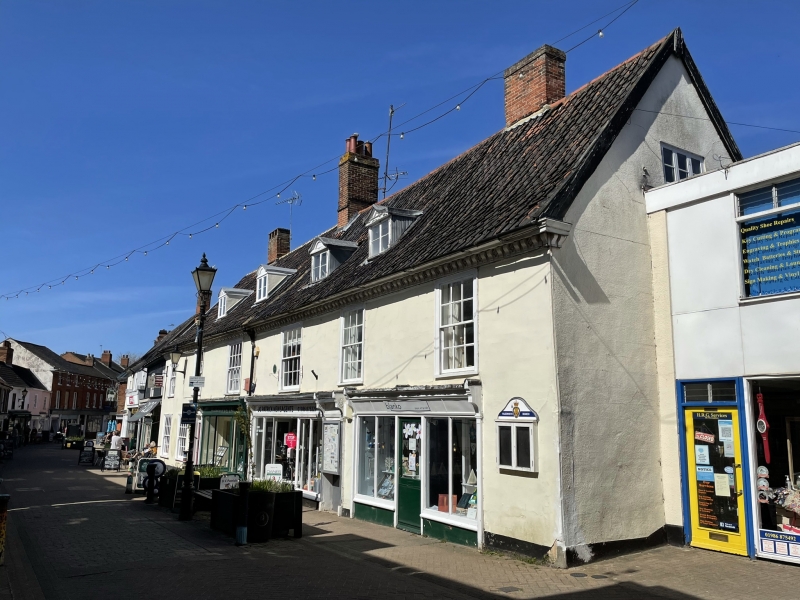 15 and 16 Thoroughfare
Grade II
21-OCT-1949
Guildhall built in 1474 for the Guild of St John the Baptist and the Guild of St Loye and St Anthony, altered in the C17, C18, C19 and C20, with shops at the ground floor and living accommodation at first and attic floors.

MATERIALS
Timber-framed, mostly encased in brick and plastered with a pantile covering to the roof.

PLAN
Rectangular of nine bays with extensions to the rear and south-east.

EXTERIOR
The building has a gable roof and four dormers each with shaped pediments. There are three ridge stacks. The façade has four, late C19 shop fronts, the three to the right with pilasters and fascias with dentil cornices supported on brackets, that to the left with glazing bars and flush frames. At first floor there are three eight-over-eight sash windows with horns and three early C19 sash windows with flush frames. Above is a modillion cornice with quatrefoils between each pair of modillions. Setback to the right (south-east) is a late C20 two storey flat-roofed addition. The building has been extended to the rear, including an off-centre, two-storey addition with a hipped roof, a variety of window openings and C20 fenestration. Timber studwork is exposed on the rear elevation of the four northern bays.

INTERIOR
The ground floor shop units retain few fixtures and fittings of historic interest. Haunched soffit tenons probably of early C16 date are apparent in the floor frames. At first floor level the principal timber posts of the former hall have moulded, arched bracing rising through the later ceiling to the attic level. Some of the front wall posts have empty mortices suggesting a secondary bracing which has been removed. No studwork is apparent on the front and right-hand rear wall frames, suggesting that most of it has been removed during the re-facing of the building. At attic level, reached by a C19 winder stair, the purlins have roll mouldings of differing profiles, and arched bracing supporting collars. Substantial tie-beams remain, but the roof structure above the collars is not visible or accessible. The floor boards in the attic are wide and the brickwork of the southernmost stack is thin and handmade, features consistent with a C17 date. Late C18 or early C19 refurbishment is attested by some two panel doors at first and attic levels and a reeded door-case in one room of the first floor. Considerable C20 remodelling has occurred at ground and first floor levels including the insertion of walls, corridors and stairs.

HISTORY
The Guildhall was built in 1474 for the Guild of St John the Baptist and the Guild of St Loye and St Anthony. The Guilds were instrumental in teaching crafts to apprentices, and it is understood that apprentices were accommodated in the Guildhall itself. Following the dissolution, the Guildhall was acquired by the Crown, but after 1550 the building was held by Robert Norton and the rents used for supporting the poor of the town. In 1585, Queen Elizabeth I granted a petition from the townspeople for the possession and free use of the building.

The building may have originally comprised two open halls at first floor, of four bays each, with a central entrance bay. It is possible that the ground floor was sub-divided into smaller units, but this is not certain. At an unknown later date, the halls were co-joined. The open hall was floored over at attic level probably in the C17, when the right-hand stack was also inserted; the building may have been encased at this time. Further remodelling took place in the late C18, and extensive alterations occurred in the C19 when the ground floor was converted into shops. Numerous C20 extensions have been added to the south and rear, where the window openings and fenestration have also been altered. The interior at the ground and first floor levels has been extensively remodelled in the C20.

REASONS FOR DESIGNATION
The Guildhall, 15-16 Thoroughfare, is designated at Grade II for the following principal reasons:
* Architectural Interest: The building retains a late C15 timber frame at first floor and attic level with moulded purlins, arched bracing and wall posts. Evidence of the C17 flooring of the hall and C18 gentrification of the structure adds interest.
* Historic interest: The building has historic interest as a former Guildhall, a rare and significant building type of the medieval period.
* Group Value: The building has group value with other listed buildings in the historic core of Halesworth.