A Grade I Listed Building in West Markham, Nottinghamshire 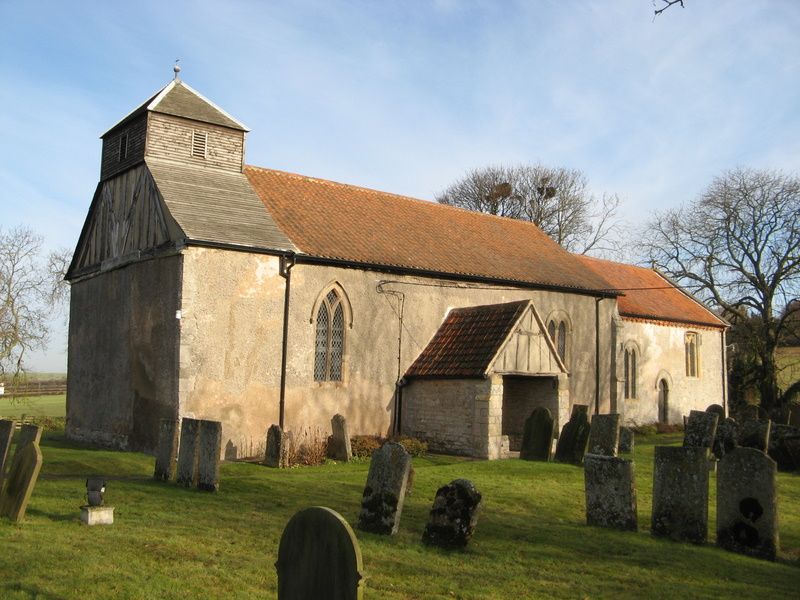 Parish church. Late C12, C13 and C15, repaired 1872, restored
1930-45. Red brick, coursed rubble, ashlar, render, some timber
framing. Pantile roofs. Coped east gable with single ridge
cross. Brick dentil bands to chancel eaves and sprocket eaves to
nave. West bell turret, nave, south porch and chancel. Half
timbered west gable surmounted by weatherboarded turret with
pyramidal cap and single louvred openings to the south, north and
west sides. The buttressed north nave wall is set on a plinth
in parts, the eastern most bay slightly projects and has a stone
band running below the eaves. Single arched 2 light window with
hood mould, to the left is a single arched window with 3 pointed
arched lights, hood mould and label stops. The east wall of the
nave has 4 tie plates. The buttressed north chancel wall is of
brick and is set on a rubble plinth to the east. The east end of
brick and coursed rubble is set on a plinth to the north and has
a single window with 3 pointed arched lights under a segmental
arch. The south chancel with ashlar quoins to the east has a
single C15 window with 2 arched and cusped lights under a flat
arch with remains of a hood mould. To the left is a late C12
round chamfered arched doorway with worn chamfer stops, imposts,
hood mould, worn label stops and wooden door. To the left is a
late C12 double lancet with central decoratively carved motif and
hood mould. To the left is a worn human head label stop. The
nave with C12 herringbone masonry and single buttress plus tie
plate has a larger, single similar window, motif and hood mould
with head label stops. The gabled, half timbered C17 porch is
set on a plinth on the east side. The inner late C12 chamfered
round arched doorway has a hood mould with remnants of label
stops. The wooden C15 door has hinges with some scroll work. To
the left of the porch is a single arched C13 window with Y
tracery, hood mould and human head label stops. Interior.
Dividing nave and chancel is the remains of a C15 screen with 4
chamfered posts and later balustrade running between. In the
south chancel is an ogee arched cupsed piscina and the remains of
a C12 pedestal and a pedestal piscina. The reveal of the south
east nave window is decorated with carved salamanders and vine.
Restored C17 panelled pulpit; some of the panels being decorated.
Round ashlar C12 font with moulded base and 7 arcaded panels each
containing a single primitively carved figure. There are 6 Cl6
benches and a C17 alms box on a pedestal inscribed "Remember the
Poor". On the west wall is a board detailing benefactions of the
parish and dated 1819. In the north chancel is a sheet of lead
decorated with small crests and inscribed "T. Hempsial, R.
Bilyard, Church Wardens 1816." Also in the chancel is a C14
monument of a reclining figure with a dog at his feet and the
remains of 2 angels at the head. There are several C18 floor
slabs. Nave roof with bosses in the form of grotesque faces and
stylised flowers.