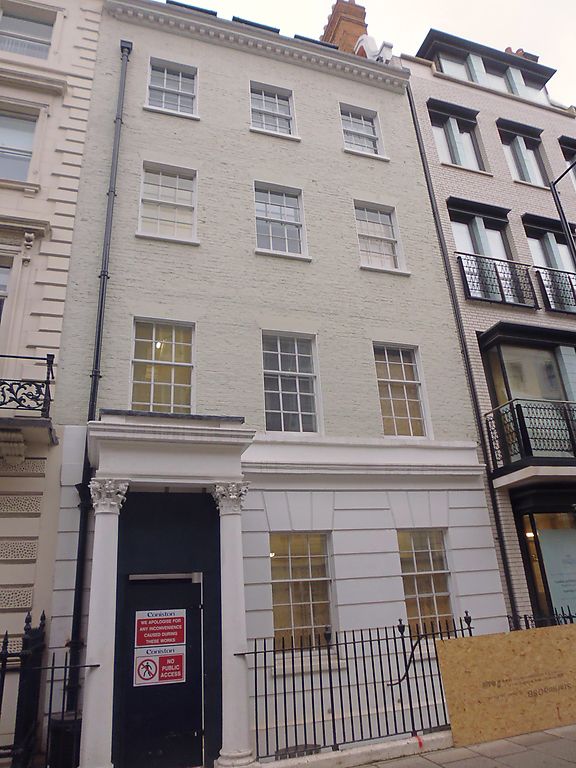 PLAN: two rooms deep, with the stair located at the front; the rear rooms are consequently wider than the front rooms. A secondary stair from second floor to attic is located at the rear of the principal stair. At ground and first floor, a lobby has been inserted between the front and rear room. The plan is more altered at second-floor level, and the basement has been entirely modernised.

EXTERIOR: four storeys high plus basement and mansard attic; three bays wide. The ground floor is faced in channelled stucco. Early-mid C19 porch with Corinthian columns. Windows are six-over-nine pane sash windows at ground and first floor; the remainder are six-over-six. The glazed door and rectangular fanlight date from 1907. The mansard roof has three dormers. The cast-iron area railings are C20 replacements on the original low stone wall. Stone steps with an iron balustrade lead down to a basement area with brick vaults under the pavement. The rear elevation has a canted bay window at basement and ground-floor level, remodelled and rendered. Windows are 1950s metal casements. At the rear is a one-storey and basement building, linked to the house by a corridor. This was rebuilt in the 1950s and is not of special interest.

INTERIOR: the entrance hall has an original plaster modillion cornice, moulded dado rail and skirtings. The elegant stair rises from ground- to second-floor levels and is intact with the exception of the bottom newel post which dates from 1907, replacing a curtail. The stair has an open well, an open string with scroll-silhouette tread ends, column newels, a ramped mahogany handrail and turned column-on-vase balusters. The inner string is ramped and has a moulded rail and skirtings. Stair landings also have modillion cornices. The secondary stair has been rebuilt. The rear ground-floor room has an Edwardian chimneypiece in the C18 style. The chimneypiece in the first-floor rear room is original, and has an elaborate lugged and scrolled surround and marble slips. This room also has an original plaster cornice with enriched modillions, egg-and-dart and dentils, with some disruption from inserted steels. No original doors survive, but some window architraves, panelled shutters and aprons remain in the front part of the building.

Wimpole Street, Marylebone, was developed between c1730-c1770 by the Portland Estate, renamed the Howard de Walden Estate in 1979 when the fifth Duke of Portland died without issue and the land passed through the female line to his sister, Lucy Bentinck, widow of the 6th Baron Howard de Walden. The street consisted of what would be classified as ‘first rate’ townhouses under the 1774 Building Act, occupied by wealthy upper and middle-class residents. The terrace of eight houses, of which No. 78 formed part (Nos. 72-79 consecutive), appears first in rate books between 1760-66, No. 78 being rated for the first time in 1763. Of the terrace, only two houses - Nos. 74 and 78 - survived the extensive rebuilding on the Estate of the 1890s and 1900s when leases expired. No. 78 underwent external alterations in the early-to-mid C19. Like many other private houses on the Estate, No. 78 fell out of residential use in the C20, becoming offices and medical consulting rooms for Harley Street overspill. In 1907 a mansard attic was added and the rear outbuildings rebuilt and extended over the former yard. Structural works were undertaken in 1954-8, when the rear elevation was rebuilt from second to fourth-floor level. At this time the house was subdivided to form an office at basement to second-floor level, and a maisonette at third-floor and attic.

No. 78 Wimpole Street is listed for the following principal reasons:
* Architectural interest: a good example of a mid-Georgian townhouse which formed part of the C18 development of one of London’s principal West End estates
* Interior: although altered the house retains a number of features of interest, including a fine original stair
* Group value: it groups with a number of listed C18 townhouses in Wimpole Street, including No. 74, the other surviving house of the c1760 terrace, and Nos. 10 and 13-16 opposite. It makes an important contribution to a streetscape which, despite extensive C20 rebuilding, retains its essential Georgian character.