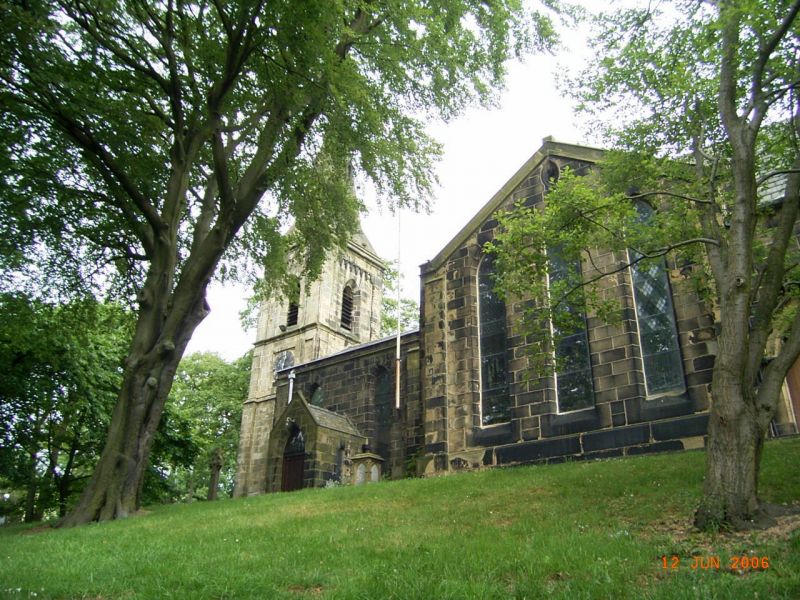 EXTERIOR: In the simple Gothic style of the early C19. The church is long and low, with shallow buttresses, and roofs with cylindrical ridge ventilators under conical caps. The 3-stage west tower has angle buttresses, and a Lombard frieze below a broach spire with lucarnes. A pointed west window is under a statue in a niche, above which is a round clock in the second stage and pointed belfry openings with broad chamfers, and louvres. The 3-bay nave has lancet windows and transepts have triple lancets. The south porch is unbuttressed and has an entrance with 2-centred arch. The east window is 5 stepped lancets under a single arch. A south vestry is attached to the south transept, with trefoil-headed south doorway. The north-east vestry is later, under a flat roof, and has a tall stack rising from the chancel eaves.

INTERIOR: The nave and transepts have polygonal panelled plastered ceilings on arched braces that stand on slender wall shafts. The chancel has a similar roof, but has paired arched braces and a boarded ceiling with rosettes in each panel. There is no chancel arch. Walls are plastered. Where visible the chancel has a parquet floor, with raised floorboards below stalls and benches.

PRINCIPAL FIXTURES: The font, probably of 1824, has a small octagonal bowl with relief panels, on a tapering stem. Other furnishings are mainly early C20 and form an impressive scheme. The chancel screen, dated 1915, has openwork dado and main lights with delicate tracery, under coving with further tracery, and fleuron frieze. Nave benches have ends with linenfold panelling. The polygonal pulpit has rich free-Gothic openwork tracery, which is similar to the communion rails. Choir stalls have square-headed ends with blind tracery, and open-tracery fronts. Stained glass windows of the early C20 are mainly by Powell & Co. Memorials include a distinctive Gothick tablet to long-time organist Thomas Searkey (d.1870), encrusted with organ pipes.

HISTORY: Parish church built in 1823-24 by Thomas Taylor (1778-1826), architect of Leeds who had worked under James Wyatt but by the 1820s was in private practice with many commissions for new churches. The south vestry was added c1901, and soon afterwards the chancel was refurnished. The north vestry is also C20.

REASONS FOR DESIGNATION: Christchurch, Woodhouse Hill, Huddersfield, is designated at Grade II for the following principal reasons:
* Christchurch is one of several Gothic churches built by Thomas Taylor in the 1820s and the building is largely unaltered, retaining architectural character typical of the period.
* Christchurch is also one of several early C19 churches that document the growth of industrial Huddersfield and the need to provide for its increasing population.
* The church retains early-C20 fixtures of consistent quality.