A Grade I Listed Building in Petworth, West Sussex 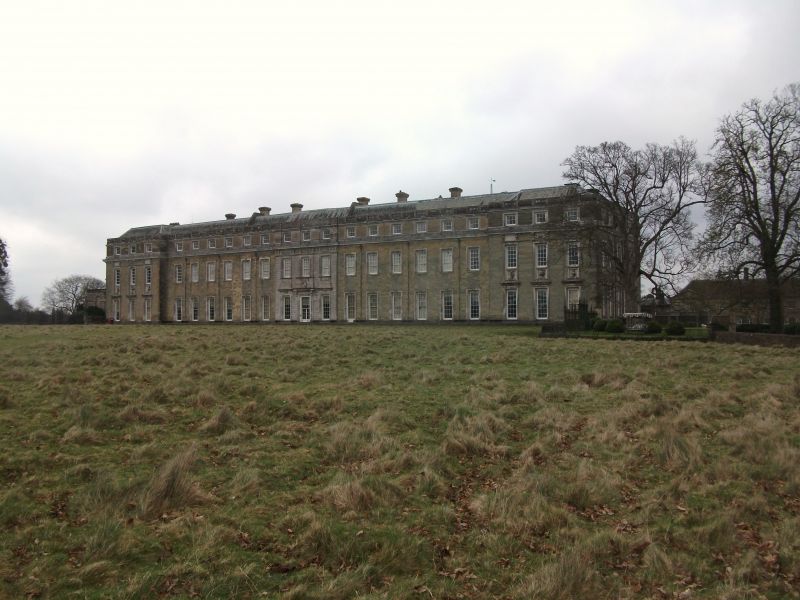 A Mansion. Property of the National Trust. This is the most important residence
in the County of Sussex. The first building here was erected by the first Baron
Percy who was granted a licence to crenellate in 1309. Of this building, the
main structure of the chapel at the north end of the present house survives.
The wine cellar beneath what was once the great hall probably dates from the C14.
The eighth Earl of Northumberland rebuilt or enlarged the house between 1576 and
1582 and the ninth or "Wizard" Earl again did so after 1621. A block of this
date survives towards the north end of the house, and also the long beer cellar in
the basement which runs the whole length of the house. The main body of the house
was erected by the sixth (or "Proud") Duke of Somerset between 1688 and 1696.
The architect was a Frenchman, and it has been suggested that it was Pierre Puget.
Christopher Hussey does not consider this to be the case and has suggested Daniel
Marot. The back part of the house was never finished, and the whole of the east
front north of the porch has never had any symmetrical arrangement of windows, etc
and shows some of the older work of this house. The centre of the main front
originally had a rising roof or dome and statues. A fire occurred in 1714, and
Christopher Hussey has suggested that these were destroyed in that fire, but
Dallaway's History of West Sussex states that they were removed by the third Earl
of Egremont. Sir John Soane made plans for refacing the main front of the house
with stucco but these were never carried out. About 1780 the third Earl of
Egremont converted an arcaded loggia on the north side of the house into a room
with a glass roof now called the North Gallery, to contain part of his famous
collection of pictures and statuary. Between 1869 and 1872 Anthony Salvin remodel-
led the rooms at the south end of the house as the private apartments of the
family and added the porch on the east side.

The house is 322 feet long. The main or west front has 3 storeys and 21 windows.
It is built of local freestone ashlar with Portland stone for the ornamental sec-
tions. Above the first floor is a heavy moulded cornice. Another cornice above
second floor and solid parapet with panels of balustrading. Mansarded slate roof.
The 3 centre window bays and the 3 window bays each end project and have cornices
over the ground floor windows surmounted by busts and elaborate volutes above
the first floor windows supporting the cornice. The 3 centre window bays are
flanked by rusticated pilasters with ornamental panels above the first floor win-
dows and imitation balustrading below them, also projecting cornices over the
ground floor windows with consoles. All the windows in the front are sash windows
with coved reveals, keystones over and glazing bars intact. In front of the House
is a terrace approached by 3 steps with, at each end, a short wall ending in a
pier surmounted by an urn. From this branches out a cast iron railing which
separates the garden from the park and double gate with creating.

The south side has 3 storeys and basement above ground level. Six windows, those
in the basement having segmental heads. The 2 centre window bays break forward
slightly.

The south end of the east front, up as far as Salvin's porch, has been refaced
in the same manner as the other fronts. This has 5 windows and then a projection
of 3 window bays with rusticated quoins. Three storeys and basement above ground
level. North of this the porch projects at right angles and joins the house to
the Estate Office.

In the centre of it is a carriage arch through it forming a porte cochere flanked
by twin free-standing rusticated columns on high plinths. On each side of the
arch is a solid portion containing one window and a niche flanked by rusticated
pilasters. Cornice and blocking course over the whole. The east face to the
north of the porch is plain and undecorated, with windows irregularly placed.
Stone rubble and cement. It has 5 buttresses and at the north end a projection
containing the high pointed window of the Chapel in a wide reveal and a large
segmental-headed window over this.

The interior includes the Carved Room containing probably the finest work that
Grinling Gibbons ever executed in a private house; carving by John Seldon in the
Chapel and elsewhere; and the Grand Staircase painted by Louis Laguerre in 1715-
1720 after the fire.

Many famous people have been entertained at the house; Edward VI in 1551; the
Archduke Charles of Austria, afterwards the Emperor Charles VI on 28 December
1703; the Prince Regent, the Tsar Alexander I and Frederick William III of Prussia
on 24 June 1814; and Edward VII on many occasions.