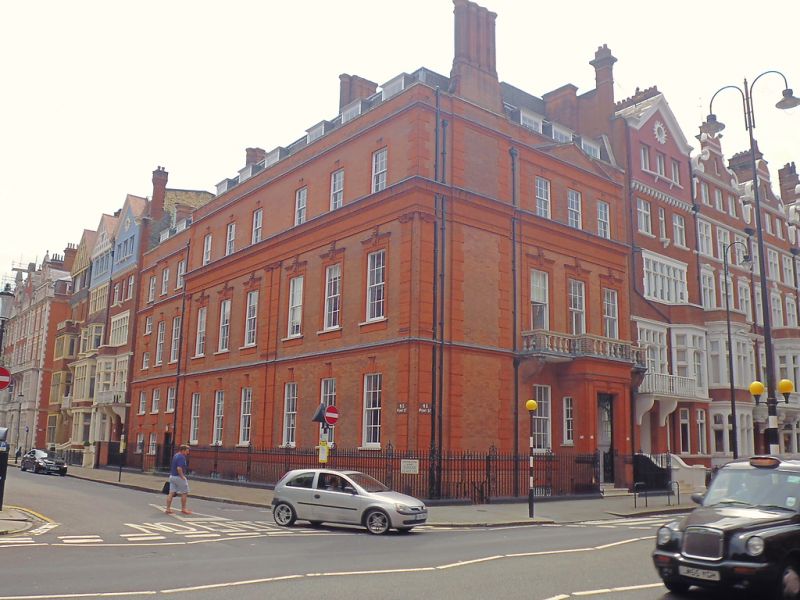 No. 45 Pont Street is a town house of c1888, built by C W Stephens in a classical Queen Anne style.

MATERIALS: the building is constructed in red brick, as required of all new houses in the Cadogan Estate in the late C19, with rubbed brick dressings. The roof is Westmorland slate and the windows are timber sliding sashes. The area railings are cast iron.

PLAN: the building is on a generous corner plot, and fills the full depth of the site. The narrower front elevation faces north onto Pont Street, and the long side elevation faces east onto Cadogan Square. The building is three storeys high, plus a mansard attic lit by dormers, and a basement with area.

The principal rooms are arranged from front to back along the east wall, with the principal stair, which links the ground and first floors only, to the west. A secondary stair runs the full height of the building to the south of the principal stair, and a service stair to the far south runs between ground and third floor, linking the service areas of the house above basement level. A lift has been inserted to the north.

EXTERIOR: the design employs a classical version of the Queen Anne style, executed in two types of red brick, giving tonal contrast between the face of the walls and the architectural dressings. The third storey is treated as a tall attic storey with parapet, above a plain brick cornice. The windows are flat-headed 'Georgian' sashes with horns, generally with a six-over-six arrangement. First-floor windows have a rubbed-brick architrave with cornice and keystone.

Approximately two-thirds of the front elevation is taken up by a three-storey, three-bay, frontispiece, with a central enclosed entrance porch, first-floor balcony with stone balustrade, and third-storey pediment. The first-floor French windows have been altered: the cills raised slightly, and the lower sashes replaced. The remaining eastern third of this elevation is taken up a wide brick chimneystack.

The main part of the east elevation is six bays wide, with windows divided into two groups of three by giant brick pilasters. The southern part of the elevation is treated as a separate building, with three bays and mezzanine levels above ground and first floors.

INTERIOR: the building has an elaborate neo-Classical decorative scheme, most fully expressed within the principal spaces on the ground and first floors. Here interior doors are six-panel carved mahogany with elaborately carved pedimented architraves facing into the stair hall, and mahogany double doors with panelled door-cases and carved architraves interlinking the principal rooms on the first floor. The sweeping principal stair, which runs between ground and first floors, has a decorative wrought-iron balustrade and a mahogany handrail. There are richly decorative plaster cornices, wall panels, dados and skirtings (in some cases carved). The windows have panelled shutters and at ground floor have window seats. The ceilings of the principal rooms have Adamesque plaster-work, and most of the original chimney pieces survive, including two mirrored over-mantles on the first floor. The former ballroom on the first floor retains a number of its original wall mirrors.

The second-floor rooms have elaborately carved architraves facing out onto the hall, and carved six-panel doors. The rooms have carved window architraves, panelled shutters, decorative plaster cornices, and a number of original chimney pieces. On the third floor the detailing is much simpler, with moulded but not carved joinery, no plasterwork cornices and generally more modest chimney pieces. A number of large original painted timber cupboards survive in some of the rooms. Notable survivals in the basement include a large cast-iron range and a servants' board.

ADDITIONAL FEATURES: spike-headed area railings run around the north and east sides of the building.

No. 45 Pont Street is situated in east Chelsea and forms part of the Cadogan Estate. The area was first developed in the later part of the C18 by the architect Henry Holland, who had taken a lease from Lord Cadogan, Lord of the Manor, and laid out Hans Town (named after Lord Cadogan's father-in-law, Sir Hans Sloane). By the 1870s the leases were coming to an end, and the Hans Place Development Act of 1874 allowed for wholesale rebuilding and expansion of the estate, which commenced in 1876. The majority of the new houses were built in blocks as speculations by different building firms, but a few were designed and built for occupation by individual clients. The architects associated with the redevelopment of the estate included many of the leading lights in the Queen Anne movement, such as JJ Stevenson, George Devey, Richard Norman Shaw and Ernest George.

No. 45 Pont Street was built c1888 to the designs of Charles W Stephens (d1917). The house was apparently commissioned in by Sir Kenneth Matheson, but the first occupant, c1890, was Charles EN Charrington, a member of the well-known family of London brewers. By 1908 the house was occupied by Francis Du Cane Godman, a distinguished naturalist. Godman's widow continued to live at the house after his death until the 1940s. In the 1970s the house was converted to offices for Messrs Leigh and Pemberton. Seemingly little-altered during its time as a private house, a number of relatively minor alterations resulted from its conversion to office use. A lift was inserted near the front of the building and there has been some subdivision of rooms on the second and third floors. These have generally been done with attention to the historic detail of the house – replicating cornices along new stud walls, and in some cases reusing, or replicating, original door joinery.

The known career of CW Stephens starts in the mid-1880s with his involvement in the development of Hans Place on the Cadogan Estate. He subsequently got the commission to design a new store for Harvey Nichols in Knightsbridge and was appointed architect to Belgravia Estates Ltd, a company formed to redevelop the area immediately to the north of Hans Place around Basil Street. In 1894 he obtained the commission for reconstructing Harrods (Grade II*) and the commission for Claridges in Mayfair (Grade II). He was also involved in the development of the south side of Knightsbridge, and from 1913 until his death in 1917 was in partnership with EJ Munt. Stephens' commercial buildings belong to the eclectic school of late Queen Anne architecture, with Harrods being his most spectacular.

No. 45 Pont Street is listed at Grade II for the following principal reasons:
* Architectural interest: a handsome, classical, Queen Anne building by a notable local architect, its well-crafted elevations form a strong composition on this prominent corner site;
* Interior survival: the building retains an elaborate and little-altered neo-Classical decorative scheme in the principal spaces, as well as elements relating to the service areas; overall it retains a hierarchy of spaces and fittings which reflect the building's historic use, character, and status;
* Group value: the building is one of a number of listed buildings in the Pont Street/Cadogan Square area, the collective architectural quality of which reflects the wealth and prestige associated with this area at the time of its rebuilding in the late C19.