A Grade I Listed Building in Morland, Cumbria 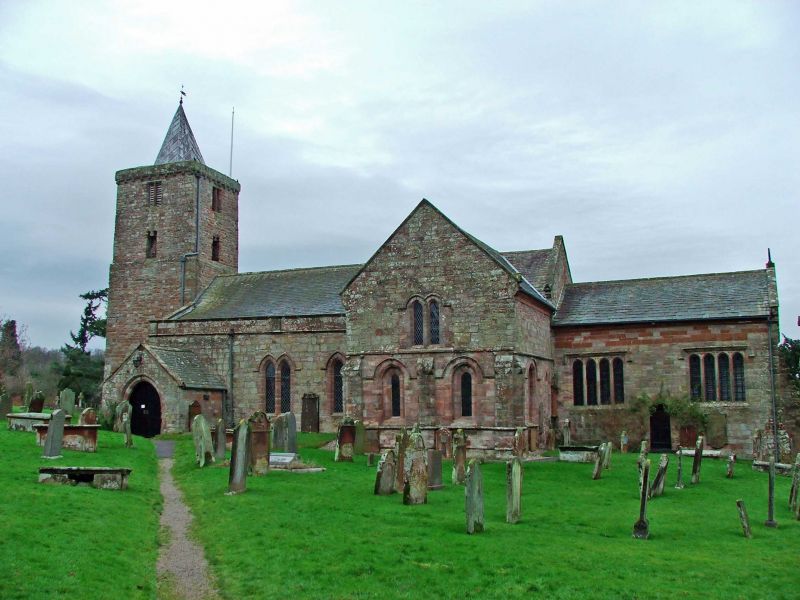 Parish Church, C11 with later additions and alterations; extensively restored in
C19. Coursed, squared rubble with quoins to tower; angle transept buttresses.
Graduated slate roofs with copings and kneelers; stumpy lead spire to tower
carries 1769 weathercock. West tower, 3-bay aisled nave, transept arm, and
chancel. 3-stage tower is pre-conquest with large balusters supporting imposts
to paired openings on each side. C17 gabled south porch has stone benches to
either side. Panelled C18 inner door has C13 surround with pointed head. Two
C19 windows to right in C18 openings. 2 dated panels to nave parapet; 1753 on
centre south and 1772 to west end on south side. C13 lancet windows in south
transept arm were restored in C19. 2 windows on south side of chancel, doorway
between, and east window are all C16; windows have segment-headed lights and
door has 4-centred head with moulded jambs. 1896 vestry to north. Single
lancets on east and west sides of north transept arm are C13, others are C19.
North nave windows are C18 with semicircular heads and decorative leading; 2
largest have re-used architraves similar to those in Morland House. Door below
has medieval fittings. Internally, nave floor is down steps. Tower has massive
chamfered plinth; narrow central door has semicircular head. Pointed arcade
arches have 2 chamfered orders; waterleaf capitals to C12 west responds, chalice
capitals and filleted shafts to C13 east responds. Central pier on north side
is C12 with scallop capital, other piers are C13. Transept and chancel arches
were rebuilt in C19. For details of fixtures and fittings, see R.C.H.M. & "Past
Alive : The story of the Parish Church of St Laurence, Morland" written in 1979
by the Reverend Canon Gervase W. Markham M.A. for the 800th anniversary of the
Church.