Houses of Parliament and The Palace of Westminster 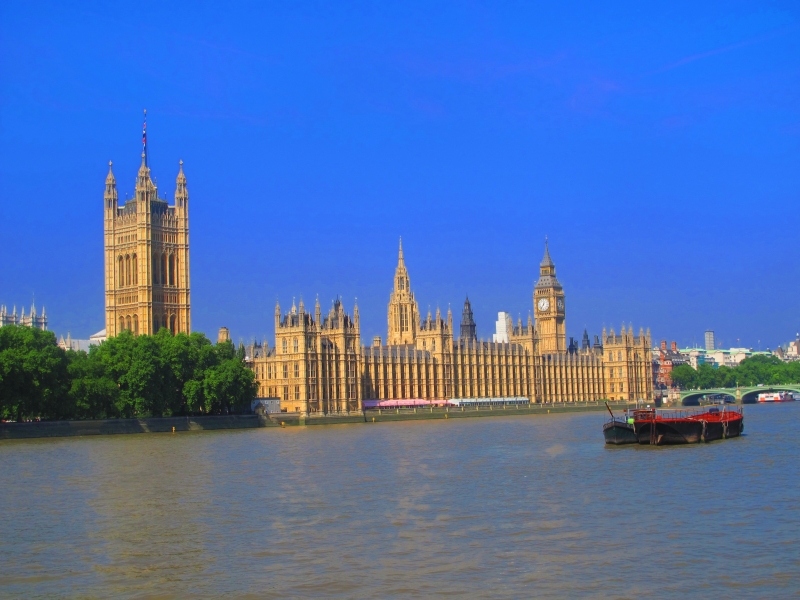 Entry Name: Houses of Parliament and The Palace of Westminster

CITY OF WESTMINSTER
PARLIAMENT SQUARE, SW1(east side)
Houses of Parliament and The Palace of Westminster

The surviving parts of the Palace of Westminster, and the Houses of Parliament are formed of two main phases, starting with Westminster Hall 1097-99, which was remodelled 1394-1401 by Henry Yevele with Hugh Herland (carpenter). The interior of the hall has a vast hammerbeam roof of an exceptionally early date and scale, and has an outstanding late C14 figure sculpture flanking the dais arch. This earlier phase also includes St Stephen's Chapel "crypt", probably built around 1292-97 and 1320, which retains perhaps the earliest surviving lierne vault, and St Stephen's Cloister and Chantry Chapel 1526-29, which were considerably restored after World War II bomb damage.

The second phase consists of the Houses of Parliament (the New Palace of Westminster) which was built from 1835-60, by Sir Charles Barry with detailing, interior decoration and furnishings by Augustus Welby Northmore Pugin. The offices against the side of Westminster Hall, of 1888 are by J L Pearson, where the House of Commons and Lobby were rebuilt after World War II bombing.

The building has slate roofs and galvanised cast iron plate roofs to Barry's work which also has an internal fireproof construction of iron joists and brick jack-arches. It has a cruciform and axial spine plan, with principal elevations facing the river. The massing by Barry combines symmetry on the river front terrace with the asymmetry of the major vertical accents which include the Elizabeth Tower (Big Ben) and the central fleche and turrets above the roof line.

Pugin's contribution included the perpendicular Gothic detailing of the rhythmic buttresses and bay windows, the close panelling with open and blind tracery and the wealth of sculpture, carved crockets, pinnacles and finials. Pugin's interiors in the Houses of Parliament are the best preserved and most complete example of the quality and ideals of his secular decoration including all details and furnishings, and are combined with a complete programme of mid C19 and early C20 wall paintings. The loose items of furniture are not covered by listing.
.
The Houses of Parliament include the Great vaulted Royal Entrance at the foot of the Victoria Tower, the Lords entrance with buttressed pinnacled porch in centre of the Old Palace Yard range, St Stephen's Porch gatehouse across the south end of Westminster Hall (giving access to cross-axis of plan), St Stephen’s Hall, the north entrance to Westminster Hall with its great window above, and the crocketed finialed gable flanked by square battlemented towers (restored 1820). Three gateways in EM Barry's cloister-arcade to the east range of the New Palace Yard terminate in the virtually free-standing clock tower of Big Ben. The riverside terrace has cast iron ornamental lamps on the buttress-piers of the Embankment wall.

Historical Note: St Stephen's Hall was the location for a number of protests by suffragettes from the Women’s Social and Political Union (WSPU), the militant suffrage organisation founded by Emmeline Pankhurst in 1903, which advocated direct action in support of its campaign for the vote. The Palace of Westminster was an important site of protest as it represented the Parliamentary system that suffragettes wished to access. In November and December 1906 suffragettes entered the Hall and held impromptu meetings there leading to several arrests. The entrance to St Stephen’s Hall was the focus of much militant protest during the regular Women’s Parliaments held by the WSPU from 1906-1911. Women attempting to present resolutions to Parliament would be pushed back by police and hundreds were arrested.

In February 1908, a large group of suffragettes managed to get into the yard utilising a large removals van, and were able to enter the hall before being arrested. In April 1909 four women entered the lobby to speak to their MPs. They then chained themselves to statues of Walpole, Lord Somers, Lord Selden and Lord Falkland. The spur of the statue of Lord Falkland’s boot was damaged when the women were removed. In June 1909 suffragette Marion Wallace Dunlop, accompanied by Victor Duval of the Men’s Political Union stencilled a passage from the Bill of Rights on the wall. When Wallace Dunlop was gaoled for the offence she became the first suffragette prisoner to go on hunger strike.

At the time of the 1911 census, Emily Wilding Davison hid in a broom cupboard in the building, in order that she be enumerated within Parliament. She was found on the night of the census, and the official record states ‘found hiding in the crypt of Westminster Hall since Saturday’; at the top of the page is a note: ‘apply Common Row police station for more information’. It was a deeply symbolic act, representing the ultimate goal of the campaign, to have a presence in Parliament, through the electoral process. A plaque records the important protest. Davison went on to commit the most famous protest associated with the struggle for suffrage, when she was fatally injured by the King’s horse at the Epsom Derby in 1913.