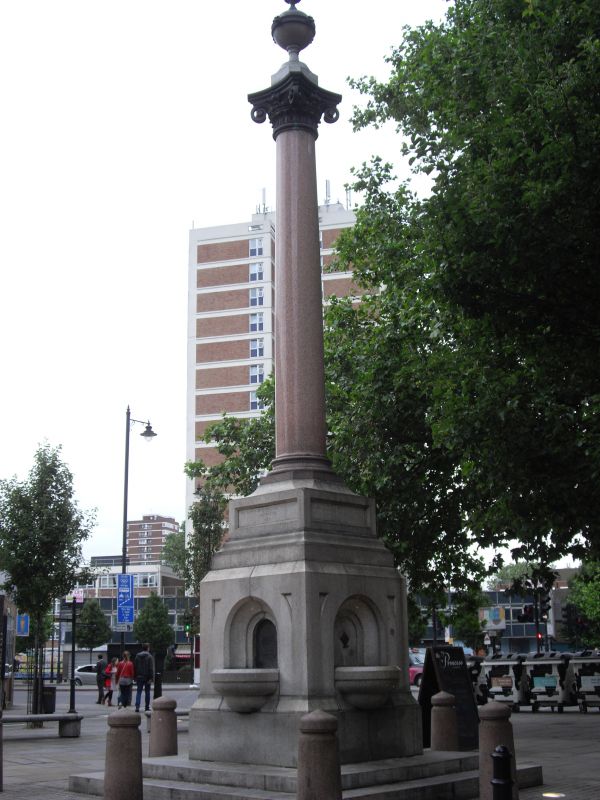 II
Columnar drinking fountain. 1880 by A Nicholson.
MATERIALS: Pink and grey polished granite, bronze finial fittings.
DESCRIPTION: 2 granite steps lead up to tall grey granite plinth with semi-circular basins projecting from all 4 sides, backed by arched niches. Narrower upper plinth inscribed on 2 sides; 1876 METROPOLITAN BOARD OF WORKS and VESTRY OF ST LEONARD, SHOREDITCH. Further inscriptions read (south side) GREAT EASTERN STREET OPENED BY THE METROPOLITAN BOARD OF WORKS 1876 and (north) NEITHER IS HE THAT PLANTETH ANYTHING; NEITHER HE THAT WATERETH BUT GOD THAT GIVE THE INCREASE (I Cor. 3:7). Above this a tall Ionic column of polished red granite with sandstone capital (discoloured) and a ball finial in the form of an orb. 8 red granite bollards surround the erection, North face of upper plinth inscribed: "This column erected by the Vestry of St Leonard, Shoreditch, 1880" and artist's name.
HISTORY: the fountain was erected to ornament Great Eastern Street, an important new thoroughfare connecting Commercial Street and the docks with the principal east-west route to the north of the City. The designer, A. Nicholson, was a local stone merchant based nearby in Mark Lane. The fountain was moved a short distance to the south-east as part of a programme of street improvements overseen by Transport for London in 2002/3.