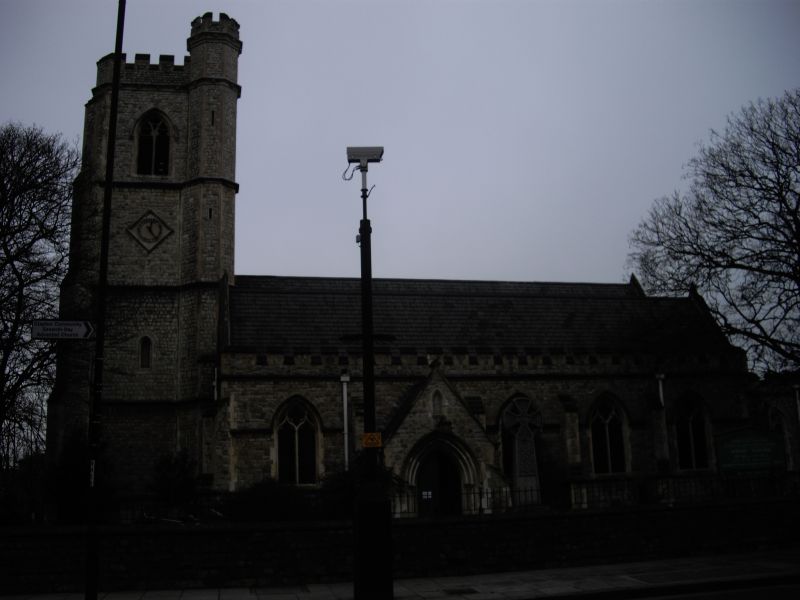 EXTERIOR: The church is built in a late medieval style with details from the C14 and C15 although the predominant character is Perpendicular, and described as 'interesting as an effort to copy local character [of medieval churches]' (Cherry and Pevsner). There is a prominent four-stage tower with higher, polygonal south-east stair turret; both with embattled parapets, and angle buttresses to the tower. On the south face there is an unusual clock face with numerals carved in stone. There is no clerestory. At the west end there is doorway with continuous moulding. The aisles are under their own gabled roofs and have two-light reticulated windows in the N and S elevations, separated by buttresses between each aisle bay. There are angle buttresses at the corners. In the chancel there are two-light reticulated windows (one N, two S) with more ornate tracery than in the aisles. The priest's door (S) is blocked. There is a plain, mullioned three-light E window, probably inserted during the 1950s refitting.

INTERIOR: At the W end there is a tall tower arch with fillets on the mouldings. The arcades to the wide aisles have alternate octagonal and round piers, foliage capitals and moulded bases on plinths. Large foliate corbels act as bases for the wall-posts in the nave but these `float' somewhat awkwardly some 20cm above the capitals. The SW capital bears the names of those killed in the First World War. The repair to the 1944 damage has had a profound effect on the building by closing off the former chancel with a plain wall. The arch-braced roofs no doubt date from the 1950s work.

PRINCIPAL FIXTURES: The furnishings are a complete replacement having been brought in from St Andrew, Bethnal Green, and the floor is of light-coloured composition small artificial rectangular tiles throughout. There are simple pine benches with angular-shaped ends and a conventional brass eagle lectern. The font (under the tower) is octagonal with symbols of the Evangelists, IHS, Dove etc. The octagonal pulpit seems reduced from its original height and has open tracery. There is a large painting of the Crucifixion (formerly part of a triptych) by Alfred Soord, 1906 (signed and dated). A similarly large painting, also by Soord, of the Lost Sheep, under the tower. There is late C20 stained glass of the Adoration with a bright blue ground at the E end of the S aisle. The organ is by Hill & Son of London.

SUBSIDIARY FEATURES: To the W, no. 109 `S BARNABAS HALL & SCHOOLS' (as it says on an inscription), dated 1884. These are also built of ragstone and are in Tudor style.

HISTORY: The church was built for £3,000 to serve the rapidly expanding population of early Victorian Hackney. In the application for a grant from the Incorporated Church Building Society it was said that the area was populated by a `Very poor class of Labourers & those who trust to precarious employment.' The endowment and half the cost of the vicarage was paid for by Joshua Watson (1771-1855), the leader of an influential group of Evangelical churchmen known as the Hackney Phalanx. The original building aimed to seat some 607 (570 of the seats were free) and was not planned with a N aisle but this followed on a few years later, no doubt to accommodate more people in this rapidly growing area. The ecclesiologist was critical of the church when built, for its lack of archaeological correctness. R.T Withers re-arranged the chancel in 1874. The architect, Arthur Ashpitel FSA (1807-69) was a local man and had been born in Hackney. He commenced practice in 1842 but suffered ill-health after 1855 and travelled abroad but still kept up architectural practice. He is buried at St John's, Hackney. The church was damaged by bombing in 1944, necessitating extensive repairs and changes: William C. Lock oversaw these, and the church was rededicated in September 1958.

REASONS FOR DESIGNATION:
The Church of St Barnabas, Hackney, is designated at Grade II, for the following principal reasons:
* It is a good early Victorian Gothic church reflecting the newly-developed desire to create churches faithful to their medieval predecessors. The post-war changes have had no significant effect upon the exterior of the building.
* Its association with a key figure in the C19 Evangelical Movement.
* It has group value with the vicarage and school.