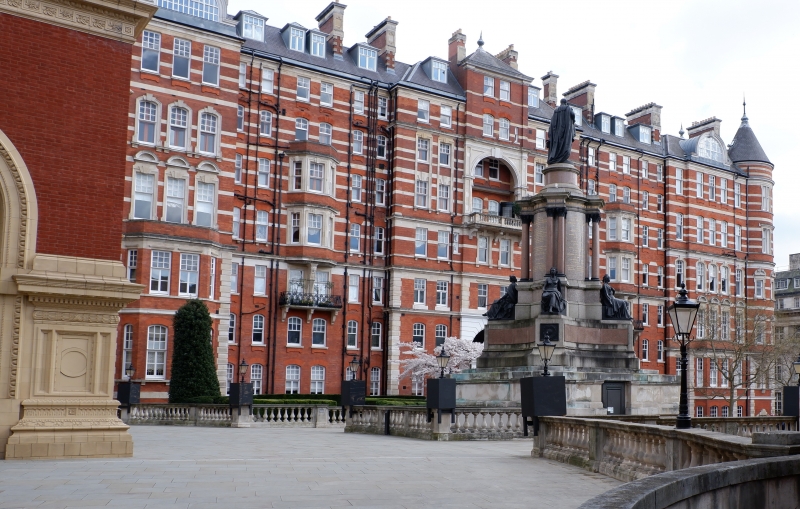 IN the entry for:-
86/40 & 94/11 PRINCE CONSORT ROAD, SW7
24.9.81 Albert Court
GV II
The description shall be amended to read:
Large, purpose-built block of mansion flats. 1890-c1900 by Frederick
Hemings, succeeded by R.J. Worley. Faced in red brick with horizontal
stone bands and dressings. Slated hipped roofs with tall brick and
stone slab stacks and finials. Main western facade of 7 storeys and
semi-basement. D-shaped plan, the north and east facades following the
crescent line of the former Royal Horticultural Society's Garden;
interior light wells with tiers of open arcaded linking bridges,
replicating the ground floor corridor, make possible the grand plan
form of the individual flats. Long main western facade with 3 centre
bays projecting and projecting bays at angles. Central stone entrance
surround of paired columns flanking a round-arched entrance and
supporting a balustrade fronting a channelled stone lunette at 2nd
floor level. Above this, at 4th floor a balustraded balcony with
projecting round-arched portico on attached columns sheltering the
4th and 5th floors supporting the 6th floor which has an attic storey
above the roofline. Flanking the central bays, single bays at 3rd
floor with cast iron balconies and 2 floors above of canted bay
windows. Most ground and first floor windows segmental arched with
gauged brick heads and aprons. Other floors segmental and flat arched,
some with stone architraves. Glazing bars to top lights only. Other
facades in similar style. South-eastern and south-western corners have
conical roofed turrets; north-eastern corner denoted by a full height
rectangular bay and rectangular boiler chimney stack. South facade
with outer bays having grand stone paired balustraded balconies with
Corinthian columns through 4 floors, linked across central bays with
balcony at lst floor level. The curved north/east elevation has
continuous balustraded balconies at 1st and 2nd floor levels, with
the entrances marked by a ovolo section attic roof. 2nd floor windows
pedimented. Chief internal features are the corridor running through
the building from east to west, the mahogany and iron balustrading to
the staircases and landings to their full height, and the principal
reception rooms, with original plasterwork detailing.
Albert Court is of significant group value, due to its relationship,
as part of the masterplan for the area, with the Royal Albert Hall,
the Memorial to the 1851 Exhibition and Albert Hall Mansions, all
undertaken under the auspices of the 1851 Commissioners and their
architectural advisors, including Norman Shaw and Alfred Waterhouse.
It is also significant in echoing the original plan form of the Royal
Horticultural Society Garden Layouts.
This mansion block was originally conceived by the freeholders, the
1851 Commissioners, as the first stage of a larger private development
involving the erection of 4 blocks of flats on either side of Prince
Consort Road, flanking the Royal Albert Hall to the north and the
Royal College of Music to the south. Building began on Albert Court
in 1890 to the designs of Frederick Hemings but, following the
collapse of developer George Newman's backers, the liberator Building
Society, in 1892 and the death of Hemings in 1894, the building had
only reached 3rd floor level; Albert Court was leased for completion
to the Albert Court Syndicate and finished to R.J. Worley's designs
between 1896 and 1900.
Survey of London, Vol. XXXVIII
The Builder, 4 October 1890 & 8 August 1891
The Architect, 8 & 15 March l901 and 11 & 18 November 1904.