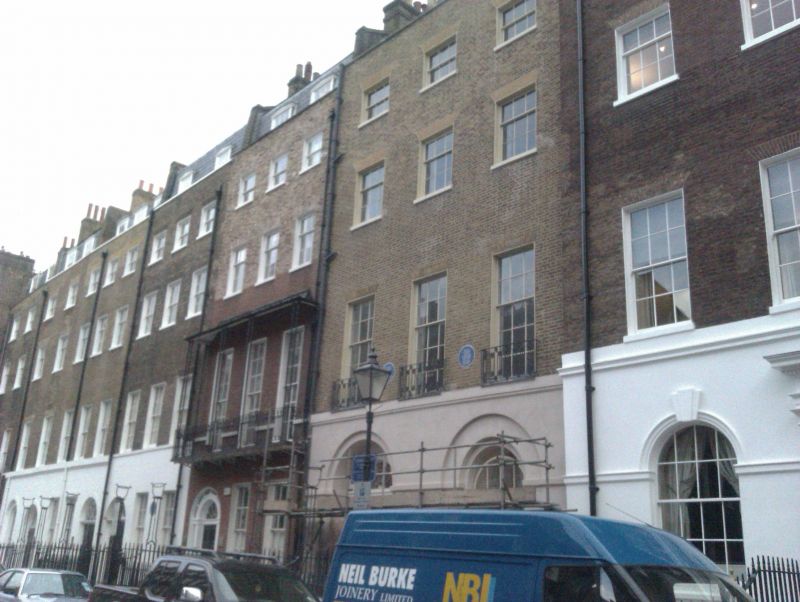 Group of terraced town houses. 1775-78 rebuilding with some early C19 alteration
and a number with alteration or refurbishment as offices in the late 1970s and
early to mid 1980s. Brown brick, the ground floors stuccoed apart from Nos 18
and 24; slate roofs. All have similar plan type with stairwell separating large
fall width front and rear rooms and with bowed rears to St James's Park.
4 storeys, basements and dormered mansards. 3-window wide fronts except the 2-
window wide fronts of Nos 22, 22A and 24. Entrances to left in Nos 16 to 20 even
and to right in Nos 14 and 22, 22A and 24, semicircular arched doorways with
panelled doors and radial patterned fanlights; No 16 has larger arched opening
recessed for one order as is the ground floor window, the arches linked by impost
string; No 18 has door with side lights and the glazing continued around fanlight
archivolt. Recessed glazing bar sashes under flat gauged arches. 1st floor sill
band; parapet with coping. No 18 has tent-roofed cast iron verandah-balcony to
1st floor. Wrought iron area railings, Nos 18, 20 and 24 with lamp standards
and simple scroll work, spike and urn finials. Bowed rear elevations have deli-
cate cast iron balconies. The interiors have particularly well designed stone
geometrical staircase rising on semicircular niche plan with delicate wrought
iron pattern balustrades, top lit from oval lantern; some good original ceilings
in delicate Adam style and statuary marble chimney pieces, panelled shutters,
etc. No 20 has early LCC plaque to Lord Palmerston who was born here in 1784.
This part of the street was originally a close called Park Street, separated by
a wall from the western part called Queen Square. Part of an exceptional group
of late C18 and Queen Anne houses.