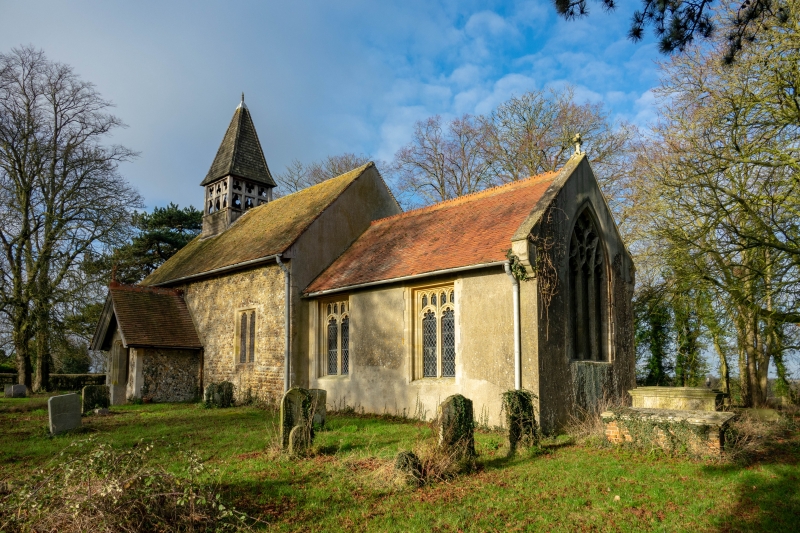 II*
Nave and western part of the chancel C11; chancel extended east in the C14. Rood stair turret and bellcot frame are C15. N chapel added early C16, demolished 1710 when the N wall of the chancel was rebuilt. Chancel arch and part of chancel again rebuilt 1895, when the bellcot was rebuilt and the S porch added or rebuilt.

MATERIALS
Rubble, including pebbles. Some herringbone masonry in nave and part of chancel.

EXTERIOR
A tiny church. Small, timber openwork bellcot with a small, shingled spire over the W end of the nave. One C15 window in the S side of the nave to the E of the porch. C19 stone S porch with barge boards on the gable. The S door is plain and rectangular externally and the door has C12 hinges with large C shapes ending in stylised beast heads. The lintel has a partial, carved inscription. The nave N wall has a blocked, plain rectangular doorway and a C15 window like that on the S, and both sides have some herringbone masonry. The rood stair turret has a small, blocked light. The chancel has C15 windows in the N and S wall, and a large C14 E window with flowing tracery.

INTERIOR
The rerearch of the S nave door is tall and round-headed, suggesting a C11 date with the straight lintel inserted in the C12. The remains of the blocked N door are similar. The chancel arch, rebuilt in 1895, in a plain, early Norman-style using brick and stone. A shallow sink built into the N jamb of the chancel arch was found in the churchyard and may have been part of a reliquary or a piscina. Carved corbels on either side of the chancel arch probably relate to the former C15 screen, which must have been very low. A single early C16 jamb from the arch to the former S chapel survives in the S chancel wall. The bellcot is supported on an arch braced C15 frame resting on large floor plates at the W end of the nave, an unusual arrangement for Suffolk, but more common in Essex.

PRINCIPAL FIXTURES
Plain, C14 octagonal font with a C19 cover. C14 chancel piscina with a heavily moulded ogee arch, headstops, crockets and a finial. A good set of C15 benches, with blind tracery panelling and small buttresses on the ends and backs. One large C18 box pew. A few fragments of medieval glass in the heads of the nave N and W windows, some of it in situ, and a good C19 window in the nave S. A fragment of a C17 tomb from the now-demolished N chapel, a kneeling woman with a ruff, survives loose in the church: she may have been a member of the Turnour family. Late C19 or early C20 chancel screen in a late Perpendicular style. C19 chancel stalls with poppyheads.

HISTORY
Little Wratting church is mentioned in the Domesday book, and the present church was in existence by that date. The churchyard has two distinct levels separated by a curving bank, suggesting the presence of an Anglo-Saxon circular churchyard. The nave doors may have been remodelled with straight lintels in the C12, and the chancel was extended eastwards in the C14. The nave was remodelled in the C15, with a new rood screen, with a loft and probably altars on either side lit by the C15 nave windows. The bell cot was also added in the C15. A large N chapel was added in the early C16 for the Tournor family, but it was demolished in 1710. The whole church was restored in 1895, when the chancel arch was rebuilt.

REASONS FOR DESIGNATION
The church of St Mary, Little Wratting, is designated at Grade II* for the following principal reasons:
* For its very early fabric, reflecting its C11 origins, and a very early door
* For the interest of the subsequent medieval phases.
* For the careful restoration of 1895, and with its handsome bellcot tower.