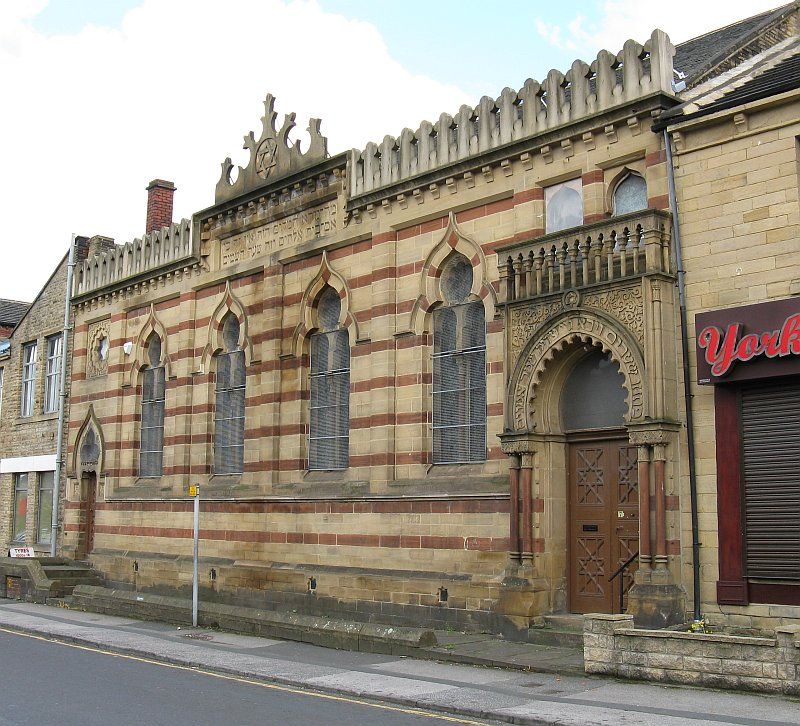 EXTERIOR: Bowland Street elevation has banded ashlar, a technique known as ablaq in Arabic, with chamfered plinth, bracketed eaves, and roof cresting hiding the slate roof. Central raised panel inscribed with Hebrew inscription (Genesis 28: 17) beneath cresting incorporating `Star of David'. Six bays with a doorway in the first and sixth bays. Main west doorway is under a lobed horseshoe arch supported on twin red sandstone columns with Byzantine capitals with arabesque carving. Hebrew inscription to the arch (Isaiah 26.2) with Star of David and arabesque spandrels above. Topped by pierced stone arcade with two small ogee-arched windows above. Double wooden doors with geometric panels incorporating eight-pointed stars, coloured and leaded glass overlight. Secondary, east doorway is under an ogee arch with moulded framing encompassing a semi-circular and ogee-arched overlight with coloured and leaded glass, and carved arabesque panel to either side of doorway. Single wooden door with geometric panels. Above is a decorative light in shape of an eight-pointed star set in a sunken panel with geometric strapwork and multi-lobed rosette. In between doors are four large windows, each two-light lancets with multi-lobed rosettes above with ogee-shaped hood moulds. Geometric coloured and leaded lights based on eight-pointed star motif.

INTERIOR: Prayer hall has barrel-vaulted and concave-arched roof with three slender shaped timber tie-beams, the outer tie-beams supplemented by two iron tie rods, and coffering to the barrel vault with plasterwork with interlocking eight-pointed star design. A cusped and lobed arch frames the Ark apse at the east with rectangular frame and arabesque spandrels. Combined bimah (platform), pulpit, and wooden Ark painted white and gilded, on a marble base. Tall, square shape with timber grille-work in arch and door fronts (termed mashrabiya, a feature typical of Egyptian mosques), and miniature hexagonal domed kiosk. Doorway to either side with lobed arches and square frames incorporating abstract lily design. Pitch-pine pews to either side of central aisle with ogee arch detailing and large storage compartments for prayer books and shawls. Choir loft at west framed by cusped and lobed arch. Wooden grille to balcony with fretwork in form of eight-pointed stars. West porch has inner double panelled and glazed doors opening into vestibule. Two lights to each door with geometric coloured and leaded glass, also in six round-arched overlights; similar double doors to rear of vestibule, leading to choir loft stairs. Double wooden and half-glazed doors into prayer hall from vestibule, with narrow side lights with geometric coloured and leaded glass. Open well staircase to choir loft with swept wooden handrail and decorative iron balusters. Similar staircase at east end to rabbi's room. Moulded cornices to original school room and rabbi's room.

HISTORY: Bradford was unique in this country in building a Reform synagogue before it acquired an Orthodox synagogue. It was built for a progressive German Jewish congregation attracted to the city by the developing textile industry. Upon affiliation with the West London Synagogue of British Jews in 1878, a former timber yard on the south side of Bowland Street was purchased for £700. Building work commenced on 5 January 1880 and consecration took place on 29 March 1881. The cost was `somewhat under £2,000'. The architects were Francis and Thomas Healey, known chiefly for their designs, alterations, and additions of numerous churches in Yorkshire.
Bradford was only the third purpose-built Reform synagogue in Britain. The first was Park Place, Manchester (Edward Salomons 1857-8), destroyed in the Blitz in June 1941, and the second was the West London Synagogue, Upper Berkeley Street (1870). No further non-Orthodox synagogues were constructed before World War I, 3 were built in the Inter-War period, and progressive synagogues became more common after 1945.

REASONS FOR DESIGNATION
The Bradford Synagogue (Reform) is designated at Grade II* for the following principal reasons:
* It is perhaps the most thoroughgoing example in England of a synagogue built in an eclectic Islamic Revival style, featuring Moorish, Mamluk, and Moghul styles both outside and inside, linking it with a late-C19 vogue for Orientalism in synagogue architecture across Europe
* Despite being built originally abutting other buildings in a closely-grained urban environment, the exotic design of this small provincial synagogue by Francis and Thomas Healey successfully emphasizes the religious difference of the congregation within the larger community
* The unaltered prayer hall in this 1881 synagogue was laid out from its inception with a Reform floor plan, manifested in the east end Bimah, lack of women's gallery, and inclusion of choir loft
* It is rare, being the second oldest surviving Reform synagogue in the country, originally the third purpose-built Reform synagogue, and has the additional social interest in that the Jewish community in Bradford built a Reform synagogue 25 years before an Orthodox synagogue