A Grade I Listed Building in Bridport, Dorset 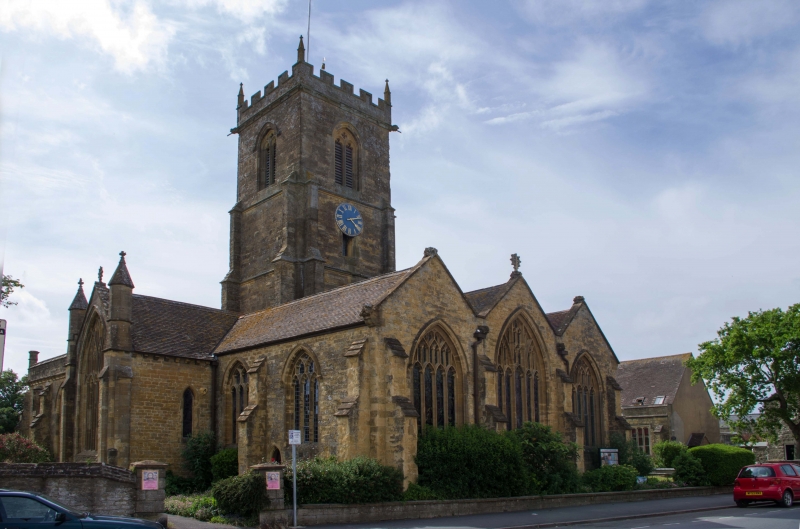 Exterior: From the road the dominant view is of the impressive triple-gabled and buttressed east end, of 1860, with Perp traceried windows of five lights (chancel) and four lights to the chapels. The north and south windows to the chapels have three-light windows with reticulation units; these are matched in the aisles, where the medieval tracery was replaced in 1860. The aisles have solid parapets above a string course of fleurons. The transepts have big gabled ends with Perp windows (six lights south, five lights north), seemingly not renewed 1859-60. The square angle buttresses with chamfered corners topped by octagonal pinnacles are an Early English feature. West of the south transept is a two-bay addition probably of the late 14th century, containing a chapel (of St Katherine) with a two-storey porch to its west. The porch has a standard Perp two-centred moulded arch, and a small oriel window above. It also has a small octagonal chimney stack at the corner of the parapet, with a crenellated rim; the oriel perhaps lit a priest¿s room. The nave has three-light Perp windows between buttresses; four bays clear on the south side, six on the north side. The two west bays are of 1859-60, virtually indistinguishable from the medieval work. The west front is gabled in the centre, with a door under square label, and four-light window. The ends of the aisles are treated as rectangular blank walls. The imposing tower is late 14th or 15th century, and rises above the roof in two stages, with offset buttresses at the lower stage, and a two-light bell opening in each face of the upper stage. It has an embattled parapet with a continuous moulding around the merlons. The square angle-pinnacles are small and insignificant. Access to the tower is by a big stair turret in the angle of the north aisle and transept, then horizontally through a passage over the aisle roofs into the tower.

Interior: Floors mainly stone flagged. The nave arcades have Perp piers that are a variant on the standard four shafts and four hollows pattern ¿ here, the north and south sides of each pier have a flat face flanked by hollow chamfers, the east and west faces each have three shafts continuing up to the arch mouldings. The former room over the south porch was opened up to the south aisle with an arched opening above the internal porch door, and by removing its eastern wall towards St Katherine¿s chapel. The rear arch of the oriel window which lit this room has shafts and ring-moulded capitals in the E.E. style; if in situ, this implies that the porch may be 13th century with Perp remodelling. The transepts have in their east walls arches, now blocked, to former east chapels. E.E. fluted trumpet capitals. In the west wall of the south transept is a former lancet window which now opens into St Katherine¿s chapel. The crossing piers are Perp, with slim shafts and a little foliage decoration in bands at the capitals. Over the crossing is a ribbed vault with a large bell-hole in a concave-sided lozenge. This must all correspond with the rebuilding date of the tower. The chancel and its chapels are all Victorian, continuing the style of the crossing and nave. Nave and transepts have ceiled wagon roofs with moulded ribs and carved bosses, the aisles have lean-to panelled roofs with plain rafters on carved corbels. The roofs in the west arm were conservatively repaired after fire damage in 1996. The chancel roof is more elaborate, of dark stained timber with hammerbeam trusses. The north chapel serves as an organ loft and sacristy.

Principal Fixtures: On the outside west wall of the south porch is a badly weathered medieval carving from St Andrew¿s chapel (see History), placed there in 1883. Light oak bench seating in the nave and aisles, of the late 20th century. The chancel retains few fittings; a late 20th century reordering installed a nave altar and simple three-sided communion rail just west of the crossing. Late 20th century nave benches. Heavy pulpit of Caen stone, 1860, with much Perp carving and three sides opened up beneath ogee arches to form a frame for a high relief scene of the Sermon on the Mount. The font is Perp, octagonal with quatrefoil panels on the bowl, and a heavy panelled foot. At the west end of the south aisle, the Royal Arms painted on board in an arched frame; said to have been given in 1820, now with arms of Queen Victoria. Good pale oak organ case, 1984-8. In the north transept is a trefoil-headed piscina of the 13th century. In the south chapel is a Gothic oak reredos, 1907, and an entrance screen of wrought-iron, from a reordering and restoration of the chapel in 1900, when encaustic tiles were laid in the sanctuary. Monuments: The outstanding monument is in the north transept, a knight in chain mail of c. 1250, possibly John Gervase d. 1262; the face was restored c. 1860. Small brass in decorative frame, to Edward Coker, gentleman, shot in 1685 by one of the Duke of Monmouth¿s officers. Slate tablet to Katherine Frampton d. 1705, with naive incised decoration. Stained glass: a varied collection of 1850-1914. East window with typically bright colouring of c. 1860. South chapel east, by A.L. Moore, 1902, depicting Solomon and the Queen of Sheba. South chapel south, second from east, by E. Baillie, 1851. The south transept east dated 1865 may be by Clayton & Bell. St Katherine¿s chapel south window is c. 1894. Four in the nave of c. 1890-1914; the first from east (north wall) signed A.L. Moore, 1908, and the fourth signed Cox, Son, Buckley & Co., London, c. 1890. North transept east also by Moore, 1908.

Subsidiary Features: Large churchyard with a yew walk to the south porch, and many good monuments, including prominent obelisks near the road. South-east of the chancel, gatepiers with heavy V-jointed rustication, dated 1831.

History: One of four Saxon boroughs in Dorset, Bridport was a substantial settlement by the 11th century. The earliest parts of the present church are early 13th century, probably indicating rebuilding on the site of a Saxon predecessor. As Bridport grew from the 13th century, the centre of settlement moved northwards, accounting for the church¿s position on the southern edge of the old town centre. This resulted in the building of a chapel of St Andrew dedicated in 1362, on the site of the town hall c. ¼ mile north of the church. It was demolished by 1798. Several chantries in the church were endowed in the late 14th century (1368, two in 1387, two in 1400) and these may coincide approximately with the Perp rebuilding around the crossing, and of the south chapel and adjacent porch. Galleries were added over the aisles in 1717 and 1790, removed in 1859. The north transept was `repaired and beautified¿ in 1776 for the use of the poor, at the expense of Mr Jullantigh. Thomas Hardy seemingly did not approve of the restoration of 1859-60. In Wessex Tales (1888) he wrote, "The church had had such a practical joke played upon it by some facetious restorer or other as to be scarce recognisable...", which is odd since the `facetious restorer¿ was John Hicks of Dorchester, to whom Hardy was articled 1856-62, and became an assistant, 1867-9. Pevsner offers `congratulations¿ for Hicks¿s restoration. John Hicks (1815-69) was born at Totnes, Devon, and worked as an architect in Bristol c. 1838-48 before settling in Dorchester. He restored or built at least 27 churches, mostly Gothic. He was popular, amiable and scholarly, and was seemingly at work on at least three churches when he died; yet his death went almost unremarked, and he is little known now except for his association with Hardy.

Reasons for Designation: The church of St Mary, Bridport, is designated at Grade I for the following principal reasons:

¿ An ambitious parish church on a site at the centre of the Saxon borough, though significantly south of the later medieval development of Bridport

¿ Some Early English fabric and cruciform plan surviving from a major rebuilding in the early 13th century.

¿ Fairly sympathetic rebuilding of the east end, and lengthening of the nave and aisles in 1859-60, by John Hicks of Dorchester.