A Grade I Listed Building in Whittlesey, Cambridgeshire 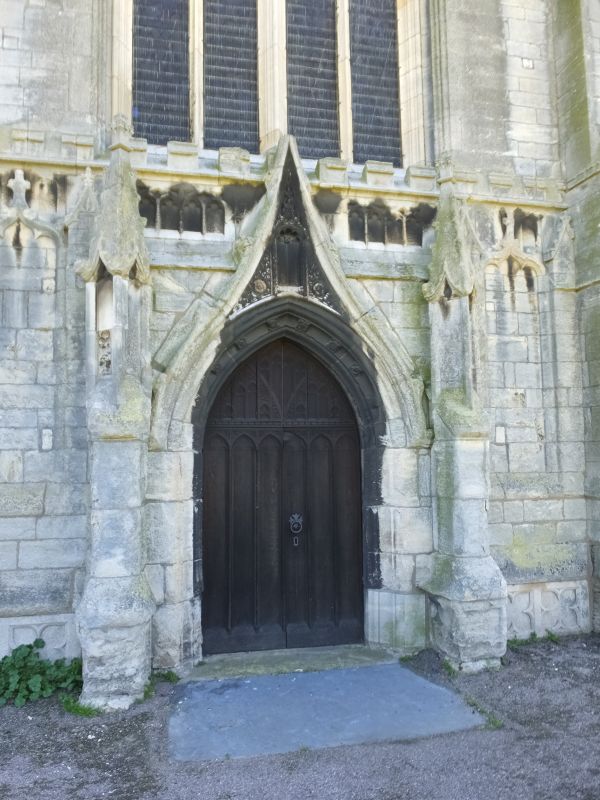 Parish Church. Mainly C14 nave, North and South aisles. C13 North arcade and
chancel arch. Fine West Tower of C15 and chancel extension of similar date.
Restored 1862 and C20. Rubblestone and Barnack limestone dressings. Roofs,
leaded and of copper. Plan of West Tower, Nave, North and South aisles, chacel
with North and South chapels. West tower of four stages, embattled with
crocketed pinnacles at corners, gargoyles to main cornice and a frieze of quatre-
foils on double moulded base with blank arcading to ground stage and to second
stage. Three stage clasping buttresses with the second stage gabled, the West
Side with canopied niches. West doorway has continuous hollow moulding in two
centred arch with ogee head and niche and foliate decoration to spandrel. The
doorway is flanked by crocketed pinnacles. The West window is of four cinquefoil
lights with vertical tracery pannelled surround and moulded label. Slender
ashlar faced spire with crocketing and pierced buttressing from the corner
pinnacles. Three tiers of gabled spire lights. Embattled nave with clerestorey
of four, trefoil lights in four-centred head to each side. South aisle has
raised roof but the wall material is mainly C14 and has restored C14 reticulated
tracery to the windows. South porch restored C20 incorporating medieval materials.
South chapel is also C14 and partly flanks the chancel which was extended in C15.
The East window has five cinquefoil lights, three stage diagonal buttressing with
panelled ends and a double moulded plinth, somewhat similar to the West tower.
There is a crypt below the East end of the South chapel. Three small openings
with trefoil cusping to two centred arches. Interior. Vaulted tower with large -
circular opening for bell ropes. Tall tower arch on high base with embattled
shafts to responds. Nave in four bays, North arcade mainly C13 with two centred
arches of two hollow moulded orders on round columns with moulded capitals. The
bay to the West is probably C15 and was added when the tower was built. The
West bay of the South arcade is similar to that of the North arcade, but the other
bays are C14 and have two centred double chamfered arches with broach stops on
hexagonal columns. Chancel arch is C13, and similar to those of North arcade.
Nave roof is C15 and has cambered and moulded tie beams on jackposts. The chancel
roof has the date 1744 to one tie beam, although this is probably a renewal of a
C15 roof which was added when a clerestorey was inserted in C15. Monuments:
Sir Harry Wakelyn Smith (of Harrysmith and Ladysmith); a native of Whittlesey with
bust by G. G. Adams, 1862.