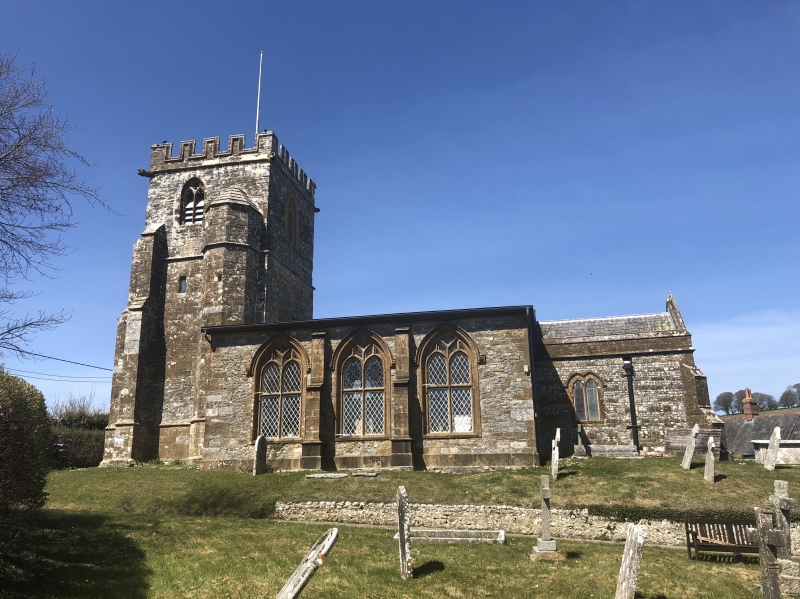 Parish Church. C14 Chancel and nave. C15 West Tower and North Porch, now
Vestry. South aisle added in 1891 when chancel also restored. Further
restoration in 1894-5. Dressed stone and banded stone and flint walls.
Slate and lead roofs. Chancel has a Ham stone parapet above the string.
North wall has two early C14 windows, with trefoiled ogee lights. South wall
has a 2-light window, trefoil-cusped with a label, all C19 restoration. East
window, C19 in Perpendicular style, 4-lights with cinquefoil cusping and
panel tracery. Nave, north wall, two windows largely late C19, but incorpor-
ating C15 material. Near the west end of the wall are the lines of a blocked
window with a 2-centred head. North Porch has a C14 outer archway with
chamfered jambs and segmental pointed head, now blocked and with a C20 window.
West Tower: early C15, 3 stages, with set-tack buttresses, an embattled
parapet and gargoyles, West doorway has moulded jambs, and two-centre arch,
with upper plinth moulding carried over as a label. West window of 4 trefoiled
lights with vertical tracery in a pointed head. Bell-chamber has in each wall
a window of 2 trefoiled ogee lights with a quatrefoil in a pointed head,
moulded reveals.