The Parish Church of St George

A Grade I Listed Building in Donnington, West Sussex 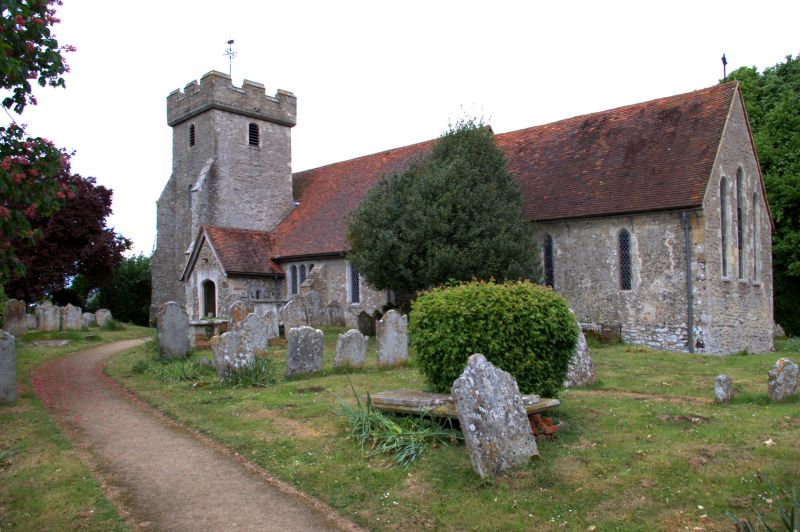 Parish church. Early C13 with early C16 tower, north chapel dated 1871 but replacing a chapel dating from 1542, refurbished after a fire in 1939, architect Frederick Etchells. Built of Mixon stone rubble with tiled roof.
PLAN: Four bay nave with aisles, three bay lower chancel, south west tower, south porch and north chapel.
EXTERIOR: Three stage tower with moulded plinth, buttresses of two stages with sloping offsets at the SE and NW corners, crenellated parapet (dismantled and rebuilt in 1966) and single light windows set under four-centred arches. The cinquefoil head of the west window is original but the remainder restored. The gabled south porch has a four-centred arch and buttresses. Behind in the south aisle is an early C13 round-headed doorcase and the south aisle has three C16 style windows, replacements following the 1939 fire. The north aisle has a C16 doorway with a renewed head and renewed three light window in C16 style. The chancel south side has three C13 lancets, the east end has three C13 taller lancets and the north wall of the chancel has two C13 lancets. There is a gabled north chapel with lancet windows with a tablet below the east window inscribed "Charles Crosbie Esq. Anno Domini 1871".
INTERIOR: The south west tower contains the original C16 half-winder staircase with solid treads of triangular blocks and three bells, one mid C16, one of 1594 and one recast in 1858. The nave has north and south arcades of four bays but the westernmost south bay was walled up when the tower was built in the C16. The arcade arches are two-centred with plain chamfered mouldings and circular moulded capitals, alternate circular and octagonal piers and moulded bases. To the east of the south doorway is a stoup set under a chamfered arch. The chancel arch is similar to the nave arcades but the inner orders rest on corbels while the outer ones die into the walls. In the east wall of the nave, north of the chancel arch, is a small recess with a chamfered head and jambs decorated with a simple roll-moulding near the base to the south. The nave roof has oak ribs replaced after the 1939 fire. The octagonal stone font with wooden font cover is by Frederick Etchells and the pews and pulpit (the latter incorporating some older panels) are of the same date. The north or Trinity chapel is a C19 rebuilding of one which existed as early as 1542. In the centre of the north wall is a c1779 monument to John Page, MP for Chichester, and his two wives. This is in the form of a large sarcophagus of grey and white marble with a coved top surmounted by an urn. This has Ionic columns at the sides, a frieze of palm and oak sprays and a central oval medallion flanked with drapery. Against the south wall is another large monument to Katherine Page of circa 1795, a Classical style marble monument with a coved top surmounted by an urn and oval inscription panel flanked with drapery. There are two unnamed and unsigned marble busts c1840 of a lady and gentleman of the Crosbie family set on marble pillars. There are four C19 marble wall tablets to the Crosbie family and three C18 floor slabs to the Page family. The chancel has lancet windows to the north and south sides with chamfered rere-arches and deep splays. The east wall has three lancet windows set in roll-moulded openings with continuous heads and jambs and a continuous mouled label. There is a moulded stringcourse at cill height running around the north, east and south walls of the chancel and a double piscina with a trefoiled, roll-moulded head. The roof of three bays, possibly C16, has original pegged rafters, staggered purlins and two chamfered tie beams.

REASONS FOR DESIGNATION:
* Despite the replacement of the nave roof and some internal woodwork after a 1939 fire this is a substantially intact early C13 parish church with early C16 tower and C19 chapel.
* Interior features include medieval arcade and chancel arches, stoup and piscina, a rare surviving C16 solid tread half-winder staircase to the tower and good quality C18 and C19 monuments.