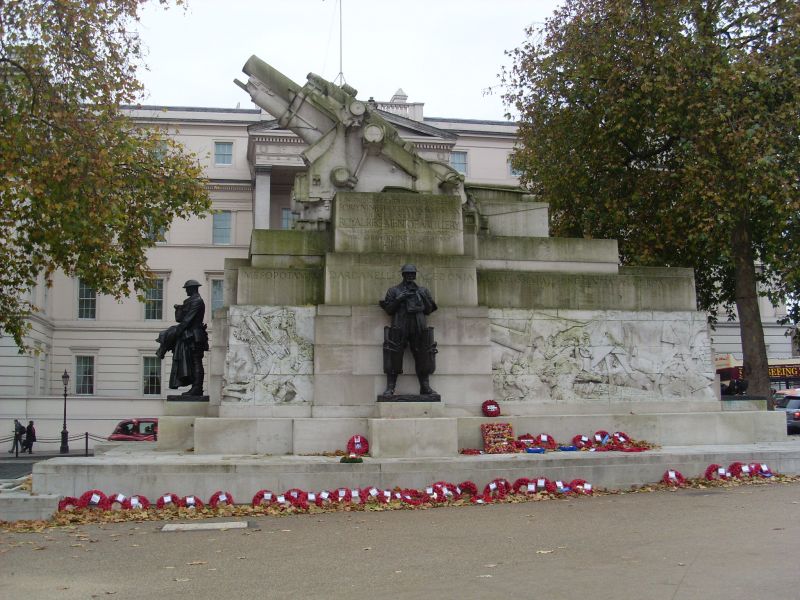 DESCRIPTION: Jagger’s original conception consisted of “a very simple idea, a big powerful howitzer on a base which would be characteristic of an emplacement”. Pearson designed a cruciform base on a several-stepped lower base, and stepped-back upper sections; the four bronze statues are supported on projecting blocks. The four bronze figures depict (north) a recumbent corpse, draped in an overcoat; (south) an Artillery lieutenant, holding an overcoat; (east) a carrier, sporting shell panniers, with outstretched arms; and (west) a driver, wearing a cape and heavy protective boots. Around the principal level of the base is a frieze depicting front-line active service. North-east: a heavy battery of 60 pounder guns in action; south-east: anti-aircraft gunners; south-west: shell-spotting and signallers; north-west: bringing up a horse-drawn 13 pounder battery into action. On top of the base is a stone depiction of a 9.2 inch howitzer.

INSCRIPTIONS: east and west sides of the projecting arm of the base read, in Roman Capitals, IN PROUD REMEMBRANCE OF THE / FORTY NINE THOUSAND & SEVENTY SIX / OF ALL RANKS OF THE / ROYAL REGIMENT OF ARTILLERY / WHO GAVE THEIR LIVES FOR KING / AND COUNTRY IN THE GREAT WAR / 1914-1919. Around the upper level of the base run the names of countries in which the RA served: some are repeated. Running clockwise from the north-east end, they are FRANCE. AFRICA. PERSIA. EGYPT. CENTRAL ASIA. PALESTINE. RUSSIA. ITALY. INDIA. ARABIA. MESOPOTAMIA. FLANDERS. [south end] FRANCE. AFRICA. PERSIA. EGYPT. CENTRAL ASIA. PALESTINE. RUSSIA. ITALY. ARABIA. EGYPT. MACEDONIA. DARDANELLES. FLANDERS. Below the corpse is the inscription HERE WAS A ROYAL FELLOWSHIP OF DEATH, taken from Shakespeare’s Henry V, and suggested by the sculptor. On the north end is a further inscription referring to the roll of honour buried below. To the south are additional inscription panels commemorating the 29,924 losses of the regiment in the Second World War, added in 1949.

The Royal Artillery War Commemoration Fund established a sub-committee for the erection of a war memorial in May 1919, and secured a site on a traffic island at Hyde Park Corner from the Office of Works. Early in 1921 it turned to the former infantry officer, Charles Sargeant Jagger MC, for a design which specifically depicted the role of artillery in the Great War. This was produced in association with the architect Lionel Pearson (of the firm of Adams, Holden and Pearson): royal assent was granted in Sept 1921 and a contract let in March 1922 (revised Nov 1924); a definitive design was presented in 1923. The orientation was revised so as to point the gun towards the south, on the advice of Sir Edwin Lutyens and Sir Reginald Blomfield, rather than directly towards the Wellington Arch.

It was finally unveiled on 18 October 1925 by HRH Prince Arthur, Duke of Connaught; such were the demands of finishing the commission that Jagger suspended work on all other projects for six months thereafter. The memorial’s initial reception was mixed: Lord Curzon notoriously dismissed the memorial as “a toad squatting, about to spit fire out of its mouth... nothing more hideous could ever be conceived”. However, Jagger was soon awarded the Gold Medal of the Royal Society of British Sculptors, and elected an Associate of the Royal Academy shortly after. The memorial was well-received by the regiment and by veterans at large, and it has steadily risen in critical esteem.

The memorial depicts a 9.2 inch howitzer, a form of heavy field gun introduced in 1914. Figures characteristic of the Royal Artillery stand on three sides. Artillery played an increasingly central role in combat in the First World War, with over 70% of casualties on the Western Front being caused by shellfire. Although generally positioned behind the front line, service for gunners was extremely hazardous owing to the effectiveness of enemy counter-battery fire. Service in the Royal Artillery was extremely arduous too: the physical exertion required in operating guns is strongly sensed in the figural sculpture. Jagger drew on his own wartime experience to create a memorial of vivid power, showing the dangers of modern warfare. He combined detailed depictions of the actuality with combat with stylized relief sculptures, which looked to ancient Assyrian sculpture and elsewhere for inspiration. The bronze figures, powerfully conceived, show Jagger’s characteristic technique of modelling in built-up pieces of clay, and leaving the surface finish unsmoothed and richly textured. The model for the officer was Jagger’s comrade in the Worcestershire Regiment, Lieutenant Eugene Paul Bennett VC. The recumbent corpse is a very rare feature on British war memorials. Having encountered initial reservations, Jagger was insistent on the inclusion of a dead Gunner among the figures, and even offered to pay for the casting of this figure himself.

Further inscription panels designed by Darcy Braddell were added in 1949 to commemorate the regiment’s losses in the Second World War. These were unveiled by HRH Princess Elizabeth. The memorial, which has suffered in particular from the steady erosion of its Portland stone reliefs through pollution and subsequent repeated cleaning, was conserved in 2011 by English Heritage, with support from the Bulldog Trust (see inscription stone to the south of the memorial).

The Royal Artillery War Memorial is listed at Grade I for the following principal reasons:
* Historical importance: a prominently located memorial to one of the principal units of the British Army, which forms an eloquent testament to the role of artillery in the First World War;
* Critical reception: this is now internationally recognised as one of the finest memorials to have been erected anywhere after the First World War. Its combination of sculptural force, boldness of conception, vivid narrative and humanity makes the memorial pre-eminent;
* Military interest: the memorial commemorates the 49,076 fatalities suffered by the Royal Artillery (the single largest unit in the British Army) in the First World War, along with those in subsequent conflicts. Its stylised figures and reliefs vividly convey the courage and endeavour required for front-line service in the Royal Artillery, while the dominant 9.2 inch howitzer is a vivid reminder of the role of fire power in the First World War;
* Sculptural interest: Jagger was among the leading sculptors of his day, and won an enduring reputation for his war memorials. This monument’s combination of heroism and humanity, and ready acknowledgment of the sacrifices demanded from wartime service, reflect Jagger’s own experience as a decorated veteran of the war. Stylistically, the contrasting figural and relief sculpture display his virtuosity in several techniques;
* Iconography: the reliefs form the most powerful (and detailed) depictions of fighting on any war memorial in England, while the detailed representation of a huge gun was a daring rejection of traditional modes of commemoration. The inclusion of an over-life size corpse was boldly direct and is also without parallel on any major British memorial;
* Architectural design: the memorial is an outstanding example of a fully integrated architectural design with a strong sculptural element. The strong forms of the base form a fine support to the huge howitzer located above, and form a fine foil to the reliefs;
* Group Value: located close to the Wellington Arch and Apsley House, the memorial forms the largest commemorative element in this prominent group of military monuments.