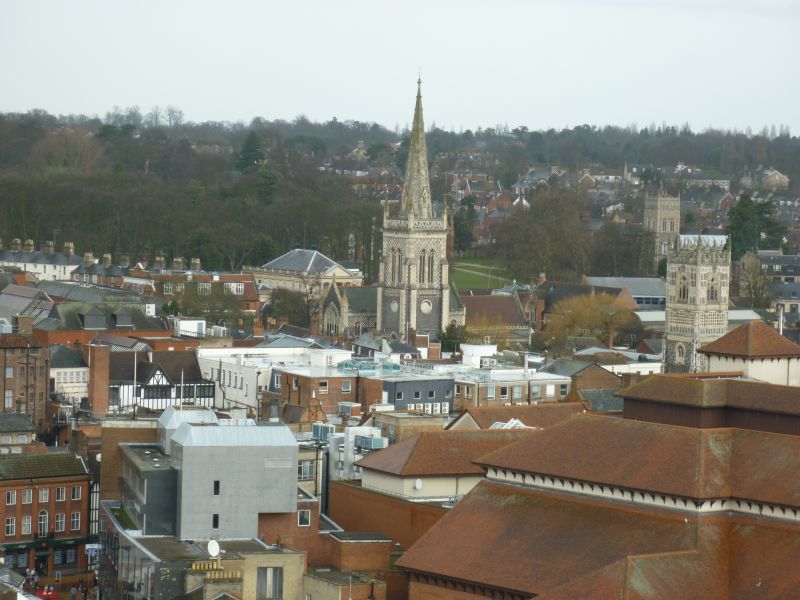 Church of medieval origins but largely rebuilt in the mid-C19. Designed by Richard Makilwaine Phipson.

MATERIALS: Built of stone and flint with tiled and leaded roofs.

PLAN: It comprises a tower above a south entrance, a nave, with north and south aisles, chancel, Lady Chapel, vestry and choir vestry.

EXTERIOR: The most impressive feature is the tower, with its recessed spire, which rises to a height of 53.5 metres, chequered flushwork and paired lancet windows to the upper stage, ornamental openwork parapets, pinnacles and angled buttresses. The north and south aisles have decorated stone pararpets; large buttresses of flint and stone, including angled buttresses at their east and west ends; and tall arched, tripartite windows, including one to the west end of each aisle. The nave has a battlemented parapet; a clerestory with round arched windows and chequered flushwork; and a west wall with two buttresses, tall pinnnacles and an arched quinpartite window. The chancel has a decorated stone parapet and a west wall with two angled buttresses and an arched, quinpartite window flanked either side by a carved stone niche.

INTERIOR: Internally, the church is largely of the C19 rebuild but it retains some medieval fabric: the nave has five-bay north and south arcades dating from the mid-C15; the chancel has a two-bay south arcade dating from the late-C15 to mid- C16; and the inner doorway, under the tower, dates from the C13 and was removed from the previous tower and re-erected in its present position as part of the C19 work. Other internal features of note include a fine C15 octagonal font carved with lions, installed during the mid-C19 rebuild; a richly carved oak pulpit of circa 1700, with a staircase and domed sounding board; four C15 and C16 monumental brasses in the centre of the chancel; C17 monuments, including one to William Smart, MP for Ipswich, painted on wood and showing a panorama of C16 Ipswich and another to Sir Francis Bacon, MP; an organ originally built in 1863-4 by Father Henry Willis (1821-1901), one of the most famous of the Victorian organ builders; choir stalls with elaborate carvings of the twelve Apostles and twelve angels by Richard Pfeiffer and with simply carved misericords. The stained glass in the west and east windows is by Clayton and Bell, the former showing the descent of Jesus through the kings of Judah and Israel and the latter the Ascension of Christ.

HISTORY: There is said to have been a church on, or near this site since at least the Doomsday Book and it was presumably built near a tower on the town walls. Although the present church has medieval origins, it is largely the result of a rebuild between 1850 and 1870 by Richard Makilwaine Phipson (circa 1827-84), at a time when Ipswich was experiencing a period of considerable prosperity.

REASONS FOR DESIGNATION DECISION:
This church is designated at Grade II* for the following principal reasons:
* The church retains important medieval fabric, most notably the north and south arcades of the nave and in the chancel.
* The C19th work is of good quality, with the tower being of particular note.
* It is largely the result of rebuilding by the eminent Victorian architect, Richard Makilwaine Phipson, who has a large number of listed buildings to his name.
* The presence in the interior of the fine C15 font, the pulpit of circa 1700,C15 and C16 brasses, C17 monuments and choir stalls with misericords.
* The church has group value with the Grade II* listed 19 Tower Street and the Grade II listed Ipswich Arts Theatre, Nos 13-21 (odd) Tower Street, The White House in Tower Church Yard, 2 and 3 Hatton Court, St Mary le Tower Church House in Oak Lane and the garden wall to No 9 Northgate Street.