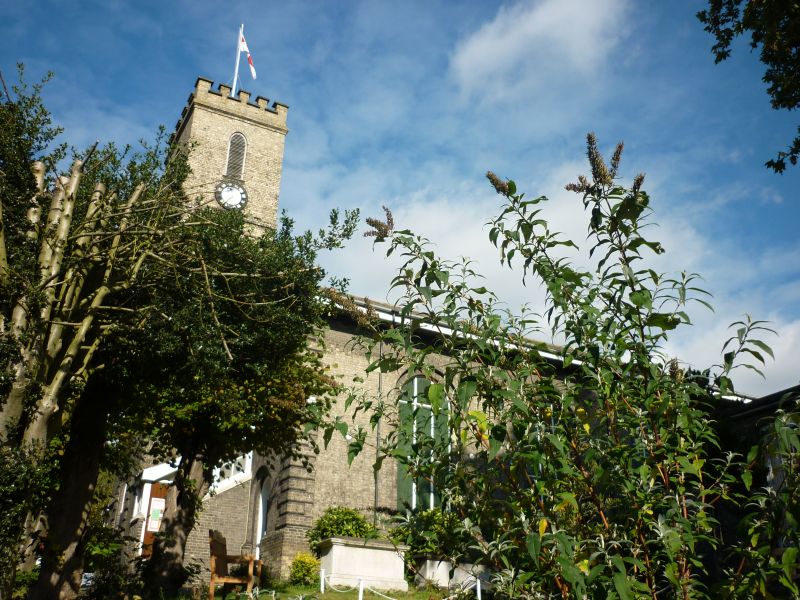 II
1835 by Frederick Harvey. Restoration in 1894-5 by E F Bisshopp when the chancel was added.

EXTERIOR: The original church consists of an unaisled brick rectangle with a W tower. Either side of this are sloping stairways, added apparently in 1894-5, to give access to the gallery. They have a timber superstructure on a brick base. The tower is tall, plain and unbuttressed. At ground level it has a round arched window with a Gibbs-style surround. The belfry windows are single round-headed lights and the top of the tower is crowned by an embattled parapet. The nave has four bays and is lit by large round-headed windows placed in shallow recesses: they have simple iron window frames with two mullions and two transoms creating a rectangular grid. The roof, of low pitch, overhangs the walls considerably. The corners of the nave are rusticated. At the E end the chancel is an addition of 1894-5 but closely follows the style of the nave, even to the use of similar windows (although narrower and with only one mullion). There are no parapets or clerestory on the nave and chancel.

INTERIOR: The walls are plastered and painted. The interior is the product of two phases, some sixty years apart. The footprint of the 1830s nave is still clear and this space is covered by its original flat ceiling pierced by three circular ventilators. In the 1890s the E parts of the church were built in an (internally) ornate baroque style which contrasts with the plainness of the nave. There are three round arches from the nave, the N one to a chapel, the wider and taller central one to the chancel, and the S one to an organ chamber. All have raised voussoirs. The chancel arch is the most lavishly treated and has pairs of detached columns in the responds and above these a deep, raised entablature. The arches to the chapel and the organ chamber are also given rich baroque treatment, including coffering on the soffits of the arches. Over the chancel there is a segmental-shaped ceiling divided into a series of square panels, each ornamented with a rose-like feature in the centre (painted in the 1960s). The ceiling over the chapel is flat and has plain square panels. At the E end the chancel has wall-panelling with a decorative frieze over.

PRINCIPAL FIXTURES: Little survives from the 1830s church although an iron plaque mounted outside on the W face of the tower records the building of the church in 1835 and names the architect. The Commandment boards in the base of the tower are probably also of the 1830s and appear to be made of iron slabs. The N, S and W galleries remain although reduced in length in their E parts in the 1890s. A second iron tablet on the exterior of the tower records the work of this time, names the architect and explains what was done The seating in the galleries was replaced along with that in the body of the nave at the 1894-5 restoration. This seating has pews with shaped ends: they still retain the pew numbers in small roundels. The stalls are quite plain and have panelled frontals. The pulpit is a fine C17-style piece of wine-glass design. The reredos in the chapel is an early C20 piece depicting the Supper at Emmaus. There are a number of simple wall tablets including a First World War memorial on the S wall. At the E end there is a fine, colourful stained glass window with themes from the Book of Revelation installed as a First World War memorial in 1920 and designed and made by L. Pownall of Falmouth, the brother of the vicar at that time.

ASSOCIATED FEATURES: The church hall to the SE, 1891, in a style that blends with the church, is separately listed (ref. 427443). Two brick gate piers N of the church have stone cappings and a curved iron arch spanning the two piers.

HISTORY: Holy Trinity was built and dedicated in 1835 as a chapel of ease to St Clement's church in Ipswich. It was the first church to be built in Ipswich since the Reformation and was erected at the expense of the Rev. John Thomas Nottidge who was patron and rector of St Clement's. Holy Trinity and St Clement's were made separate parishes in 1838. At that time Holy Trinity had some 750 seats, 250 of them being free. The designer, Frederick Harvey (1779-1861) was an architect and builder at Ipswich. Apart from Holy Trinity church, he designed Rushmere vicarage, Suffolk, 1827; St Helen with St Clement's school, Ipswich, 1843, and repaired and partly rebuilt the almshouses in High street, Needham Market, 1836. In 1833 he exhibited a design for a Gothic cast-iron aqueduct at the Royal Academy.

Developments took place in the 1890s with the building of a church hall in 1891 and a major restoration of the church in 1894-5. This involved an eastward extension to form the present chancel, N chapel and organ chamber/vestry, reseating and shortening the galleries. The work cost over £2000 and the architect was Edward Fernley Bisshopp (1850-1921), an Ipswich-based architect. He had been articled to Frederick Barnes, another Ipswich architect and went into partnership with him. He was architect and diocesan surveyor for Norwich from 1885.

REASONS FOR DESIGNATION:
Holy Trinity church, Ipswich, is designated at Grade II for the following principal reasons:
* It is a late Georgian brick church in a plain classical style. To this was added in the 1890s a new E end which is very sympathetic to the Georgian work externally and which has a rich baroque interior.
* It retains fixtures both from the 1830s and 1890s.