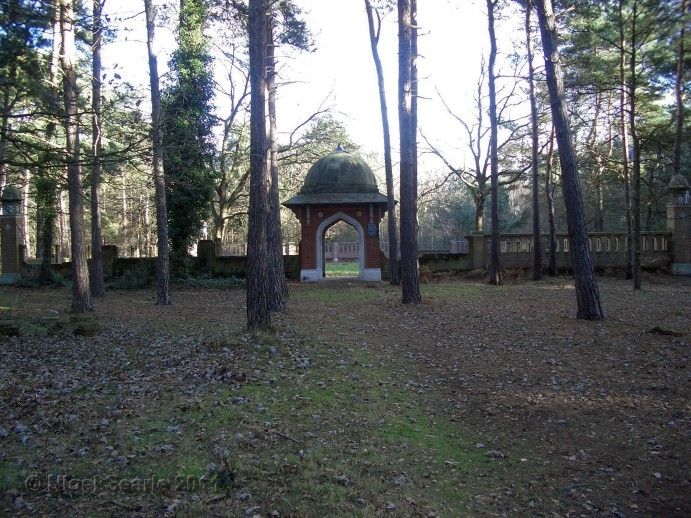 ENTRANCE: The burial ground is set amongst the pine trees of Horsell Common. The entrance, to the west, is in the form of a chattri, a red brick pavilion of square plan with prominent Islamic ogee profile arch entrance, deep overhanging eave, or chujja, on scrolled brackets and a central dome. The corner piers have stone bases. A circular flower motif marks the spandrels of the entrance arch, and a simpler circle motif is continuous in the circumferential band below the stone dome. The dome is designed in a beehive fashion with carefully cut stone blocks, set on an 8-sided stone ring supported by brick pendentives. The north and south sides have blind brick panels with moulded brick frames to the inside and the outside. A stone near the base of the north west side is inscribed: T.H. WINNY, A.R.I.B.A / ASHBY AND HORNER BUILDERS. Originally there were wooden gates with latticed pattern and finial growing out of a floral base, but these did not survive at the time of inspection (2009).

WALLS: Extending from the entrance are the walls approximately 8 feet (2.5m) high that form the rectangular enclose of the burial ground. These have a brick plinth and a cut-out arcade with ogee profile arches. The walls are divided into bays by brick piers stone capitals and bases about every 15 feet (4.5m). For one bay to the south of the entrance, and to the north of it, and much of the western stretch, the arcade has been lost to vandalism and deterioration in the late C20 and unsympathetically capped with concrete. The corners are marked by taller pillars with diamond shaped stone plaques embossed with flower to each face, and domed polygonal turrets above.

INTERIOR: Following the removal of the graves in 1968, the interior is now an open, grassy space, no longer consecrated ground but an evocative place nonetheless. Part of the original planting scheme survives: four plane trees, a traditional tree in Islamic garden design, in a rectangular formation in line with the corner pavilions.

HISTORY: Over one million troops from India, including what is now Pakistan, fought for Great Britain during World War I. Soldiers wounded in battle were brought to special hospitals on the south coast of England, in particular Brighton, and those who died received burial rites according to their religion. Hindu and Sikh soldiers were cremated in special crematoria at Patcham, Netley and Brockenhurst but there was not a special burial ground for Muslim soldiers until 1915. In this year, the War Office felt the need to respond to German propaganda that suggested Muslim soldiers were not being buried in a respectful way concordant with their religion. The propaganda, aimed at Indian Army troops serving on the Western Front, promoted the German alliance with Turkey as a holy war and tried to win over the support of Muslim soldiers. It was decided to build the burial ground in Woking because, at that time, it was home to the only purpose-built mosque in Britain (now listed Grade II*; there is not, otherwise, a direct relationship between these two buildings).

The burial ground was designed by T Herbert Winny, India Office Surveyor, and built by the local firm of Ashby and Horner Ltd.; the landscapers were Messrs Neal of Wandsworth. A proposed waiting room and mortuary seem not to have been carried out. Photographs from 1917 show extensive plantings (such as cuppressus in four varieties) around the inner and outer perimeter walls, as well marking four squares of lawn at the centre of which were four plane trees. The burial ground was completed by 1917 by when it had received 19 burials of soldiers who died between 16 July 1915 and 3 Feb 1916 (a further 25 Muslim soldiers were buried at Brookwood). The gravestones were simple Portland stone, with round arched heads facing west, according to Islamic tradition. Documentary sources from the time of its completion suggest that the Viceroy and the India Office were keen to reproduce images of the burial ground and publicise its opening, all with a view to counteracting the negative propaganda, which was shown to be so false by the provision of this special consecrated place. The War Graves Commission took over the burial ground's upkeep in 1921. The cemetery was used again during World War II when a further five Muslim soldiers were interred at Woking. In 1968, due to vandalism, all the burials were moved to nearby Brookwood Cemetery (Grade I on the Parks and Gardens Register). There are few comparators with this special structure, although a connection can be made with The Chattri (q.v.) at Patcham, Sussex of 1921, dedicated to Sikh and Hindu soldiers who were cremated nearby after dying in hospital in Brighton.

REASONS FOR DESIGNATION
The Muslim Burial Ground is listed at Grade II for the following principal reasons:
* Special historic interest as a rare purpose-built structure for the Muslim community in England at this early date (another early example, the Shah Jahan Mosque of 1889 and listed Grade II* is also in Woking);
* A commemorative architectural witness to the Muslim sacrifice in the First World War;
* Special architectural interest for its interpretation of Islamic architecture in early C20 Britain, inspired by the Mughal style so successfully employed by Sir Edwin Lutyens in New Delhi.