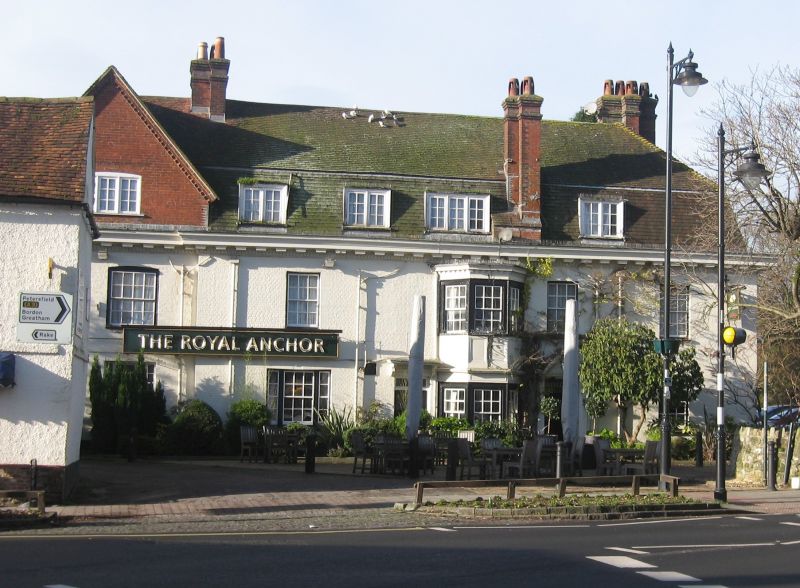 BRAMSHOTT & LIPHOOK THE SQUARE
SU 83 SW
Liphook
6/25
Nos 9 and 11
16.3. 54 (Royal Anchor Hotel)
GV II
Hotel, former coaching inn. Early C18, and late C19. The two main facades are of
painted brickwork in header, Flemish and English Garden wall bonds, with rubbed
flat arches, plinth; at the rear are rendered walls and some sections of rubble
stonework with brick dressings. The tilde roof is a mansard for the main block and
plain elsewhere: There is a massive eaves cornice with modillions and bold egg and
dart moulding. The east front is two storeys and attic, 1.1.3.2 windows (with a
two-storeyed bay in the middle): the north elevation is symmetrical of two storeys
and attic, 1.3.1 windows (again with a two-storeyed bay, wider and set within a
projecting centrepiece). Sash windows, casements to dormers. There are three
doorways, but the main entrance has a C18 doorcase, with a pediment (enclosing a
small coat of arms) on console brackets, thin pilasters, an arched opening with
radiating fanlight, panelled reveals and later half-glazed door. Projecting from
the upper panel of the bay is a wrought-iron sign bracket, with scroll ornament.
The rear is irregular in plan and elevation, showing features of the early and late
C19, and there is a service of one storey, with stone walls. Interior: there is a
Jacobean door (a present from Queen Victoria). Of medieval origin, the building
was important as a coaching station on the London to Portsmouth road, and the
present building is known to have served Nelson (on his way to Trafalgar) and
Wellington and Blucher (at the end of the Napoleonic War).