A Grade I Listed Building in Ledston, Leeds 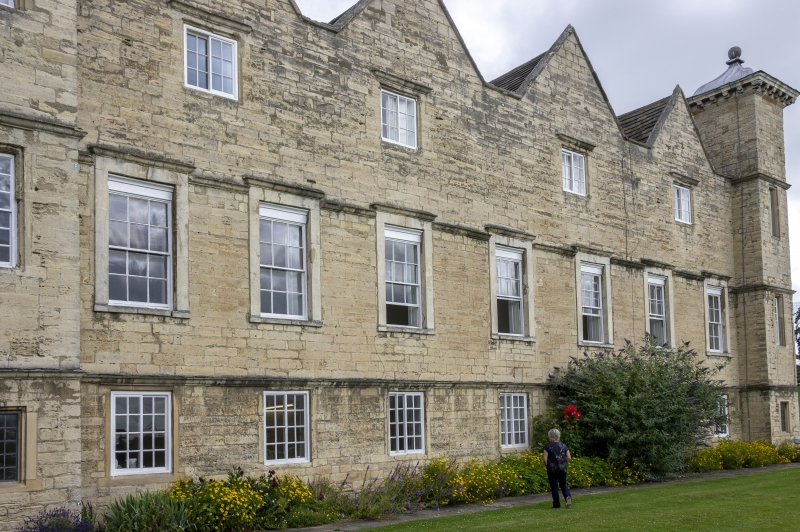 Country house, now partly subdivided as flats. Five periods of building,
beginning c.1200 with a chapel and kitchen built by the monks of Pontefract
Abbey, with an extension c.1500; after the Dissolution, acquired by the
Witham family, who incorporated these parts in a courtyard house of modest
scale, c.1560; this in its turn was subordinated to a grandiose scheme in the
C17, first by Thomas Wentworth, Earl of Strafford, c1630, who added the south
wing, and subsequently by Sir John Lewis, c.1660, who completed the structure
by extension to the north of the main range and the addition of the north
wing; to this, in the early C18, Lady Betty Hastings made some stylistic
alterations to the principal facades, and probably to the interior also;
finally, some interior alterations appear to have been made in the C19 and
C20.
U-plan, round a forecourt facing east, with the earlier elements projecting
to the rear. Mostly 2 storeys over a basement with gabled roofs presented
as attics, and corner turrets. A string course carried round the whole marks
the division between basement and piano nobile, and the turrets have similar
string courses on 2 levels above. The principal range, which is of 11 bays,
symmetrical, has a straight flight of steps protected by a wrought-iron
balustrade with Lady Betty Hastings initials worked into it, leading to the
principal entrance in the centre of the piano nobile; the doorway has glazed
and panelled double doors, and a moulded architrave with carved consoles
supporting an entablature and open segmental pediment from the centre of
which an eagle displays a medallion with a monogram on the pedestal beneath;
in a vaulted passage below the steps is a doorway to the basement, with a
moulded architrave; the basement has recessed cross-windows, the piano nobile
has 24-pane sashes with plain surrounds, the second floor has square 12-pane
windows with similar surrounds, those to the right moslty horizontal sliding
sashes and the others fixed (some blocked behind the glazing); and the roof
line is disguised by 5 Dutch gables containing vertical oval windows glazed
in quadrants, with architraves, the gables finished with small pediments
alternately triangular and segmental. The wing courtyard returns, both of
4 bays, have similar features except that each has a pedimented doorway to
the centre of the basement and the south (left) wing has a 2nd door with
architrave and keystone. The four corner turrets of the wings each have tall
narrow sashed windows with double-recessed reveals, a blind top stage with
prominent modillioned cornice, and a low ogee-shaped pyramidal lead cap with
a ball finial; between the turrets each wing has 2 windows on each floor,
and one Dutch gable, all these matching the others. In the angles of the
wings are lead rainwater heads lettered "EH" (= Elizabeth Hastings), and
against the south wing is a small block of mounting steps.

The return wall of the south wing, of 7 bays, has a 1st-floor string course,
horizontal sliding sashes at basement level, 12-pane sashes at 1st floor, the
heads of which break through the string course and have cornices which match
it, 4 square horizontal sliding sashes at 2nd floor with similar cornices,
and straight gables above these (the first and fourth of slightly different
pitch). The rear of this wing has 2 gables, remains of a cross-window at
1st floor and an altered window or doorway beside this, and 3 inserted
windows above. The return wall of the north wing, of 8 bays, has
cross-windows on the first two floors, each with a string or drip course
above, 2-light mullioned windows at 2nd floor (irregularly disposed) with
cornices, and 4 Dutch gables; and at ground floor towards the east end a wide
archway with flat 4-centred head, imposts and keystone, the string course
stepped over it (opening into a recess approx. 1 1/2 metres deep, and now
partly blocked: (purpose not known). The rear, or west front of this wing,
of 5 bays, has a corner turret like those at the front, and fenestration
matching its return wall, with 3 windows at 2nd floor with Dutch gables above
them.

Projecting to the rear is the C16 building incorporating the medieval fabric.
It is rectangular in plan, formed by 3 ranges enclosing a small inner
courtyard, and 2 storeys, with string courses on 2 levels and 2 square corner
turrets. The south range, containing the medieval chapel at 1st floor
(altered as parlour, see below) with ground floor undercroft, has in its
south wall 2 deeply-chamfered square-headed lancets and a 3-light mullioned
window at ground floor and 4 irregularly disposed cross-windows above, and in
its gable end (the right-hand part of the west front) 2 similar lancets at
ground floor and one cross-window above; further left this front has a
Tudor-arched doorway approached by steps, with a bell in a square opening
over it, 2 circular windows and 3 cross-windows, and at 1st floor 3 other
cross-windows. There is a parapet to the west range, linking the gables of
the north and south ranges. The corner turrets, of 3 stages, have narrow
windows in the outer walls; those at 1st floor divided by transoms. The
north range has 2 cross-windows on each floor, those at 1st floor coupled, a
narrow window on each floor close to the junction with the main building; and
a larqe chimney on the ridge.

Interior: development history obscured by successive alterations, but the
principal range of the C17 building appears to incorporate the front range of
the C16 house in altered form, the room to the left of the main door being
its hall, with a massive external chimney stack to its rear (courtyard) wall
and remains of a stone arched fireplace visible in a cupboard in this wall;
the medieval chapel, converted to a parlour by the Witham family (known as
Lady Betty Hastings' parlour) has a wooden fireplace surround and overmantel
in Renaissance style, and moulded plaster ceiling with pendants, both dated
1588, and C17 panelling; the dining room in the south-west corner of the
south wing has restored C18 panelling and fireplace, and in its rear wall a
black marble buffet framed by pilasters and an entablature with cornice; the
northern part of the main range is double-pile, a central ccrridor running
through it with massive stone architraves to the doors on both aides; there
is an elaborately decorated cross-corner fireplace in the closet at the
south end of the hall, and 2 others in closets at the east end of the south
wing (now flat).