A Grade I Listed Building in Kingswood, Gloucestershire 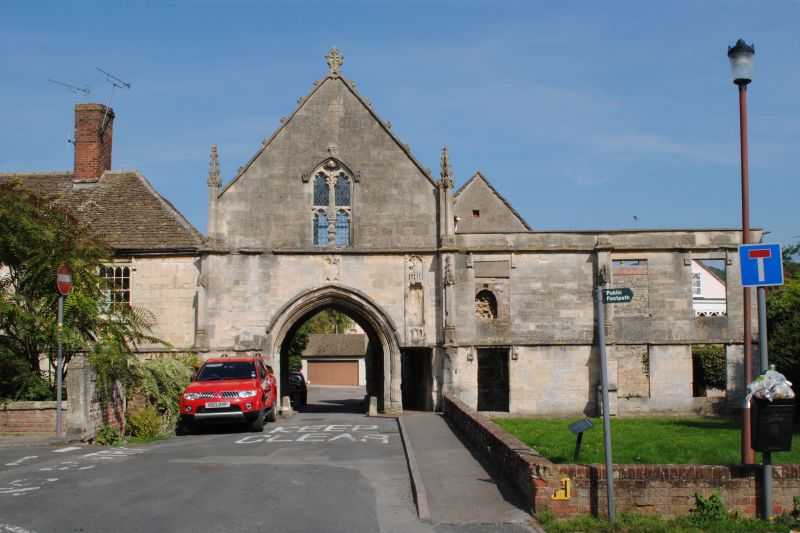 
Abbey Gate-house. Early C16. Ashlar with Cotswold stone slate
roof. 2 storeys. Central large moulded pointed arch, with slit
window opening to left, additional smaller arch to right with
straight head to south and niche above, and pointed arch to north
at rear, 2-light mullion and transom window with 4 equal sized
lights over main arch. Niche has carved side colonnettes and
elaborate crocketed canopy which once held a statue, probably of
the Virgin, with a carved dove above. Window has highly decorative
lily carved on main mullion and carved pointed hood mould. 2 side
buttresses with diagonally set small square piers at first floor
level with crockets, and pinnacles with crockets. 2 string
courses. Gable verge has crockets and finial depicts carved
Crucifixion scene.
Interior of gateway has lierne vault with carved bosses in passage,
rear has relieving arch spanning both archways, with some mouldings
remaining, and upper storey faced in boards and with C20 window
inserted. Room above passage of 2 bays with 2 tiers of arched wind
bracing and additional unbraced upper tier, blocked 2-light trefoil
head stone mullion window on west side and stepped window seat to
large south window. Room reached from moulded 4-centre stone
archway immediately to right at rear of gateway which has narrow,
chamfered Tudor arch adjoining and remains of pointed stone
relieving arch over with corbel to left, apparently all part of the
original fabric of the gate-house.
To east of gate-house on south side, former cottages now curtain
wall only and part of the original fabric of the gate-house. 2
storeys, 3 window openings with square stopped hood moulds at each
end on first floor and on door opening to left on ground floor.
Central buttress with diagonally set pier similar to main gate-
house buttresses but without pinnacle. The Gate-house and flanking
walls are all that remains of the Cistercian Kingswood Abbey and
are scheduled as Ancient Monument No. 70. (David Verey, Buildings
of England - Gloucestershire: The Vale and the Forest of Dean,
1980).