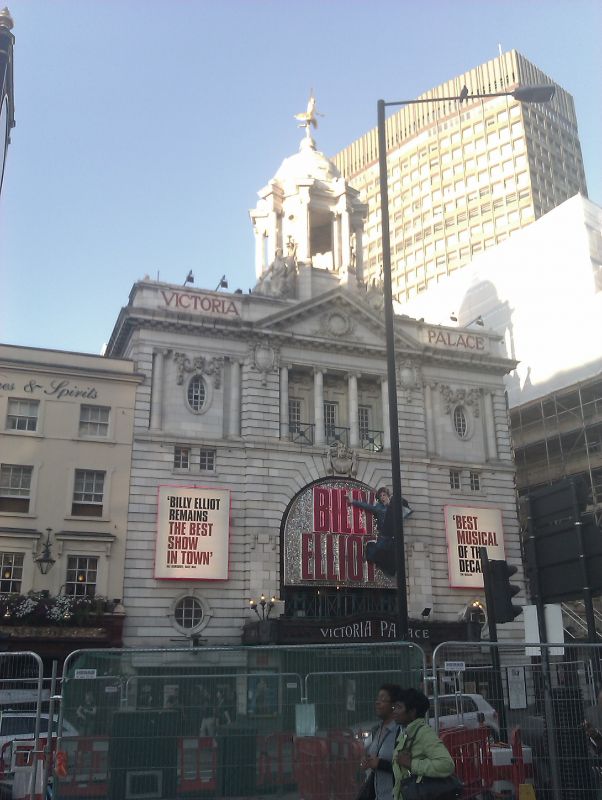 II*
Theatre. Built 1911 by the variety magnate Alfred Butt, to the design of Frank Matcham. Builders Henry Lovatt Ltd. Extended 2000.
PLAN: Comprises deep frontage block 3 bays wide and 3 bays deep. 4 storeys plus basement and concealed attic. The bay at the very centre of the block was originally 3 storeys, with lantern and lightwell above, now floored over. Entrance lobby leads through to central foyer and large auditorium to N with dress circle and gallery. Outer bays contain separate stair compartments, serving the dress circle to right (W) and gallery to left (E). Grand stair in rear bay of foyer leads down to stalls on left and up to dress circle on right. Above the foyer is a series of bars: at first floor the dress circle bar (originally the Ladies' Tea Room or Adams Room); at second the Tudor (originally 'Old English') Bar, accessed by an enclosed stair at the rear of the dress circle, and at third bar only one bay deep serving the gallery; this was extended rearwards over the roof and lantern of the Tudor Bar in 2000. A former manager's flat at attic level is now offices; this too was extended rearwards in 2000. A basement bar is now much altered. At ground floor, to the E of the main building in what was an pre-existing building, is the former 'stalls saloon' bar. In front of this is a second foyer, installed in 2000 in the former gallery queuing yard, which is interlinked with the main foyer.

EXTERIOR: Baroque style. Symmetrical 3-bay front with broader central bay. Central entrance with original polished hardwood glazed doors with curvilinear glazing bars and bevel-edged glass. Cantilevered entrance canopy with coloured glass front bearing theatre name dates from 1927. Doors to staircases to either side. Central bay projects slightly with great niche rising through first and second floors with key bearing female bust. Now obscured by advertising, the niche has a balcony with tripartite windows with French doors to central bay and decorative iron balustrade, above which is a decorative typanum with an oval window. Open loggia with Ionic columns to third floor; flanking pilasters have cartouches to tops; pediment over. Plain frieze; parapet bears theatre name in red faience lettering. Stair windows to either side of niche on 3 levels comprise keyed oculi to ground floor, and paired square-headed windows to mezzanine and first floor. Oval windows to third floor with cherub-head keystones and swags, flanked by niched Ionic columns. Rich modillion cornice. Parapet bearing 2 over-life-size female figures, and urns to each corner. Crowning octagonal Ionic cupola in manner of Wren, bearing gilded figure of Anna Pavlova (replicated from original taken down in 1940 and lost). To right (E) is a single-storey triple-arched entrance with a balustraded parapet bearing the theatre name, formerly leading to a queuing yard for the gallery, now the entrance to the 2000 foyer extension.

INTERIOR: Entrance lobby has fine inlaid polished wood doors to either side, including a former one-person lift door to left. Inner set of doors identical to those of main entrance. Lobby, foyer and staircase ceilings are decorated in the neo-classical manner with enriched beams and ceilings. Foyer walls are faced in grey marble with gold mosaic banding. Two pairs of coupled Doric columns clad in white Sicilian marble support the beams, with pilasters to walls. A roundel in the central bay of the foyer ceiling was originally open to the dress circle bar above, with corresponding open roundels in the ceilings at the two levels above, lit by the roof lantern. These have been infilled. Grey marble stair with green marble string has massive openwork balustrade, inset with decorative brasswork. Coupled Ionic columns to dress circle half-landing and to main landing, corresponding with foyer columns below. Walls of stair and dress circle landing have mirrored panels framed in enriched plasterwork. Main landing overlooking stairwell has curved balconet carried on a cul-de-lampe, with brass balustrade. Dress circle bar is decorated in Adamesque manner, and has panelled walls with arched recess to W wall. Ceiling roundel (originally open) with fluted coving. The curved corridor at rear of dress circle (now the Long Bar) is panelled.
Auditorium decorated in a rich Baroque manner, with cartouches, cherubs, swags etc to gallery and box fronts; fielded panelled walls. Square proscenium arch with splayed panelled architrave decorated with egg-and-dart and reeded strips, segmental pediment with ornamental panel in tympanum forming garlanded medallion with monogram 'VP'. Two tiers of 3 boxes to either side; upper boxes with pilastered round arches and bombé fronts; lower ones are stepped down towards proscenium (a feature introduced by Matcham in his later theatres to improve sightlines), divided by columns, and carried on elaborate consoles. A solecism is the manner in which the gallery and upper boxes are linked: by a pendant bell-shaped feature with a porthole for a followspot, framed in Ionic pilasters, with a balconet above. Walls rise to modillion cornice; deep coved ceiling with roundels and lunettes above boxes; large elaborate dome. To rear of dress circle is a set of alcove seats behind arched timber screen and balustrade. The stage does not have machinery of particular note.

Staircase from rear of dress circle to Tudor bar has oak imitation timber framing and beamed ceiling with plaster rinceaux cornices. Stair with splat balusters and square newels bearing bronze lamps. Tudor bar interior also has decorative timberwork with inset painted panels of knights and ladies. Beamed ceiling has strips of decorative plasterwork with rinceaux and rose bosses; there are similar plaster panels in the walls. Central beam and bar alcove have elaborate consoles with carved lions and masks.

The interior throughout retains much original joinery and many decorative features, including mahogany doors, signage, and brass wall ashtrays. Staircase to E of foyer clad in turquoise and green tiles; that to W in more utilitarian brown glazed brick. Stair windows have stained glass.

The former flat at top level contains offices. The interior of the foyer extension dates from 2000. These areas are not of special interest.

HISTORY: The period c1880-1914 saw a massive boom in theatre construction, and in particular new 'variety theatres' for popular entertainment. These continued the music hall repertoire but were funded by entrepreneurs rather than licensed victuallers. The impetus for this new generation of theatres came from tighter safety regulations, coupled with a moral drive to separate popular entertainment from the consumption of alcohol, and led to the demolition of many older music halls built from the 1840s onwards, which were essentially drinking halls. The new music halls (the term endured well into the C20) were indistinguishable from drama theatres in their design, providing family entertainment in comfortable, fully-seated accommodation, opulently decorated, with no drinking in the auditorium. Construction declined in the 1920s however in the face of competition from the talking movies.

The deep frontage gave Matcham scope for larger foyer spaces than were usual, and the Victoria Palace resembles at least two other contemporary theatres, Matcham's London Palladium (1910) and Massey and Young's Wimbledon Theatre, (1910), in having a planned suite of public rooms rather than a single first-floor bar. The Victoria Palace however was exceptionally well-served in this respect

Sir Alfred Butt (1878-1962), one of the leading variety magnates of the early C20, forged his career at the Palace Theatre of Varieties, Cambridge Circus under Charles Morton as company secretary in 1898, and manager on Morton's death in 1904. He made the Cambridge one of the most successful theatres of its time, introducing novel and lavish entertainments and foreign performers, including Anna Pavlova. In 1910 he assumed control of the deceased Thomas Barrasford's circuit of halls, and created the Variety Theatres Controlling Co Ltd in partnership with Walter de Frece; he was also involved in the management of several West End theatres including the Globe and the Adelphi. He built two theatres: the Glasgow Alhambra (1907) and the Victoria Palace, London.

The boom produced a number of specialist theatre architects, of whom Frank Matcham (1854-1920) was the outstanding figure, and the most prolific. He designed or remodelled at least 120 theatres in Britain, and undertook alterations and improvements to many others. The Victoria Palace was his last major commission before retirement, and one of his finest later works.

REASONS FOR DESIGNATION: The Victoria Palace Theatre is designated at Grade II* for the following principal reasons:
* Of more than special interest as a fine and exceptionally well-preserved theatre designed by Frank Matcham, the master of late Victorian/Edwardian theatre design, for the renowned variety magnate Alfred Butt;
* High-quality faience-clad exterior in the Edwardian Baroque manner surmounted by an imposing cupola and statuary;
* Lavish array of interiors, including the splendid foyer, grand stair and auditorium, and series of public rooms. At no other theatre was there such an array of public spaces, each designed in a different style, here encompassing the Baroque, Adamesque neo-classicism, neo-Tudor, with touches of Art Nouveau. The Tudor Bar is a remarkable room, unique in a theatre now, if not then;
* Wealth of original joinery, fittings and decorative features;
* Historic interest as one of the capital's most renowned variety theatres, now a major musical venue, the successor to the Royal Standard, a well-known Victorian music hall. It continues the tradition of entertainment on this site since the 1830s, possibly the longest such in London.